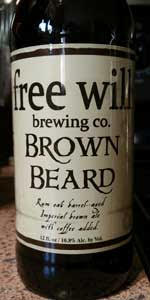 2016 bottle. Pours a pretty garnet-tinted brown color with a thin half-finger of tan head. Smells of fruit cake and figs with a strong undercurrent of strong, dark coffee. Medium to light bodied, and relatively still in the mouthfeel, with just a little chewiness to it. Interesting taste with the fruity rum flavors up front, the coffee flavors and milk chocolate notes far behind, a bit of alcohol burn on the back end, and a dull, stale-hop bitterness in the aftertaste. With the fig notes, this almost tastes like a light-bodied quad. Pretty tasty.

I held off on drinking this for a bit until I had an opportunity to review it with a completely fresh palate, expecting a lot of complexity and nuances. Instead it's rather quite straightforward in following the description on its label almost to the point of being heavy-handed: "Rum oak barrel-aged Imperial brown ale with coffee added".

You clearly get the coffee in the nose, followed by a chocolate fudge-like malt and a light whiff of alcohol and oak.

The flavor clearly displays the big maltiness of the brown ale, and I initially felt it was a bit too much, and a touch too sweet - although a few sips into it I changed my mind about that, thinking of it more as a "sipper" than a straightforward "drinking" beer. I could certainly see sitting by the fire on a cold winters night with one of these. That said, the rum and the oak appear as well, and I find it hard to believe that that much rum was still contained within the wood (perhaps some was added to the barrel to 'freshen it' a bit prior to filling? It lends a nice 'spiciness' and cuts through the rich malt midway. The coffee comes on towards the finish, and then lingers, and if there's an issue with balance I'd say that might be it. To my tastes the coffee is a bit stronger than it needs to be, over-riding the complexity in the blend between the cocoa-ish malt and the oak and rum. I'm left looking for that dry oak in the finish but what I get is more like a Coffee candy. Still, that's just my perception, and not an actual flaw, you'll have to take it for what you will.

Undated 2017 bottle into pint glass. Pours a hazy dark amber-brown with a thin tan head. Initial impression is blackstrap molasses, rum, and bitter coffee. Mouthfeel is a little on the thin side. Carbonation is light. Finish is boozy and astringent, like burnt coffee with a shot of rum in it. Not at all what I expected. The thinnish body makes the alcohol more evident than it should be, and the bitterness competes with the molasses and rum. Interesting but not something I'd revisit.

So I'm guessing this is c.o.b. in rum barrels, and it is tasty! Nose is not as balanced, tons of coffee and rum. Neato. The taste though brings us into layers of rum, coffee, cola, sugar cane, wood, vanilla, molasses, dark chocolate, nuts, and toffee. Feel is big bodied, hot with booze, yet more smooth than you would think. Nice work, a brown ale for early winter