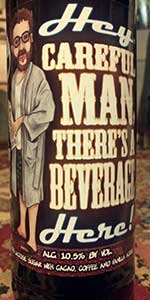 Notes: "Let me explain something to you. Um, I am not Mr. Regular Stout. You're Mr. Regular Stout. I'm the Dude. So that's what you call me. You know, that or, uh, White Stout, or uh, Milk Stout, or El White Russian Imperial Stouterino if you're not into the whole brevity thing." We aged this White Russian inspired white stout with cacao nibs, vanilla bean and cold pressed ipsento coffee. The beverage at the end of this process is beer that could turn anyone concerned with style categories into a nihilist. It is amber in color but has aromas and flavors of coffee, chocolate, vanilla, caramel and sweet malt. Delicious now or to cellar until Walter agrees to roll on shabbas (and that will be a while).
View: Beers | Place Reviews
Reviews: 37 | Ratings: 341 | Log in to view all ratings and sort
Reviews by BRami127:

I have no idea what's going on here, but I mostly want to commend whoever submitted the picture, for taking it on what appears to be a rug; it really ties the photo together.

Pours an amber color, odd even for a white or blonde stout; presumably, this is the influence of the coffee and cacao on the base white stout. The aroma is of vanilla, butterscotch, toffee, and creamy custard, with some boozy heat that never shows up in the mouth--that is an interesting trick. Once you take a sip, the beer is utterly smooth and creamy, more of a tongue-coater than expected from its consistency and modest legs.

The flavors are reminiscent of a White Russian, if you know the beer's intent. If tasted blind, I'm not sure I would get there. That said, it's a cool experiment and would still be enjoyable without the theme.

Liking what this brewery is doing, having a fun time with the naming of the beers, but not just making it a gimic (like some other unnamed breweries), and they're making great beer to go with it. Just in time for a good New Years Eve beer. This one being an homage to one of my fav movies, a white Russian like clone. F*ck it dude, let's go bowling.

Pours a small fizzy head with little lacing and some decent legs on the side of the glass, semi clear but a little hazy darker cranberry mahogany colored beer.

Nose is interesting, starting with tons of fresh coffee, freshly roasted and ground coffee grinds, fresh roasty coffee a little earthy and nutty coffee mostly. Then a chocolate aroma, light cocoa and dark chocolate, little lactose with the milk chocolate aroma, into plenty of vanilla, very vanilla like like the vanilla beans were aged in it for a while. Background aromas bring a little caramel and nutty malts, I think a bit of oats as well, little oatmeal smell. But mostly is the fresh roasted ground coffee beans.

Taste starts creamy with chocolate actually, cocoa nibs and baker's chocolate, but not a bitter dark chocolate, a little lactose flavor to go with it and a mik chocolate as well as chocolate milk. Then vanilla, lots of vanilla almost as if vanilla extract was poured directly into it. Coffee is plenty too but not quite as dominant as the nose had, again that freshly roasted and ground coffee grinds, cold extracted I believe since I don't get that acrid flavor or tannic notes from the coffee, and no burnt flavors at all but perhaps the coffee was a little over roasted. The coffee is a little nutty and earthy, and goes with the malt characters which bring a little nuttiness, and mild some creamy oat flavors and big chewy center. Mild warming booze comes through but not that much. All the flavors combine to a somewhat White Russian character, mostly the vanilla, lactose and cocoa nibs, as the coffee gets a little too earthy and roasty and strong, but still pretty tasty. Finish is a little creamy and that sticky dry lactose sugar feel as well, mild bitter coffee grinds lingering and more vanilla and creamy lactose.

Mouth is med to fuller bod, fairly creamy between the lactose and oats, mild warming booze, little sticky lactose, lighter carb but they probably wanted that for the whole White Russian drink feel.

Overall pretty good, all the flavors combine to a nice White Russian like flavor, although the coffee was a bit too strong but tasty, the oats and lactose made a nice creamy cream feel, coffee and cocoa nibs for the kahlua, and overall beer was a nice big flavorful drink that was enjoyable, and even the beer blended in nicely.