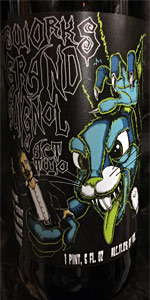 The lights are flickering on and off. Return to your seat. Act II in this macabre pantomime is about to begin with you or without you. It's always easy to act brave until Act II opens in front of you...

Strong blueberry jam on the aroma, good chocolate and roasted coffee beans on the background. That's a sweet, fruity but reasonably balanced stout. This makes me think of how well integrated Backyard Rye, Jam the Radar, etc. came out, and this is in that similar vein. If you enjoy fruit flavours in your big stouts, this will hit the spot. Coffee helps balance out the fruit and malt sweetness.

Grand Guignol Act II is black as coal while it produces a little gug from the bottle. There's a coffee brown ring around the surface of the glass when backlit but besides that, it's nightime in there. A crackling khaki head grows to a finger in height on a rather aggressive pour but quickly fades to a mere ring. It's a good looking beer but that foam dissipates rather quickly.

The nose on this guy is pretty smooth and inviting for such an alcoholic concoction. Soft, even raostiness gets things started with an undercurrent of macerated dark berries. Coffee and a splash of cream kick up in the middle. The blueberry comes through on the backend. I have to say, Pipeworks really achieved a natural, ripe blueberry presence. A little sweet, a little not. I feel like I can smell the oats in this beer, which is odd, since there's no way I usually can. It has a blueberry stone ground oatmeal thing going on that I really enjoy all wrapped up in a whisper of clean booziness.

The flavor follows the nose fairly closely but there are some separate twists and turns. The blueberry pops at the front before the softly roasted malt realizes that it's up to bat. Dark berries weave an undercurrent before the coffee (quality) and cream step in stride with the nose. The oatmeal quality isn;t quite as noticeable as the nose suggested but it is a bit oaty with a quality blueberry presence. The blueberry takes on a little sweeter note than the nose suggested but it works as the alcohol cuts it a bit on the swallow.

The body and mouthfeel are in a good place. The weight sits evenly between moderate and heavy. The carbonation is soft which provides a slick mouthfeel. There's a little sugary stick but it's in no way cloying. The booziness helps dry it out a bit on the swallow and there is a touch of roasty bitter left in its wake. Surprisingly drinkable for such a bruiser.

This is a solid beer adjunct laden imperial stout from the folks at Pipeworks. They did a fine job at pulling out natural blueberry essence. The coffee is even handed while the roast is soft and inviting. A nice balance of stoutiness overall. I would probably pick this one up again in the future.

BOTTLE: Purchased at a beer store in Brooklyn. 1 pint 7 fl oz. Brown glass. Paper label depicting an evil rabbit with the name of the beer drifting towards the Three Floyds model of "let's make it as illegible as fucking possible." Branded red pry-off crown cap.

HEAD: Tan colour head. Somewhat soft, somewhat creamy. Has a nice somewhat thick consistency and a good complexion. Not the softest, creamiest, silkiest head I've seen on a stout, but well executed in terms of retention (sticking around for a good 3-4 minutes, which isn't bad at 11% ABV). No lacing adheres to the sides of the glass as the head recedes.

BODY: Opaque black. No yeast or sediment is visible within.

It's a pretty typical appearance for an imperial stout. Not unique or special.

AROMA: Muted coffee roast is the first thing I notice, but it doesn't suggest a particularly vivid or expressive coffee character. I search for blueberries and I do find them. Dark malt sweetness. Chocolate malts. No roasted barley, burnt sugars/char, hazelnut, etc. This aroma suggests a somewhat simplistic imperial stout with a nice but not dazzling blueberry and coffee presence.

Aromatic intensity is quite mild for an imperial stout. No booziness or detectable off-notes. True to form, there's no overt hop presence.

TASTE: The blueberry is much more vivid in the taste than it was in the aroma, bursting a bit but in a manner distinct from that observed from mosaic hops; it's juicier and more forward instead of coming off subtle and seamlessly integrated. On the flipside, the coffee - which was the first thing I noticed in the aroma - is strangely reticent in the taste, barely offering up any java character or roast. It's quite muted, lacking the vividness and expressiveness you'd find in the coffee character of the best coffee (imperial) stouts.

Dark malt sweetness provides the backbone, joined by some mild specialty chocolate malt sweetness. There's no roast (either from roasted barley or coffee) to balance out the sweetness with some bitterness. The build feels imbalanced as a result. Depth of flavour is limited. Flavour duration and intensity are average.

Quite simplistic for the style, though not unenjoyable. I find no off-flavours or overt booziness. I do like it for what it is; it's just reticent and somewhat muted.

TEXTURE: Oats do smoothen it out, bringing it nearer to the smoothness and wetness you'd expect in an imperial porter than the dryness and coarseness you'd expect of an imperial stout. That suits the blueberry better than it suits the coffee; maybe this mouthfeel is partially to blame for the coffee's faintness. Medium-bodied and a little thick given its relative lack of flavour. Flirts with syrupy.

OVERALL: A bit of a shrug of an imperial stout from Pipeworks, failing to deliver as a coffee stout, oatmeal stout, or imperial stout. The blueberry is the highlight for me, but it isn't enough to make this memorable. Act Two is infamously where many literary efforts fall apart; in that sense, I guess Pipeworks has been true to this beer's premise. The kind of beer that would be at home as part of a Sam Adams seasonal variety box.

Pours black with no head in my glass. Smell is roasty and coffee.

Taste is roasty and coffee, but with a surprisingly gentle fruity sweetness. Blueberries are clearly evident (as long as you're thinking about blueberries). It actually works quite nicely.

The appearance is pitch black with a tan head that disappeared quickly.
The aroma is a nice mix of chocolate, blueberry, and maybe a little coffee.
The taste is big chocolate, tart blueberry and roasted coffee bitterness.
The palate is full with a lingering sweetness and tartness that mingles well. Also a nice malty sweetness that lingers smoothly on the palate.
Overall this a really good imperial oatmeal stout that I would love to try and age. I hope they release the other acts so I can try them too.