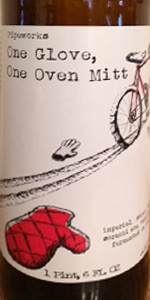 This beer was brewed to pay tribute to all of the trials and tribulations that winter threw at us, Chicagoans. The legend has it that PW brewer who shall not be named (Scott (not that he shall not be named Scott, that is his name. His name is Scott)) lost one of his gloves. As an all-season bike rider, this would not do, so for one week, PW brewer who shall remain anonymous(ish), replaced the missing glove with an oven-mitt. Sometimes odd combinations just have to work, and oddly, they work better than you'd ever guess.

Pitch black with a white had salad taste with some vanilla in the background great smell adding to the complexity of this beverage. Overall very solid and drinkable.

Pitch black brew produced next-to-nothing by way of a head... Brewed with Sorachi Ace hops and vanilla beans, and fermented on oak spirals... Rich, roasty, and malty, but with a cutting edge of hops and the drying tannins of oak... The dark malts produce ample suggestions of bittersweet roastiness and char, all enmeshed in a thick body that expresses the cold, black espresso, molasses, and cocoa you'd expect... But the hops cleave through that with impressions of lemon, lime, cedar, dill, and a generally herbal/earthy aspect... The oak brings things to a close with a nice drying - and at no point is this beer too sweet - leans more toward the bitter, dry, roasted malt end of the imperial stout spectrum... The vanilla is fairly subtle, and most notable toward the finish, almost like just before the beer starts to dry out on your palate, you get a sweet kiss of vanilla bean sweetness... I enjoyed the roasty, herbal, hoppy char - and the mild sweetness - plus I'm a fan of a big body in an imperial stout, and I thought this felt pretty spot-on for my tastes; but I can see a couple of points on which this could be a hit or miss beer for some folks...

"This beer was brewed to pay tribute to all of the trials and tribulations that winter threw at us, Chicagoans." Little did they know this would still be true in mid-April. This one, despite the presence of the vanilla, is very bitter and oaky. Nothing wrong with that, in fact it feels like something that would keep me warm in winter. Both smell and taste are predominately woody and malty, with hints of some of those sorachi ace hops in a fun way. Do I need to have again? Like winter in April, not really.

Notes via stream of consciousness: Well this sounds good: Imperial stout with Sorachi Ace, vanilla, and oak spirals. Let's see how it is. Wow, it's black, like oil. Yeah, completely opaque when held to the light. Short head of very dark tan. Wow, I get the oak in the nose too. I wasn't really expecting that. Some, but not this much. Beyond that I get dark chocolate and roastiness. I thought I smelled some coconut in there as well, I sometimes get that in strong dark beers. Moving on... the flavor is not as intense as I thought it would be given the color. Nor does it have the body I thought it would, it's medium bodied but with a dextrinous side. I thought it would be quite heavy. Not so. Which is good, this is very drinkable. But back to the flavor, while not as intense as I thought it would be it's still very flavorful. The oak comes through, as well as some other woodiness and herbal character that I can only assume is from the Sorachi Ace. I initially thought of dill, although I usually find cedar with Sorachi Ace. And lemon, which cuts through the chocolatey malt, which, by the way, is not as dark or rich as I thought it would be, and with that said, neither is the roastiness. It's actually very refined. I'm not really finding the vanilla though, just a hint here and there, but that's fine, it's in there doing it's job somewhere. I'm really impressed at how kind of light and airy this is given that it's a 9.5% Imperial stout. I guess the moderate carbonation and lighter body help with that, but the malts are also not as intense as they could be either, and that seems to be the reals secret. I'm not sure how they do that, but it's awesome. And I also see what they were getting at with the name of the beer and the idea that you just make due with what you've got, which I assume were the Sorachi Ace hops. They work though, it makes it a very unique and interesting beer. And then there's the oak that just finishes everything up in the end. Without really going into it too deeply I think the flavor changes go something like this: oak and chocolate thinned with lemon cream - perhaps that's the vanilla? - cocoa, a hint of roastiness, more sharper lemon, some herbs (dill, cilantro?), and then residual dark cocoa powder, roast, more lemon cream, bitterness, and then drying oak. It doesn't come across as complex when you're drinking it, but there really is a lot going on. Late bitterness. Interesting. I could get used to this. Odd, but very nice. And very nicely done. To pull all of this together without becoming heavy handed in any part of it is pretty impressive. Or was it just completely accidental? (laughs) Probably! Still, it's a great, unusual beer. So what did I miss? Did I cover the moderate carbonation? That leaves it quite smooth and works well with the more limited body. Ahh, I just got some lemon in the aroma. Oh! I forgot the head retention and lacing. Neither were very good. The head dropped quickly and then there was very little lacing left. All I have right now is a splash and a few spots left. OK, I've gone on long enough. You get the idea. Worth trying in my opinion just for the unusual quality it has, but also because it really works in the end.
Review# 5,932

This one did not really do it for me and that's because of the Sorachi Ace hops. I didn't think that hop flavor melded with the rest of the flavors of this beer. I don't mind hoppy stouts and think Closer Encounter is great but this one was just off to me.

Bomber into a snifter. Pours a very dark brown, almost black but not quite. Big, frothy 2 finger mocha-colored head of foamy bubbles on top. Looks beautiful. Nose is a little weak, but what's there is nice: chocolate, syrup, coffee, roasted malt, burnt sugar, and raspberries. Heavy mouthfeel, but not as heavy as it looks in the glass. Creamy and smooth. Bitter chocolate and coffee notes up from with dark fruit on the back end, as well as a hint of mango or pineapple. Very slight but present. The vanilla really comes alive on the aftertaste, and is noted with an enjoyable bitteness. Notes of roasty chocolate hang around for a while.

In my opinion, this beer is very underrated. Imperial Stout is my favorite type of beer, and this one stands right up there with some of the best. I like this almost as much as FBS or Blot Out the Sun, which are probably my two favorite big stouts. I'd be buying this all the time if it were available.

Pours placidly into a tulip glass, with a cascading head of foam the color of chocolate milk. It has lasting surface skim and an unbroken collar of lacing foam.

Aroma is a bit muted, though there's some roasty char and mild hop greenery present. Oaky as it warms up.

Taste is heavy on the char, burnt brownie pan scrapings, ash, graphite. Sorachi compliments this in an interesting way, though the heavy char dominates. Lemony botanicals, dry oak lingers along with the char. Medium bodied and creamy, with a full bodied taste. Overall this was interesting to try, probably something appropriate for sipping in the dead of winter.

A - Dark tan foam settles to a thin cap, thick collar, and a few stray specks of lace. Body is a solid, opaque, black.

S - Lemony Sorachi ace hops, roasted malt, and oak dominate. Vanilla beans mingle with the oak and are a bit more understated, but grow more apparent as the beer warms. No real perceptible alcohol. Odd combination, but it works quite well.

T - The taste is solid, but doesn't quite live up to the aroma. The Sorachi Ace and oak combo leaves this a bit more bitter in the finish. Mid-palate, it's a nice roasty stout with nice vanilla and semisweet chocolate to balance things.

M - Creamy, medium-full body, with pleasant carbonation and a mildly dry, oaky, finish. A hint of lingering stickiness, but this is pretty well-attenuated. Again, not particularly boozy for 9.5%.

D - Other than the fatiguing bitterness, this is a very nice beer. I was a bit skeptical of the concept, but Pipeworks won me over on this one. These guys have been on a roll, and this certainly does nothing to diminish it. Probably best enjoyed fresh to really get the Sorachi Ace character in the nose.

This is a very good beer. I think the Sorachi Ace hops are terrific with the stout base and the oak spirals offer a different kind of oak flavor. Well constructed, balanced, flavorful and a bit different.

One Glove, One Oven Mitt from Pipeworks Brewing Company
Beer rating: 91 out of 100 with 44 ratings