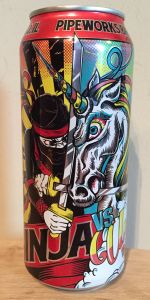 Notes: Ninja vs. Unicorn celebrates the epic battle between two of the biggest hop-heads of lore. Brewed with over five pounds of hops per barrel, this unfiltered double IPA is sure to please the most discerning hop lover. Whether you’re rooting for the mythical horned horse or the deadly assassin of the east, we hope you’ll enjoy Ninja vs. Unicorn.
View: More Beers | Place Reviews
Recent ratings and reviews. | Log in to view more ratings + sorting options.
Ratings by BeerZombies1:

APPEARANCE: I imagine if a ninja’s sword where to chop the head of a Unicorn, he would wipe his blade clean on his ninja pajamas. The color on his ninja costume would be reminiscent of the way this lovely beer poured. A beautiful golden amber, with sparkling highlights that really hypnotize you when you stair into it. Produced a nice big loose white head that lingering cap.

AROMA: Drinking this out in the forest has intensified the pine aromas, all around me the pine cones are falling. Getting tons of sticky pine and huge resinous piney hops coming off the pour. Fresh sliced juicy grapefruit, like the ones on “fruit ninja” game from my iPhone. Followed by some over ripe orange and tangerines. There is a wonderful maltiness that translate into toasted bread and sugar cookies. The nose on this beer is amazing. I imagine this is what a unicorn fart would smell like!

TASTE: After the ninja chopped the head off of this mythical beast, the blood spilled and filled bottle upon bottle of this beer. Usually when a beer has such an outstanding nose the taste doesn’t live up. Not in this case, the flavor layers are all right there in line with the aroma. For a beer that claims 10 ibu it inst a palate wrecker at all, Its actually very easy drinking. The piney hops come flying at you like a ninja star. Super dank that’s followed up with a big bursting citrus flavor. The sweet malts do make an appearance like a piece of toast with a grapefruit/orange marmalade. There is a some heat on this beer, which is odd with the abv coming in at 8.5%.

MOUTHFEEL: Medium body with a moderate carbonation. there is a very pleasant syrupy creaminess that makes this a really smooth drinking ipa. Lots of that resiouness pine comes through on the mouthfeel, really coating the entire mouth. Leaves the mouth with a long lasting lingering finish.

OVERALL: Not sure if Ninja Vs.Unicorn is a the name it should have. Its so balanced that it should be called Ninja Sex Unicorn. Huge fan of every aspect of this beer, including the little heat that comes out i’m assuming from the battle. Speaking of battles I think the real winner was me! I just saw that they are going to start canning this beer, when that happens I will be trading for a case at a time. Truly everything I would want and ask for out of a dipa.

This slapped for no reason, a great blend of some of the juicy citrus flavors with distinct old-school piney elements. I was definitely thoroughly impressed and should have taken this brew more seriously

Around medium carbonation with about the same for the body.
Aroma is a mix of citrus and tropical fruit,malt,some grainy bread.
Taste doesn't stray far from the aroma.
An overall solid really well made beer

I'd drink again for sure if its an option on tap but probably not going to buy again when head hunter is so available and edges it out all around.

Canned on 9/7/21. 16oz can poured into a tulip. Pours golden with nice clarity and transparency; fluffy white head that falls leaving nice retention and sticky lacing. The aromas have some mosaic hops coming through. Some tropical fruit. Some crackers and breads. Malts are there. The flavors follow the nose. More mosaic hop flavors. Some pineapple and grapefruit. Subtle hints of coconut in the mix. Hints of caramel. Some fresh grass in the mix. Soft sweetness. Moderate bitterness. Malts do their thing. Finishes dry. Alcohol goes unnoticed. Mouthfeel is medium to full-bodied with moderate carbonation. It's fluffy, smooth and easy to drink.

This is a solid DIPA. Nice hop flavors. It's simply enjoyable.

Nice hazy color
Pine forest on the nose with some tropical but a grass on the palate.
Overall it’s a great beer

Hazy golden pour with a lot of lacing. Smells of a lot of things at once and in a good balance -- pine, mango, pineapple, cut grass. A medium bitter taste of pine, dry hops, with sweeter pineapple following and a sticky pine resin aftertaste. Medium carbonation.

Personally I'm bigger on the "hazy, juicy" end of the IPAs, but it's nice to have a classic pine bomb once in a while as well. But this isn't really a bomb, it's well balanced and refreshing. Nice art on the can (especially the unicorn) but the concept of ninja vs. unicorn (or pirate, shark, gorilla, Chuck Norris, etc.) is so worn out already.

16 oz can pours a clear golden color with a average off white head of large bubbles, leaves some lacing in my glass. Fresh grapefruit and pine aromas, hoppy citrus and pine flavors. Medium bodied with a soft and creamy mouthfeel, very drinkable for 8% abv

Colorful chrome can art to go with the fantastical name. Another midwest brewery whose products are only recently available in my state. Poured from the 16 oz. can into an English nonick.

a: Nearly clear orange with an inch thick white head which receded slowly to a quarter inch thick surface foam and dense lacing.

t: Follows the nose with a moderate hope bite and dry finish,

o: An excellent west coast style DIPA, flavorful and easy drinking for an 8%.

First thing that stands out is the creamy head. And it lingers. Next is the mouthfeel... it's silky. Nose is very mild. Pours quite pale so the thick head is sort of surprising. Very balanced taste. No attempts to impress you with anything in particular. Just good, solid, balanced taste. Slight bitterness in finish. Nice. I'm usually a NE IPA guy, but this is a really nice West Coast.

Poured from a 16 oz can dated 1/16/21 into the test glass.
A - Really nice clarity, steady carbonation, thin white cap, but fantastic lacing.
S - Pine apple, melon rime, cut grass, Sweet malt, some honey and white pepper
T - Again with a pineapple start, white grape skin, lots of tropical fruit, with a pine thread holing things in check.
M - Big on the palate, semi sweet start then wham, bold bittering hops. A wonderful feel all bold.
O - A great reminder that all IIPA's need not be juicy and cloudy, this is a big IIPA with great feel and flavors

Great mouth feel and taste. For 8% ABV, this is a crusher. So refreshing for an Imperial.

Great to get back to the non-hazy IPA. The beer that turned me on to pipeworks many years ago.