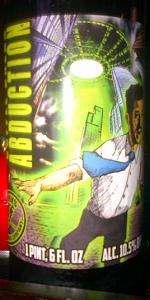 Notes: Think yourself entitled to some brief respite human? Think again! Our coffee version of Abduction Imperial Stout, uses local craft roast coffee from our friends at lpsento and whole vanilla beans, to take your away once more. Which, depending on your penchant for a probing may be just what you need. Beware the skies for this robust, richly flavored Latte Imperial Stout may. just. scoop. you. up...
View: Beers | Place Reviews
Reviews: 117 | Ratings: 925 | Log in to view all ratings and sort
Reviews by StonedTrippin:

i wasnt as in love with this one as i had hoped to be. i didnt realize there was vanilla in it too, and its intense and sweet, and makes this more of an over flavored dessert kind of thing than a coffee beer i want to drink a whole bottle of. disappointed a little, but its on me, and the beer is still great, just very different than what i was expecting from it. thick black beer from the bottle, motor oily textured, with a puffy tan head rising up and staying in place. aroma is sweet chocolate and vanilla, and bitter coffee, almost fully fresh. the vanilla takes over a little, and the depth of the grain base and the intensity of the coffee are both lost to it a little bit. thats true in the flavor too, which this tastes more like brownies than anything else, some bitterness i suppose from the coffee, but its sweet first. vanilla is authentic though, whole beany kind of thing, and tastes really good, i just think it comes at the expense of the dark matter coffee, which i really wanted to taste unimpeded in this beer. the coffee is still there though, and there is some dark roast to the grain that really highlights it. the booze here is also a lot, this would be better in the 8% abv range i think, its hot, and with the sweet vanilla, i find myself awfully glad i am sharing the bottle around a few ways. pipeworks does these flavored beers really well, and i dig this for what its worth, but i was expecting something much different. this has me excited to try some of the other variants they do, the cinnamon could be amazing...

Out of a bottle into my tulip. Picked up in trade from Kevinpitts (Thanks Kevin!)

A – Deep and dark brown on the pour with a finger of milk chocolate lacing that settles down nicely.
S – Roasted malts, coffee, vanilla and cream. Nice.
T – Just a nice roasted malt character out of the gate. Follows up with flavors of dark chocolate, vanilla, espresso, cream and molasses. Touch of trace bitterness that mixes with a cream like sweetness that balance each other nicely. Breathy alcohol at the end.
M – Medium to full bodied. Medium carbonation. Leaves a nice click creamy taste on the palate.
O – So this beer is all in my wheelhouse so I may be bias. I love beer and coffee and this mixes it very well. Nice strong coffee flavor that doesn’t overpower the beer. Even the person who doesn’t dig coffee will find something to like here. Just a fine brew all around. Pick this up if you can. You will not be sorry.

L: black ale body, darkly stout in the snifter, coupla fingers of mocha head left some motes down the glass

T: tasted a little green on the open, but warmed into a smoother drink; the vanilla has a taut edge that cuts into some of what I'd expected to be a mellower coffee; coffee flavors are mild and semisweet, backed by a bittersweet and slightly tight dark malt

F: medium-bodied, modest carbonation - rather smooth, but with a crisp edge of bitter vanilla and coffee char

O: delivers what you'd expect - straightforward Imperial stout supplemented by coffee at work; the vanilla flavors present in different ways over the course of the drink. Very enjoyable.

love the combo of coffee and vanilla beans in dark beers. I like the bitter/sweet balance this combo can bring when pulled off.

S: expecting a big coffee hit here, and really sort of disappoints. not fresh brewed coffee or beans, more like slight earthy funk. Not very fragrant in general. a faint booze whiff at the end is there.

T: nice smack of booze, chocolate, and caramel up front. well balanced. Not much of a vanilla coffee suggestion here. the beer underwhelms despite the initial caramel sweetness.

O: This one is ok or decent, but not one I'd buy again, especially for the format/price. It's slightly better than average or middle of the road. I'd seek out other coffee or vanilla dark beers if I could, there are far better options out there.

Smells and tastes of roasted coffee, caramel, vanilla, espresso, piney hops, brown sugar, cocoa powder, dark chocolate, raisins, dark fruit and sweet sugary notes. The vanilla is too much and takes away from the coffee, which was the main reason I wanted to try this brew (for the coffee). I liked the smooth feel and bitter coffee finish, but the vanilla and overall sweetness took away from the overall experience. For me this was a big letdown because the coffee was just an accent and not the star of the show. It did however hide the ABV quite well.

Smell: Freshly brewed coffee. Vanilla makes a strong appearance. More coffee. A bit of caramel, cocoa, and a very slight touch of citrus hops. And more coffee. This is really all about the coffee, and it's damn good.

Taste: Wow. Intense, rich coffee flavor up front. One of the best pure coffee flavors I've ever experienced in a beer. Definitely vanilla in there along with caramel and some cocoa. Again, this is all about the coffee. And it's flat out incredible.

Overall: Phenomenal. Flat out phenomenal. If you're looking for a coffee stout that will punch you in the mouth with coffee, look no further.