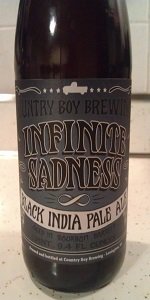 Upon hearing the news of the passing of Bourbon icon, Elmer T. Lee, the fine brewers of Country Boy get straight to work for a beer worthy of commemorating his contributions to the alcohol world. Their results manifests in the ever-assertive Heart of Dankness (Black IPA) that has spent patient time in those iconography Buffalo Trace bourbon barrels.

Just off of opaque, the dark brown ale gleams with tawny brown highlights beyond a modest haze. Light on head character or lace, the ale prefers the more brandy-type legging as its viscosity and alcohol for more sipping and savoring demeanor.

Succulent aromas of undeniable bourbon character waft about the rim of the glass with savory caramel, vanilla and oak. Its incredible bourbon-esque scent bridges well into the base scent of citrus hops, charred toast and burnt toffee. Less of the IPA or toasted character play prominent roles as the bourbon barrel clearly takes hold.

But the taste reveals the base flavors a little more soundly. The early palate takes on equal parts bourbon sweetness and caramel malt, its slow fade into middle palate introduces chocolate, bunt wood, dry molasses and roasted walnuts. Diving into finish, its savory yet robust sweetness allows the hops to fold in giving citrusy grapefruit and pine flavors then trailing with resinous bitterness that still balances pretty well with the sweet booze that lingers.

Full bodied, but not over saturated- the beer has a silky and lightly oily weight due to its light carbonation and its sultry bourbon sweetness. That plethora of flavor seeps into the tongue and delights it with spicy sweetness that lingers deep into finish. Surprisingly after an extended taste, the beer dries out nicely because of the toast and wood spices for a powdery sensation in closure.

I absolutely adore what the Buffalo Trace barrels have done to this ale. It has rounded off the rougher edges of both char and hops while adding a port-like savory sweetness and highlighted the chocolate and nutty character. It makes the beer more of what it really wanted to be- a darker American Strong Ale.

Amazing beer... Touches all of the points I would look for in a beer like this... The barrel is prevalent but not overwhelming.. The hops are prevalent but not too bitter... The time spent in the wood really have this thing singing... It's terrific... I can tell it's a black IPA but the oakey vanilla notes of the barrel cut short any dominance by the lupulus and gives this a finish that's hard to describe... Simple incredible.... I am giving it the 5 simply because, in my opinion, they have done something with the base beer that I didn't think possible.... Both personalities are shining bright without overtaking the other...

Wonderful hearty and robust brown coloring is deep set black in the middle but flows on the edges. The head was tight an thick with significant lacing.

The scent had all the hallmarks of a barrel aged beer. Deep coconut and vanilla tones come out with a robust bourbon and cherry aroma.

The taste is smooth with coconut and vanilla but there's an off shoot of chocolate and caramel malts. Touches of fruit like cherry and prune are deep within a robust and hearty flavor. There's still is room for bourbon, sweet and Oakey, that blends with the diversities and then it ends in a piney hop flavor.

This is simply fantastic, maybe not RX Strength but right up there.

Dark and spicy as it attacks the palate. Looks sexy in the glass. The oak really plays here even after 5 months in the bottle.

On tap at Country Boy Brewpub in KY.
Pitch black with ony a suggestion of brown. Modest tan head is very durable and leaves excellent lacing.

Rare barrel is evident in both the nose and the taste but does not mask numerous other flavors. Sweet aroma, as is the flavor at first, but turns moderately bitter by the finish. Very full body with light carbonation.