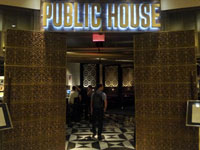 View: Place Reviews
Reviews: 21 | Ratings: 58 | Log in to view all ratings and sort
Reviews by Probins13:

Went here with my wife on a recent trip to Vegas, 12/8/18
We had a table on the outside wall so we could people watch the constant stream of humans. A compromise with the wife who wanted a nice meal and I wanted a big beer list........this place worked for both of us. Was fairly slow while we were there and our server was great. She knew her beer and when she realized we were beer geeks she spent a fair bit of time talking with us. She gave us a free pint of Boulevards BBQ when the bar tender poured the wrong tap, bonus!! I probably didn't need a pint of quad at this point but hey its Vegas get lit!! I had a great burger and my wife had a nice slice of salmon, a little pricey for the plates but not ridiculous. I had a bottle of Victory Java Cask and the misses was drinking a Ommegang Pale Sour and both were solid. The beer list just kept going, and two dozen taps to sift through. I could've spent a fair bit of time here but I was half cut when we showed up and after a 14.3% bottle and a pint of Quad I was getting a little "full". I left with lighter pockets but no regrets, worth a stop for sure...

Visited this place in 2014, very nice selection of brews, but pretty expensive. A nice place had some music playing. The food was pretty good as well.

Located in the middle of restaurant row between the VENETIAN and palazzo is this gem. Great beer list both on tap and in bottles with way too many to count. You need an iPad and 20 min to pick a beer the list is so long.
Food is good and paired well with the beer.
Bartenders are knowledgeable and helpful if the list becomes too much