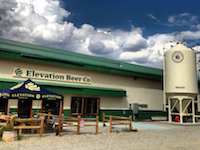 I used to live Salida and came to Elevation often. Most of the beers are very good and the space is great. One of the better breweries in southwest Colorado

Cool place. Fun stop during the trip. Pretty dang good beers as well. Will likely stop by on the way back through the states in a few weeks. Would like to try a few more of their beers.

I have been going to Elevation since Fall 2012, about 5-6 months after they opened.
They have been very successful ....but, with that, things have changed.
It is now so busy on weekend afternoons, year-round, that you can expect to be invisible for a while.
The beer continues to be great, though.
What they're doing right:
- mostly hiring beertenders who know how to treat people properly. (there was only one exception; see below)
- serving beer at the perfect temperature in the perfect glass
- treating regulars like ...regulars
- showcasing some really really good local artists

What they're doing wrong:
- when it's busy, they try to be too chill for their own good. When it's busy, either bring on more staff or cut your
conversations a little short with your friends.
- have too few beers on tap. I'm sure they're experimenting with some stuff. Why not do a special tapping or just
make it available for a short time?
- have a few specials once in a while. For a few hours or an evening or something! I have never seen any kind of
special except for a while they had a small price cut on Mon or Tue(?), IIRC.
- serving a beer from a bottle(!) in a tap room when that beer was on the menu! When I questioned it a little, the guy
got all beer snob on me..."we've found that the bottle version is actually better than .....blah blah blah". I could have
bought a bottle for a lot less than what you're charging for that 2/3 of a bottle.

(Edited: 10 April 2017) They have greatly increased the number of local events and causes they sponsor, so I removed
one of my issues with them.)
But, yes, I still go there regularly and will continue to. It's just that my expectations have been lowered. If you're just
passing through, it's a must-stop. But there are definitely tap rooms that have the whole dynamic wired much better
than Elevation does.

this place is so cool. way out of the way, unless you have a reason to be out there, but the place is sick. set in front of a beautiful mountain backdrop, its a large building with a comparatively small tap room and a patio out back with a tasty food truck. they were packed on a saturday afternoon, almost out the door. space is cool, predictably woody and mountainous inside, with a small window to the large brewery in the back blocked mostly by tee shirts they try to sell. a little shoppy, but the bar is cool, and it was neat to see a few beers ive never had from them pouring. a cask of lavender ipa was pungent but yummy, and they had a clean light wit that they should probably start packaging, really yummy. its also really cool they have so many of their heavy barrel aged beers on at the same time, a lot of breweries here would have release parties and sell tickets to drink beers like oil man and false summit, but they flow freely here. quality through the roof. one guy a little overworked behind the bar took time to say whats up to us, and was quick with the pours. overall a really cool place, seemingly way out in the middle of nowhere, but definitely producing some of the best beer in colorado right now. worth the miles to check it out.

Certainly an off-the-beaten-path brewery but a nice place for a pitstop if passing through the area.

The taproom is somewhat tight but there's a pretty big outdoor space complete with a foodtruck and lots of picnic style seating. Boardgames are a nice addition and I appreciate their dog- and kid-friendliness.

Their were a couple of cask options on, including a mango kolsch (phenomenal), as well as many of their other offerings (Botrange, Fanboy, 8-second, etc.) and they do have an option for flights (a bit pricey though). Bottles to go are available and full price pours are available but also on the higher side.

All in all, this is a cool place to visit and I'd return in the future.

The fiance and I wandered in on our way back to the Front Range after a weekend in the Mountains last week. The brewery was much closer to the main road and easier to get to than I had expected, which is always a plus.

The patio was open despite a slight chill in the air and the doors inside the actual brewery were open giving us a pretty chilly draft. The bartender recognized we were cold right away though and closed the door immediately, making a few others happy as well. She got pretty busy soon after that and was not able to spend too much time talking about the beers we ordered for our flight, but when she brought our five tasters she did explain each one.

The cool thing was that we could pick any five for the same price, regardless of gravity or the price of a full pour. Since the high-grav stuff was what we had not tried before we dove into a False Summit (barrel-aged Quad), Apis IV (Quad) and I'm pretty sure we had a Montanya as well. Sadly, they had just kicked the last of Senorita.

After finishing the flight we each grabbed a full pour - I took a First Cast IPA, the fiance did a Porter. A new bartender stepped in to pour us those and seemed to take some of the pressure off the first one giving them both time to shoot the shit about beer a little more and their friendly insight and service at that point greatly improved the quality of our visit.

They had nine beers on tap and allowed growler fills of the core beers. We ended up heading home with a 4-pack of each of the three core beers and an Apis IV 750. It was a great stop on a long drive home and we'll be back for sure as it's some of the best beer you'll find in the mountains.

I'll be brief as there's nothing really complicated about Elevation Beer Company.
First and foremost, it's located on Poncha Springs/Salida, so it's in a beautiful area. The views alone can be motivation to make the trek.
In terms of the place, there's a normal sized tasting room with a 7-8 seat bar, a few tables, and some booths against the wall.
There are roughly 10 beers available on tap. Those range from their flagships ('Lil Mo, 8 Second, and First Cast), to their seasonals, BA limited editions, and 1-2 taproom only offerings. They also have cask firkins on Friday, which I was lucky enough to try. On that particular day it was a Mosaic dry-hopped First Cast. Want bottles? They have all of their currently available bottles including their limited editions if there are any in season. If you've never had their beers, they're all phenomenal. In fact, of the breweries outside the front range they're among the best you'll find in all of CO.
Hungry? They do have some snacks and small bites, but it isn't a brewpub or anything like that.
They have plenty of souvenirs, though.
I'm a big fan of their beers and am glad I made the trek out.

Cons - their patio has a fence which you cannot see the mountains from most angles (subject to change I am told), they only had 1 beer on tap I couldn't buy in stores (I enjoy seeing what they are playing around with when I visit the taproom)

Overall - I would go again on another trip down south for a 14er, but I hope the fences are lowered and they have more experimental beers on tap. That picture is NOT accurate.