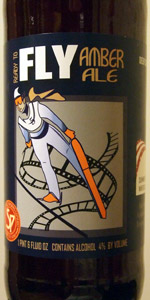 I've been brewing for a couple of years, a couple of batches a month, so I probably only know just enough to make me dangerous to myself. That said, this beer had a lovely coppery red color, as an Amber ale should. I dropped one point off the score for appearance because as soon as I poured it, into a cup I was holding at it at an angle, it immediately exploded into a head that filled 90% of the glass. Needless to say, I was surprised. Nonetheless, we pressed on. I gave a three for smell because I questioned the choice of the aromatic hop that has been used at the end of the boil. Perhaps a nice Centennial, or getting bold and mixing it up with something unusual maybe from New Zealand or Australia, would really help the beer a lot in the aroma department. The taste was quite biscuity, as is the norm for an Amber ale, bespeaking a strong presence of Munich malt. I only gave three and a half points for taste not because it doesn't comply with the standard for Amber ales, which it does, but just because I personally don't like biscuity ales, so I search far and wide for Amber ales / American Reds that aren't biscuity. They're out there. I gave five out of five points for feel because this particular beer absolutely nails it, complying entirely with the standard of how red ales should feel in the mouth. Not much more to say about that. Then I did some quick math and averaged it out to just shy of 4 points, not because I don't want to give a four, but because I think people on this website tend to judge just a little bit on the harsher side so they don't appear too generous, and I don't want to blow the curve.

Smells mildly of caramel a little bit of toasted grain with a slight tea aroma.

Starts out a little sweet with a toasted grain flavor.. Mild bitterness and a flavor of tea. Little bit of scorched sugar flavor.

Overall it isn't offensive but not that great either. A distinctly forgettable beer. Generic Amber Ale.

Pours a clear dark golden color/amber, nice carbonation, tiny head, very slight lacing. The nose is of sweet malts, slight caramel, with some hoppyness. The taste is sweet, malty, with some slight hoppyness. Medium body, with a slight dry/bitter finish. Not a bad brew, but not sure if I will buy again.

Appearance is attractive enough, with the red-amber brew topped with plenty of foam. Mouthfeel is sparkly and thin. There is not much malty flavor or even a dose of caramel. The bitterish long aftertaste is the main flavor. Dull and slightly browned cereal taste with a sourish note. Rather dry with a dirty touch.

This is not much of a beer, even for an amber. It's what gives Utah beers a bad name. From the 22 oz bottle purchased at Emigration Market in Salt Lake City. Price was $3.50.

Wish I could give it better marks but ya I can't