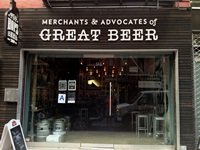 Went to Top Hops our first day on an NYC vacation, and ended up going there total of three time (Including one 2.5 hour session doing crossword puzzles while my wife went to the nearby Tenement Museum). I really, really liked this place.

They have around 16 beers on tap at any given time, and they rotate frequently. Almost all good stuff, including imperial IPAs and imperial porters/stouts; and anything can be put on a flight without an upcharge. I don't know the NYC craft scene well, but i saw many beers at Top Hops that I didn't see anywhere else.

I had different staff each time, and all were congenial and knowledgeable. I was particularly impressed at how they interacted with walk-in traffic that might not be craft-drinkers, and working to figure out what they might want to try, often based on vague clues in response to the what-do-you-like question. Two examples I heard were "Um, wheat I guess" or "I don't know, but I don't like stouts or IPAs". They were able to talk through the beers and put together a flight that might appeal to the individual; and were never the slightest bit condescending regardless of the customer's level of knowledge. It's good to have craft ambassadors like that.

Background music was interesting but not loud or intrusive. Think I recall some Led Zeppelin, and some Beatles. The overall selection and volume made a nice background without being distracting.

Seating is limited, about 16 total seats. The time I was there on a Friday it was basically full by 4:30 or so. But afternoons on weekdays there was anywhere from 0 to 4-5 other folks there, mostly other non-regulars (Including one very nice English couple).

Food is quite limited, so I gave it a "none". They do have free pretzels; and cheese, meats, and olives for sale. Olives were the best bargain at $5, and went surprisingly well with the beer. Cheese plate starts at $15 for three cheeses (and baguette slices).

Didn't have a fridge at the hotel, so I didn't buy any bottles, but I did look them over and salivate. There was an extensive selection of local, US craft, and foreign.

not catching them at prime show. still six good taps. fresh. lots of cans to drink on patio or back at hotel. mixed on service. still best place on walking distance.

Location is off the beaten path but the selection both on tap and in cold case is exceptional. Limited table seating, and bar is capable of seating 20-25 people. Sit a spell and then make a purchase to go ---

On a quiet Tuesday night a couple of beer friends visited. There was a great selection on draught with plenty of options and an extensive list of bottles and cans. One friend from the east cost spoke with the bartender to find a number of really excellent IPAs. While we were discussing things the bar tender mentioned they had just gotten some Focal Banger in; fantastic luck and made for a truly enjoyable setting and evening. Definitely going back whenever I'm in NYC.

Small, dark, but cozy. A few tables, small bar, and coolers full of bottles in the back.

Quality of taps is good. I thought the selection leaned more towards the larger craft breweries, than the smaller ones though. Close to 20 taps, bottle selection was pretty good. The space is small so they can't fit a lot, but the choices were mostly good ones.

Service was quite good. The gentleman running the place (owner?) was friendly, prompt, and helpful. My wife had questions about some of the ciders, and he was eager to help.

All in all, a worthy spot for a beer or some bottles to go.

Just in time for their 5th anniversary today, my review of Top Hops!

I stopped in at Top Hops while waiting for a table up the street at Russ & Daughters. I almost passed right by it as I wasn't expecting a shiny all glass front; and when I stepped inside I found it equally polished. There are some accents to the decor that give it a more natural, comfortable feel though, like the chalkboard "back bar" and wooden shelving where items for sale are displayed (books, glassware, large bottles, etc).

I wish I'd had time for more than 1 beer because there were at least 6 out of their 20 taps that I'd never tried, and a quick review of their current offerings before writing this reveals that to still be the case. As if that weren't enough, there's a full aisle of coolers in the back chock full of cans and bottles that you can purchase to go or to drink there.

They do about 4 events a month, sometimes more, sometimes less, with special kegs, "meet the brewer", and so forth. Beyond those, there's a fairly solid crowd of regulars so it's never empty except for the times you'd expect it to be -Monday at about 1:30 for example... every bar's dead.

If you're in the area you'd be an idiot not to stop by, and I'd say it's almost a no-brainer as a destination as well. now where's my "thumbs up" emoji?

I used to drop in here regularly to shop but I eventually realized it gets picked over quickly by the truck chasers so you're not going to find much of note if you're on the hunt. They do have a great selection of classic beers and so-called shelf turds, so give a glance if you're here.

The tap selection generally underwhelms me as it's either heavy on year-round beers one could find anywhere or far to heavy on AB InBev options.

What a great bar/bottle shop with an awesome selection of brews! The bartenders were busy but saw that we were thirsty! The vibes in this place were great.

Perhaps the best selection of bottles in Manhattan (taps not as impressive). Good service, nice vibe. A pleasant surprise on the LES.

A nice industrial aesthetic, although it leaves the atmosphere feeling a little frigid. And it usually is cold and drafty in there. The staff is a little attitudinal, but knowledgeable as well. Great brews on tap, and an extensive bottle selection in the back. Stop by if you're in the hood.

Just a really cool place to chill out so yeah

This place is a gem!! Having gone out t attend a wedding in Fishkill, my wife and I decided to hang out in Manhattan for a few days before heading Upstate on Saturday. Thursday we went to Stout to meet up with her friend, and were surprised by the information given to us by our server. Now being from the west coast, I was looking for founders, bells, evil twin, mikkeller, 3 floyds, etc. I had already researched Torst, over in Brooklyn. Still on my 'To Do' list, just not fulfilled on this trip. We had our server recommend a few other brew pubs that were closer, it was raining the whole time, the UN General Assembly had the city all kinds of tied up with detours, closures, and just chaos. So the ones that were recommended were Rattle 'N' Hum, Proletariat, The Gingerman, 1 Mile House, and TopsHops. Boy, after reading and reading reviews on Yelp, I made my mind up. TopsHops it was. The main reason we decided to go here is that it sells bottles. You can open em there and share with newly made acquaintances, save em to take back on the plane, or to just drink while you are there in a hotel room. We chose to entertain the ability of all 3! Brilliant. It was also a fortunate decision because Goose Island just had a tap take over the night before. Bourbon County here I come! 2013 BBA, 2014 BBA 2014 Barleywine, and it went on and on. The younger guy that worked there was super knowledgeable and so was the owner. Met a couple of great people that I would love to drink with again. If you are in NYC head directly to the East Village and make this a MUST STOP!!!! You will not be disappointed!!!! We ended up purchasing 10 bottles, and taking 5 of them back to Los Angeles.

Taps were not working when I was there, so it was a bottle only night. Great selection, friendly and knowledgeable staff.

I've been to Top Hops twice now, both times I was extremely impressed with their selection. A bar/bottle shop that has a very solid tap rotation, and you can drink any bottle from the fridges for a $2 on premise "corking" fee. The place also has a good vibe and crowd. Despite the staff being very friendly and helpful, the only flaw is that both times I visited, only two guys were working the bar/mini kitchen in which they serve small plates. It took a really long time to get my order in, and I was sitting at the bar. If they hired another guy to bar-tend during peak hours, it would help a lot. Aside from that, I love this place and will continue to go as often as I can.

Draft selection was a bit underwhelming when I went in yesterday. The bottle selection is great however.