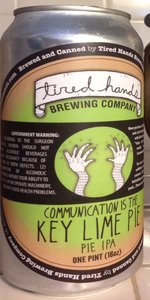 Thanks to rudzud for sharing this interesting concoction.

Overall really interesting. Great key lime pie characters with a nice DIPA blended in, one of the first of these style beers I actually enjoyed.

16 oz can poured into a teku

A- A hazy orange color with a two finger white head.

S- Lime juice and lime zest without being tart, some vanilla and graham crackers, getting citrusy and piney hops too.

T- Limes, lime zest, graham crackers, some vanilla, along with citrus hops up front and piney hops in the finish.

I tried this from the can chilled in a tired hands goblet.

The color is golden with hazed clarity as expected with fluffy white head. The smell is lime right out of the gate with some citrus hops in the aroma that are complimentary and a mild graham cracker type scent. The feel is great -very tangy citrus acidity of lime up front with moderate carbonation and mild bitterness that increases with light malt sweetness to balance with a tangy acidity that continues into the finish.

The taste is great! Love the key lime flavor with its tropical taste that is sort of midway between the sourness of lemon yet plenty of lime tang and zest with hops that are both citrus and tropical and perhaps a little grassy. the malt supports with a slight sweet element of graham cracker with yeast astringency adding to the lime intensity. Overall I loved this as I am a huge fan of Key Lime Pie and they really achieved what they are going for -perhaps almost too good with the lime so in your face at times but this is as good or better than I expected -Kudos Tired Hands!

16 oz. can. Hazy orange body with an ample white head. Smells of orange, lime, graham cracker, and a touch of vanilla. Took some warming for me to get all the adjuncts in the nose. Tastes much more strongly of lime. Cracker malt with some vanilla. Back end has a soapy combination of lime and graham cracker. Light body. Kinda gimmicky. I find myself searching for the key lime pie flavor instead of just enjoying a pale ale. Whether it comes together as a key lime pie flavor is debatable. It drinks pretty well either way.

First had: cask at TH

Rarely do I rate beers higher than 4.5 these days, but sometimes I get one that's just too good. I came back three days in a row to get this one while it was on cask. Call it a novelty if you must, I don't care. This beer was amazing, so shut up and let me drink it.

Hazy golden-yellow pour into an imperial pint glass. A frothy white head sat on top like sea foam, dwindling to a wispy layer but never disappearing; random lacing. The base beer was very good, and I didn't really expect too much from this mutated version. But the aroma...it was pure key lime pie. It really just stopped me in my tracks. Sweet lime puree, graham cracker crust, vanilla whipped cream...it was all there, with the pleasant citrus hop notes ever-present, but taking the back seat for a change. "It couldn't possibly taste as good as it smells," I thought to myself, but it sure did. Now, I had to remind myself that this was, in fact, still a beer. It's not going to taste exactly like a mouthful of key lime pie, because there are other ingredients in there...malts, hops, etc. So, much like the aroma, there were blatant flavors of lime, graham cracker, brown sugar, cinnamon, vanilla, whipped cream, yogurt, overlaid upon a nice zesty pale ale, crisp citrusy hops, biscuity pale malts. There was nothing subtle about this beer. It was a key lime pie in a glass. Medium body, soft carbonation, smooth mouthfeel. More. Need more. Always must to have.

It was recently put on tap (a few weeks after the cask kicked), I guess because it went over so well. I'm definitely going to go back and try it again, with hopes that the regular tap version will retain all the goodness of the cask.

*Edit - Unfortunately, the tap version, was nowhere near as tasty as the cask. Don't get me wrong, it was still a tremendous IPA, but the key lime pie flavors didn't come out nearly as much.