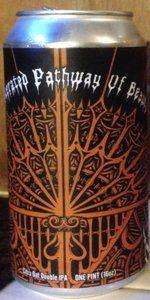 Well, first things first: this one poured more chunky than that one monkey. I’m talking floaties giving birth to floaties here. Yep, this one isn’t even a Monet: even from afar there is no winner in this beers chicken dinner. That being said… Hello Georgia meets Fiji in the damn aroma because it is beautifully potent in like the smoothest of ways (a Benji Molina triple? Yeah, let’s go there). The aroma smashes your tongue like how we all wish the astroid did in “Armageddon” - waboom the aroma is good. On top of that is super a juicy taste (almost too much for my liking), but it plays things delicately enough (like Jackie Robinson leading off of third base), that’s it’s all good and super safe (even if Yoga Berra says it isn’t).

One of Tired Hands best offerings!
So solid, belongs in the same conversation as another TH.

Poured from a 16 oz can dated 8/24/2020 into a Willi Becher pint glass.
L - Pours a hazy orange color with a fluffy head that dissipates slowly, leaving lots of lacing on the glass.
S - Smells of citrus.
T - Tastes of oranges and grapefruit with some bitterness on the finish.
F - Medium body and carbonation with a creamy body.
O - Very citrusy New England IPA.

Living reflection from a dream. Not quite that good, but I did start humming Zeppelin. A strong milky smooth sip of tangerine. Pours a light orange haze with a moderate head. The nose is all sweet citrus and the taste follows with a little sticky icky. The oats pull the citra in and give it an smoothly sweet tangerine feel.

If i were measuring a summer's day, I would have to say, that this style overall is past its zenith for me. Like Jimmy Page, I can no longer be faithful, but I can't help thinking how it used to be. Does she still remember times like these? To think of us again? And I do

On tap at Arts and Crafts Beer Parlour, NYC.
Pours a hazy yellow color with a moderate and quickly dissipating head. Looks on par for a NEIPA.
As expected, the aroma provides a burst of juicy fruit. Aromas of mango, guava, melon, tangerine and grapefruit, along with notes of dank.
Juicy for sure, however, the taste was not as sweet as expected. Muted notes of tropical and citrus fruit as reflected in the aroma. Fruity hops flavors well supported by creamy oats and neutral malts. Despite opening with no bitterness, there is a delayed spicy and grassy bitterness that slowly develops in the finish, along with a touch of alcohol.
Medium bodied with a frothy, creamy and ultra soft mouthfeel. The gentle carbonation supports the smoothness of the mouthfeel, on par for the style.
This one grew on me and had textbook attributes of the NEIPA. It was good, albeit not as phenomenal, for me, as these scores would indicate.

Nose: A complete tropical fruit smoothie aroma. Lots of sweet pineapple, mango, guava, melon, kiwi, lemon meringue, tangerine, and a touch of strawberries and cream. I definitely get that core Citra aroma, but there's some serious tropical flare that would make one think there's also another hop varietal in here. Very pleasant aroma.

Palate: Immediately, the first thing you'll notice, is that this is a very sweet beer. I've had a few that have been sweeter, but not many, and not by much. Just shy of dessert level sweetness. It isn't a syrupy honey sweetness, or a tacky, grainy sweetness. It's super oaty, and oat tends to lend a much cleaner, neutral sweetness, as seen here. Once the palate recovers from that initial bolt of sweetness, the hops surface, in one of the fruitiest, most tropical flavour profiles I've ever seen. The bitterness is lacking 100%. I think think an ounce of hops saw the kettle with this one. It's certainly super "hoppy", in the sense that it tastes like a smoothie, but it isn't your traditional hopping method. Flavours of pineapple, mango, guava, lychee, melon, gummy peach rings, coconut, key lime pie, lemon cream, and just a tiny whisper of fresh grassiness work together to turn this into a total tropical fruit bomb. The yeast used in this is also a Tired Hands dead giveaway. They have some pretty expressive yeast strains that are very identifiable, and this is no exception. The finish is relatively fleeting, with a substantial drop in sweetness, a tiny bit of grassy dryness, and a faint hint of vanilla, then ultimately ending on a dry, slightly chalky oat note, with just the ghost of a suggestion of dry tropical hop flavours lingering.

Mouthfeel/Body: Like many other Tired Hands hoppy beers, this one has a serious body and feel. The large dose of oats lend a seriously fluffy feel. Once more, it isn't syrupy and viscous, or super chewy and dense - the beer is fluffy. There's no denying the beer had weight and heft, at nearly 9% ABV, and it certainly shows, but the predominant factor of the beer's fluffy, pillowy body is that sodt oat. Effervescence is fine for an 8.6% beer, and in fact, has a little more prickle than I initially expected, which is nice for a beer of this size, as ir provides a little bit of weight. Ultimately, the beer is pretty wet, with just a hint of grassy dryness into the finish.

Overall: To be entirely honest, this is the second time I have had this beer, the first being several days ago. The first time, I was a little disappointed, because I found it to be far too sweet - and the beer IS sweet, there's absolutely no denying that, however, this time around, I find it much more pleasant and enjoyable. A perfect example of why you should try beers more than once. Your tastebuds are constantly changing, depending on what you've eaten, what you've had to drink, your mood, and even the time of day.
It's a very new-age IPA. No boil-hop character or bitterness, predominantly oat-based grist, creamy, and quite sweet. However, there is a very particular crowd of beer enthusiasts who chase this stuff like nothing else. The big fluffy, creamy juice bombs and fruity hop smoothies. If you enjoy thosw types of IPAs, then I could see this earning a respectable score. Not to mention, everything about this beer, from the malt base, the hops, the yeast, etc...just screams Tired Hands, so they certainly nailed that part.

O: An elite DIPA. Well worth snagging if you can find it.

16oz. can served in a Spiegelau tulip. Canned 05/10/2019 - Blissful printed on the base of the can. Pours a dull tangerine hue with a hazy clarity and a loose, half inch, bright white head that quickly dissipates towards the shoulders leaving a consistent slick and a thick, concentric band of foam around the edges. Nose is a bit difficult to pin down. Definitely the ubiquitous citrus; however, there's also something else in the foreground that's difficult to pin down - earthy and slightly medicinal but something as as well. Taste reveals a kiss of candied citrus, some melon and earthy/herbal notes in the background. Mouthfeel is light-medium in body with a soft texture and an even, consistent carbonation that leaves a little prickle on the tongue between quaffs. All and all, a solid example of the style.

This beer pours out a medium shade of orange and forms over two fingers worth of very tightly packed, egg shell white crown. It leaves behind heavy lacing as the bubbles slowly recede.

The nose brings a punch of tropical and citrus notes. Orange, slight pineapple, mango. Some dankness.

The taste comes in the same way. There’s some dankness along with some slightly ripe fruit and fresh squeezed oranges. Really balanced and not over done. +.25 for balance.

The mouthfeel is creamy and thick, definitely full bodied but smooth and goes down easy.

Overall, this is a really well made beer. Balanced without sacrificing the qualities and prominence of flavors.

On tap at Haymaker, NYC, it pours cloudy gold color with a 2 finger thick foamy off white head that faded slowly and left really nice foamy lacing with rings as it went down the glass. Smells very tropical with grapefruit, tangerine, pineapple and fresh squeezed orange juice. Some malty notes on the back end, but this nose is mostly fresh smelling citrus hops. Flavor is just as dank and juicy, with grapefruit, tangerine, orange peel, pineapple, guava, fresh squeezed orange juice, faint caramel, biscuit, mild piney hops, fresh citrus fruit and candied sugar. Juicy and easy drinking, this went down fast and easy and I had several in my session this evening, it was a very tasty brew. the second glass I had was even better than the first!

16oz can courtesy of CanConPhilly. Shitty review follows, as I'm tired as hell after getting home from a drive back from a visit to.the hometown.

Easy drinking, creamy IIPA, sorta reminds me of a Dixie Cup that was somehow made with tremendous restraint.

Creamy mouthfeel, presumably from the oats.

Delicious. I'd drink this all night but tonight I'd probably wind up leaving one sitting out to spoil if I had more than one can, as I'm nodding off. Thanks, Matt!

3 plus month old can. Age didn’t do it justice but still good. More malt on the palate than I would like.