5 Out Of 5
Tired Hands Brewing Company 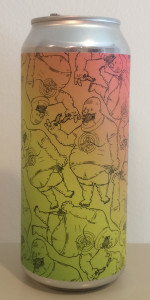 First had: on tap at TH

Served in an 8oz. wine glass, 5Oo5 was a dark brown-black liquid, with a creamy cap of tan head, with lines of chocolate brown penciled in; this receded to a wisp, leaving a few dots of lacing on the glass.

For all that went into this beer, the aroma was pretty muted, all roast: dark malts, light notes of peanuts and a little coffee.

The taste was pretty much dominated by a rough phenolic flavor, quite medicinal, with a solventy, malt-liquor-like booziness maybe from the maple syrup addition (I had the same thing happen with one of my homebrews, so I'm guessing that's what it was, not certain though); beyond that, there were lesser notes of raw chocolate, burnt marshmallow (detected mostly in the flavoring of the head, which was neat), sugary sweetness, really nothing in the department of peanut butter or vanilla, with very little coffee coming through; more cacao emerged as the beer warmed, but more solvent emerged as well. Mouthfeel was about medium, quite thin for a stout, but about the norm for a Tired Hands stout. Would be nice on nitro, I'd imagine.

So I went back a few days later to try this again. "Maybe it was a bad pour?" I thought to myself. "Tap lines not fully flushed when switched over perhaps?" But honestly, I got the same exact off-flavors, and nothing else had changed. Hmm. I just don't know. Either 1.) there's legit something wrong with this beer, 2.) I just don't like the beer, or 3.) I don't have a taste for beers made with junk food thrown in! (Wasn't a fan of Snack Attack either, so go figure). I tried.

End of story: if there is 1 out of 100 Tired Hands beers I don't care for, I guess this is that one.

Thick dark brown pour with a bubbly, cola looking much colored head that settles quickly. Aroma is very dessert-like; chocolate-peanut butter, notes of coffee and vanilla as well. Flavor is big and sweet, with the chocolate, peanut butter and notes of marshmallow all coming through. Such a hodge-podge of flavors it is hard to pull each ingredient, but it is sure dessert like. Feel is not too thick, very slick, medium-low carb. Surprisingly well done overall, with this one not being too much of a sugar bomb.