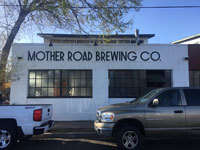 4.21/5  rDev +0.5%
vibe: 4.5 | quality: 4.25 | service: 4.25 | selection: 4
My wife and I visited Mother Road a few days ago while spending some time in Flagstaff. They had about 10 beers of their own on tap, plus a couple guest beers. I had a flight and the Tower Station IPA was a real standout, though the brown ale (and its coffee variant) were very well executed. The taproom is a cool industrial space with the brewing equipment right out on the floor. There’s also a big patio and a generally convivial atmosphere. Service up at the bar was fast and friendly; they are a great modern place and I think my favorite stop in Flagstaff.
May 06, 2021

4.1/5  rDev -2.1%
vibe: 4.25 | quality: 4 | service: 4.5 | selection: 3.75
Cool little industrial building a few blocks from the center of town. Entry is through the patio area which has about a dozen picnic tables. Lively last afternoon dog-friendly crowd. Taproom has U-shaped bar and a few more table. They sell single 16oz cans from their walk-in cooler. As I was on a hit-and-run mission I never checked the tap list... Friendly, efficient bartenders made the in-and-out less than 5 minutes. Hope to stop back there when I have more time, the place looked interesting.
Apr 15, 2021
Rated: 4.08 by bumchilly25 from Canada (BC)

Reviewed by Kolb from Montana

4.6/5  rDev +9.8%
vibe: 4.75 | quality: 4.5 | service: 4.75 | selection: 4.5
The highlight of this place is the outdoor patio. It was a beautiful late March night and the vibe was superb. Lots of people on a Friday night and inside was cramped so we were happy to find a picnic table outside. You’re able to order the full menu from Pizzicleta, which changes everything, because the pizza spot next door is way too small. We had three divine pizzas and their homemade gelato. I had a pint of the New England IPA called Helton, and it was pretty good. Paired well with the cheese board and pizza. They also have canned wine which is pretty awesome. Especially bc it’s one of my favorite Pinot Noir from Underwood. Of all the breweries in Flagstaff, this seems to be the best combination of everything you want in a brewpub.
Apr 01, 2018
Rated: 4.5 by ahazabinadi from California

Rated by JonathanKersten from Arizona

Reviewed by htomsirveaux from Texas

3.89/5  rDev -7.2%
vibe: 3.75 | quality: 3.75 | service: 4.25 | selection: 3.75
Nice vibes here, a great place to visit with my puppy! Very friendly atmosphere, greater service, just wish there was more space! I'd also love to see a full draft list from Mother Road in the future. Although their guest drafts are very tasty! A couple appearances from Lumberyard and The Shop Beer Co. when I visited.
Apr 15, 2017
Rated: 4 by Spreetaper from New York

Reviewed by sunsjammer from Arizona

4.32/5  rDev +3.1%
vibe: 4.25 | quality: 4.25 | service: 4.25 | selection: 4.5
My wife and I stopped in early afternoon on a Thursday in October. Located in an older section of Flagstaff. It was not very busy until a tour group showed up. Ordered a Tower Station from the bar inside the brewhouse and took it outside to the beer garden. Enjoyed the cool fall weather and the beer very much. Very laid back vibe. Highly recommended.
Oct 31, 2016

Reviewed by Noelito76 from New York

4.47/5  rDev +6.7%
vibe: 5 | quality: 4 | service: 5 | selection: 4.25
I had no plans to go here during my three day stay in Flagstaff but having tried their flagship Tower Station IPA the night before I figured visiting the brewery would be pretty good. It was.

The brewery, only a few blocks from my hotel, is dog friendly. Big thumbs up for me anytime we can bring Lulu someplace. Had a couple of their newer beers which I'll add eventually and they had a number of quality offerings, always a plus. The vibe and the service were really good. One of the staff even gave Lulu a special treat, sealed the deal for me. I would certainly return, maybe as soon as tomorrow.

3.68/5  rDev -12.2%
vibe: 3.75 | quality: 3.75 | service: 3.75 | selection: 3.5
Pretty chill place in the old area of town just south of the railroad. Scrubby patio area. Dog friendly. Free pretzels for the palate scrub. I like that. Service was good. Barkeep tried to tell me that it's better that she puts the beers in order of what they think I should try. I had to gently insist to put them in the order that I had them on their profile sheet. (I was ordering for 2 people with different taste preferences-Plus I think I know enough about what order I would try them.) She seemed mildly put off by my breach of protocol. Beers ranged from interesting, Sour Station, to quite good, Gold Road Kolsch and Tower Station IPA.
Jul 29, 2016

Reviewed by cambabeer from New York

4.64/5  rDev +10.7%
vibe: 4.5 | quality: 4.5 | service: 5 | selection: 4.5
Visited every brewery in Flagstaff and this was by far the best. Great patio vibe with live music and lots of people interacting with each other over beer. Excellent quality with my favorite beers I had in Flagstaff. Some of the best service at any place like this; an employee carried over chairs for us without us even asking when looking for a seat on the patio. He also gave us some free Mother Road decals. Selection of great beers, not a single one disappointed. I was a stranger passing through Flagstaff but really felt at home here.
Jul 02, 2016
Rated: 4.25 by hockeypuck from Maine

Reviewed by azdback from Arizona

Reviewed by Serina615 from California

4.7/5  rDev +12.2%
vibe: 4.25 | quality: 5 | service: 4.5 | selection: 4.75
This brewery was highly recommended by both locals and out of state friends who had already been. My husband and I shared a flight of all of the beers on tap (seven as of this review) and we both thoroughly enjoyed the complexity and variety. We then chatted up the bartender, who offered us a taste of a "Model T", a mix of their Gold Road and Model T Stout (which isn't on Beer Advocate, apparently), and a variation of that same drink called a "Triple T", which was a mix of the Gold Road and their Third Anniversary Ale (which is an imperial stout). Both were fantastic and made for a great second drink when neither my husband or I could decide what we really wanted after the flight.

The space itself is small, but cozy. It was crowded when we arrived, making getting a beer a little difficult, but that is unavoidable with the small space and single tap of each beer available at the bar. It was definitely well worth the wait. The seating area around the bar is separated from the brewing equipment only by a small divider, upon which a sign reading "Don't Feed The Brewers" is hung. There's outdoor seating available for better weather, which I would definitely enjoy if I was able to make it back again.

All of the beer was reasonably priced, with the beer mixtures being priced at the same rate as their "regular" beer counterparts.

Overall, this place was great. The atmosphere was cozy, the beer delicious, and the staff friendly. I definitely recommend this place to anyone who visits Flagstaff.

Reviewed by Chastise from California

4.58/5  rDev +9.3%
vibe: 4.5 | quality: 4.75 | service: 4.5 | selection: 4.5
This was the last brewery I visited in Flagstaff during a 2-day exploration of the town. This was absolutely the best of the breweries I visited. I split a flight of all 7 beers on tap and was thoroughly impressed. Compared to the other breweries visited, each of Mother Road's beers was a step up in complexity and quality. With Tool playing quietly in the background, the atmosphere was casual and a bit nostalgic. The bartender was knowledgable and fun to chat with, as were the other patrons. He even had a few beerXbeer mixture suggestions, which were delicious and are worth asking about after you've tried the basics.

Bottom line: There are many good breweries to visit in Flagstaff, but do not skip Mother Road.

4.25/5  rDev +1.4%
I did a whirlwind brewery tour of Flagstaff, hitting three of the four located along the railyard and Route 66 and Mother Road, which I arrived at last, stole the show. I wish I'd stopped here first. I wouldn't have needed to even bother with the other two.

There were only 4 or 5 beers on tap and I didn't want to order another flight, so I went with my go-to beer choices, the special/seasonal brews. One was an anniversary Belgian ale and the other a porter/winter ale. After tasting both, I immediately was impressed by how much more complex, full-bodied, and artfully made these two were than the other offerings I'd had in town. The flavors were more explosive and the beers much more robust.

It was a tough choice to decide which of the two beers I'd have a pour of, but I went with the winter warmer, a porter they call Stranded. The beer was dark as night, with a creamy and frothy head, and even on appearance, this beer stood head and shoulders above everything else I'd had in Flagstaff. Taste-wise, dark, roasted malts danced alongside notes of vanilla and wintry spices, making for a beer that was mildly sweet, slightly smoky, and warming. I could slowly sip this Stranded brew for the rest of the summer. Fortunately, bombers were available for $8-9 so I made away with a few of those.

The brewery itself is small, save the outdoor area that was abandoned on the chilly afternoon I visited. The brew kettles and other equipment sit right next to the small seating area and the brewers were hard at work as customers quaffed the good liquids. Small and intimate and cozy, almost like drinking at home.

The pours were very reasonable at around $5 a piece and for the quality, a steal.

If you're short on time in Flagstaff, but want a great beer, come straight here.