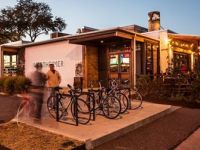 Rated by Ben7773 from Texas

Reviewed by bullywee from Colorado

4.38/5  rDev -4.8%
vibe: 4 | quality: 4.5 | service: 4 | selection: 5 | food: 3.75
Stopped in for a quick early dinner on a weekday shortly after opening, chatted with the bartender and was promptly seated outside. The tap selection was the best I've seen in Houston and it included multiple very nice cask offerings. The bottle list was really good, some really nice vintages and nice surprises all at fair prices. I enjoyed two Lone Pint IPAs, yellow Rose on cask DH with Mosiac and 667 IPA both at great temps ant very tasty! Myself and my 9 y/o I son split the burger and fries, my wife had the tacos all well priced and tasty. I hope to return
and enjoy a couple of vintage bottles.
E

Reviewed by BillyVig02 from Illinois

Bartender was unfortunately rude and didn't know anything about beer. Was snarky at my request, quizzed me on my knowledge, and then told me Pseudo Sue was a sour....

Go for the food, but know what beer you want ahead of time and spare the conversation with the condescending bartender.

This place is putting a lot of effort into building and maintaining a very large beer list. It reminds me of Bier Markt in Cleveland, with a very large amount of taps devoted to European, especially Belgian, beers. They just have an absolutely massive tap list and a beautiful wall of taps to make any beer lover excited. If you've been in the game a while, and you're also from Texas, you might not find a whole lot of new or cutting edge hyped beers on tap, but there is plenty to love regardless.

Atmosphere is sort of a mix between modern hipster + beer geek/gamer basement with some pinball machines and a cheesily large projection screen + rustic farmhouse. It's a little bit confusing but a lot of the woody/bricky farmhouse feel is where it wins for me. The place can get quite packed and you're better off walking up to the bar and getting the stellar bartender service than waiting for an overworked server.

And what a beer list - I counted 70+taps with another half dozen on cask - from brewers far and wide. Of course from being out of town, I wanted to have as many for the Texas standouts - Karbach, Live Oak, St. Arnold, Jester King and 512, among others. The staff is extremely knowledgeable and beer-centric as well as friendly and accommodating. The kitchen has an eclectic range of fare - BBQ, Texas Chili, Salmon and wraps with varying ingredients - something for everybody.

They've been around for 3 years and upon my visit of a weekday afternoon, there were a cast of the regulars there which would include me if I lived in Houston.

Reviewed by supie12 from Texas

Rated by amalahow from Illinois

4.75/5  rDev +3.3%
vibe: 5 | quality: 4.75 | service: 4.75 | selection: 4.75 | food: 4.5
Visited this place when I was on business last month. A really fun atmosphere, with a good diverse crowd. The beer selection is phenomenal, heavy with local Texas offerings, but also with many great beers from California and the East Coast. Really friendly staff that will help you find you're looking for. The food was good but not great. We will definitely visit this place again.
Apr 26, 2015
Rated: 4.4 by Afroman from Arizona

Rated by HopsAholic79 from California

Reviewed by rwf08 from Texas