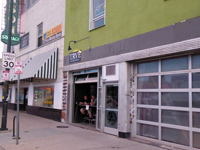 Reviewed by hoppytobehere from District of Columbia

VERY loud at times. Service is usually great and the place doesn't fill up that often.

Glad I live within walking distance.

4.36/5  rDev +4.6%
vibe: 4.5 | quality: 4.5 | service: 4 | selection: 4.5
Vibe here is very interesting. The whole place is focused on metal music, with metal themed decor, metal band t-shirt merch on all employees, and metal music playing throughout the sound system. Music is at a firm enough volume to sit back and listen, but also quiet enough to carry on a conversation. Keep in mind, the space is rather slim, making for a cozy stop. A kitchen in the back was serving Nashville-style hot chicken during my visit, which made for an easy food order on premise. Staff is kind enough. Selection spans a wide array of styles with a slight preference to IPAs. Happy with the visit and would certainly return.
Jul 07, 2022
Rated: 4.36 by REVZEB from Illinois

4.62/5  rDev +10.8%
vibe: 4.25 | quality: 4.75 | service: 4.5 | selection: 4.75
I really enjoyed going here even on a Monday night. I am the stereotypical demographic as I am a metalhead before anything. Chances are you already know the beer is quality so I'll use the space to promote the new food company inside the place, I HIGHLY recommend Music City Hot Chicken. The Nashville hot is great with TRVE beers and the hottest sauce they have is its own experience.

5/5  rDev +19.9%
vibe: 5 | quality: 5 | service: 5 | selection: 5
V-If you're into metal music, you will love this place. It's dark, atmospheric and surprisingly welcoming.
Q- Some of the best beers I've ever had with a wide variety of beers.
S-Incredibly welcoming and nice service. Helpful and engaged.
S-Again, some of the best beer I've ever had with a wide variety. My wife isn't a huge beer fan and she found plenty of beers to enjoy.

4.4/5  rDev +5.5%
vibe: 4.25 | quality: 4.5 | service: 4.25 | selection: 4.5
Winding down in Denver town, this our second to last day of play. Crippling breakfast, check, and now we’re off to, hey, where are we going exactly? What’s ‘Tra-ve’?’ Oh, you mean the sour beer metal place? Are you stupid? It’s pronounced ‘True’, dude (awkward silence in the car as we laugh at a certain someone). Navigated in and then Davo, who is champion, jumped back in the car to relocate when the talls turned away. TRVE. It’s guarded by no less than three men on scooters, we don’t acknowledge them, and enter…

Rated by LSDIIS from Missouri

Rated by Mr_Bryce_yo from Colorado

4.63/5  rDev +11%
vibe: 5 | quality: 4.5 | service: 4.5 | selection: 4.75
TRVE is Denver's heavy metal themed brewery, and one step inside makes that abundently clear. Located in a nondescript little spot on South Broadway, the Necrominon symbol on the front door welcomes you into a dark, dark place. Metal blasts you in the face as your eyes adjust to the darkness. And no, it isn't Poison or Godsmack or Linkin Park; it's called TRVE for a reason. You're gonna hear fast and heavy metal, so posers, take it down the street. The bar is a long slab of dark wood facing what can only be described as an Altar of Beer, surrounded by evil art, skulls and candles. The beer they serve here is excellent, and they are known for their sours, ranging from slightly tart to pure vinegar. They also have a non-sour menu, with the beer totaling almost twenty at any given time. The staff is awesome, friendly without being douchey, knowledgeable without being pretentious. The beer is so good, even people who hate metal flock here, so be prepared to mingle with all types of folks here.