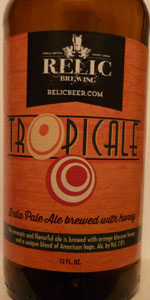 12oz bottle. Pours a cloudy pale yellow color with very little head. Lots of lacing. The aroma is honey and floral hops with some nice tropical fruit notes. Light bready notes. The taste is a good amount of honey and floral hops. Not as much of the tropical fruits as I would have liked but there is some. Some grapefruit and lemon. Bready finish with more of the honey and some orange peel. Lightly carbonated with a light mouthfeel. Mild alcohol presence. Fair amount of bitterness. A bit dank and peppery as it warms. I wish there was a bit more tropical fruit flavor but it's a pretty solid beer. Overall, worth grabbing again.

Tropical indeed.
Aroma full of tropical fruit and citrus flavors.
Taste follows, but with depth. Great mouthfeel to round this beauty out.
Really enjoyed it out of the bottle.

Bottle shared by Kelly and Paul, thanks for the opportunity! slightly hazy deep golden color. Rich bready honey maltiness with some faint earthy pine and citrus hos to counter. My favorite IPA of the night.

First beer from this brewery, local so hopefully it's good.

Nose isn't bad, some tropical notes, with grapefruit, little orange juice, a very tangy citric acid like thing, with tangerine notes, I think I get a little phenols, little musty note, and generic tropical fruit, with a hint of a sweet malt.

Taste is decent, starting with a lot more ruby red grapefruit, fresh grapefruit flesh and pith, a little citrus rind, and citric acid as well, tangy like, and a little tangerine and lemon peel even. Mild sweet candy malts, toasted reddish malts, not really sweet though just tastes like it should be. then the hops take a turn for the worse, they turn earthy and spicy, herbal almost, not really pine sap thankfully, but a big spicy rind and earthy notes, chewy hops as well, and a huge bitterness, Finish is dry with an astringent bitterness overpowering everything else that used to be there. Mild grapefruit lingering as well.

Mouth is med bod, touch creamy, decent carb that seems to get a little overly effervescent.

Overall mixed, malts are OK but nothing special, hops started nice on the flavor but went too far and became astringent and super bitter without much nice flavor anymore. Nose was pretty light overall. Not sure what they were trying to do, like mixing a new world style IPA with the grapefruit and citrus, with old world style bitter spicy hop, and it came out somewhere in between but not good enough for either style really.

One of the more aptly-named beers that I've come across. I'll be honest here - after finishing this one, I couldn't believe it was a DIPA. It's one of the lightest, most inconspicuous beers brewed in this style. Very light with excellent undertones of both orange and honey - without overdoing it on either ingredient. Despite trying this in April, I think it would serve as an outstanding summertime beer.

Anyone looking for a solid, slightly fruity IPA that doesn't go overboard with the citrus, then Tropicale is for you.

Had at Plan B Burger Bar in Fairfield yesterday. Poured a lovely cloudy straw color with hints of gold. Aroma is pretty light and fruity. Taste is nice too. Not a lot of malts and the hops aren't out of control. Good blend here, giving off some nice pineapple notes and citrus. Not piney or bitter. Finishes a bit too sticky but the body is lighter than expected.