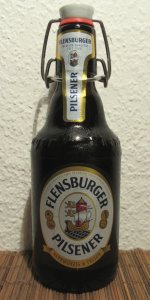 S: apple and pear with hints of dough.

T: Sweet fruits. Loads of apple with a hint of pear. Light yeasty bread, with a touch of honey.

D: Not good not bad, somewhere in between.

Appearance: very clear with a pale straw colour. The head is white, frothy and moderately large. It may not last long but when it fades it leaves a good lacing.
Aroma: nice hoppy nose with some citrus.
Taste: confirms the nose. A little bit malty.
Mouthfeel: dry, good carbonation, low alcoholic strength (4.8% ABV), light body.
Finish: short and slightly bitter aftertaste with some metallic hints.

Overall: Brisk, refreshing and quenching beer. Nothing great about it but nothing bad either.

Has a nice clear golden color with a big creamy head that dissapates quickly. Has a bready aroma with some nice noble hop aroma to balance. Taste is nice and clean and crips as a pils should be with a nice hop bite at the end that I personally apriciate. The mouthfeel again is very crisp as would be expected from a lager, with some tingling from the residual bitterness. A very drinkable beer, very refreshing, a nice summer beer.

soupyman10 from District of Columbia

Pours a clear straw yellow with a soapy white head that recedes quickly to a bubbly ring and leaves no lacing.

The aroma is very sweet, mostly with light roasted malts and hints of other grains.

The taste had a quick initial sweetness from the pale malts, but then an overwhelming skunky bitterness takes over and leaves a pretty unpleasant taste in the mouth through the finish.

The mouthfeel is light to medium bodied with less carbonation that I was expecting.

This is an average pilsener that isn't too offensive but doesn't offer much to differentiate itself from other beers of the style.

Had after the Jessica at Cooper incident.... A good beer... Loads of honey and light malt in the nose, a very delicious smell....Light Honey colour...Some lacing but low for a pils... An enjoyable beer but maybe needs a bit more body to be a great pilsner!

Pop-top bottle. #2 bier review in Germany. The "plop" the website advertises is heard as soon as the cap is popped, nice acitve carbonation in the bottle.
Poured into a Pils Glas, extremly light pale color, light straw, head is really the calling card in the appearence. Light, fluffy even so-light-tan color head, leaving delicate lacing. As the head eventually settels, light bubbles slowly rising through the glass.
Smells like a solid German Pils. Light malts, the high mineral content in the water definatley adds a disctinct note of bitterness. The light hoppiness provides the lightest not of citrus, the ends abruptly with a bite of bitter hop spiciness.
Taste is pleasantly more complex than anticipated. Toasted malt nuttiness upfront, some sweetness akin to light fruitiness, the finish is clean and the light nuttiness is left lingering on the palate. After several sips, a bit of spiciness is left in your throat, that definatly makes another sip follow quickly.
Drinkability is good, sip after sip is light, refreshing, nothing out of the box, just a good standard German Pils. Here in Germany, i miss my Victory Prima Pils, but this is good. German beer is a study in standards, and achieving maximum flavor from the malt profile, with a heavy reliance on hops as a bittering agent. I would pair this with maybe a delicate shrimp/seafood dish, vorspeisen with breads, maybe even a nutty-flavored humms spread would complemet the nutty malt flavor.

Poured a very anemic looking gold with plentiful bubbles along the sides of the glass and an almost creamy looking one finger head which retained well. Minimal lacing. Other than the head, not a very appealing looking start.

Smelled almost a little skunked at first, but later the hops made their presence known.Kind of weak, not an impressive smelling beer.

Somewhat better tasting than smell. The first sip had almost that skunky taste, however the following sips seemed to improve with each try. Some maltiness in there, and even a bit of citrus.

Mouthfeel was decent, if a bit thin. Nice carbonation to tickle the tongue.

Overall this was a somewhat drinkable beer. Not anywhere near the best Pils I've ever had, but not the worst either. Worth a try if you see it, but after one you'll probably want to move onto something more memorable.

pour is golden and clear and looks as it should. the head dissipates quickly leaving very little lace. nose is somewhat mild hay grassy and a bit of malt apple. palate has a nice bitter refreshing grass but not much malt to substantiate that quality. i have had more well balanced pilsners.

12oz bottle. Pours a clear straw color with a fluffy white head that sticks well. Smells of grainy pilsner malts and grassy noble hops. Overall sweet character. Taste is quite the same, though the sweetness is all but gone and the hop presence is much more noticeable, with a decently bitter finish. Medium bodied with somewhat low carbonation.

Flensburger Pilsener poured a very pale gold with a large head and nice lacing. The smell was loaded hops. The taste was super dry, maybe the driest pils I have ever had. Loads of fresh hops. Mouthfeel was nice and the the drinkability was good as well. This was a very nice pils. I enjoyed it a great deal. Very crisp.

Lean and sharp, good for summer. Maybe a bit too full in the mouth for a pils, but a steal at e11 for 6 500ml bottles. Above average.

Smell: Smells like malt. No hop aroma present. Off from style. Could be an older beer.

Taste. Beautiful hop presence with a mild malt flavor. Fits style. This is what I think of hop wise for a pilsener.

Mouthfeel: Carbonation is there but it feels like a medium to thin body as a highly attenuated beer should.

Drinkability: Very good. Would enjoy a few of these at a time. Will buy again.

500ml, swing-top bottle, a pleasant-seeming new Teutonic line of brews now available in Alberta. The brewery name does seem like something off of Futurama, FWIW.

This beer pours a clear, rather pale golden straw colour, with four fingers of puffy, loosely foamy, and yet chunky off-white head, which leaves some deeply layered sudsy lace around the glass as things evenly subside.

It smells of bready, doughy pale malt, white saltine crackers, soft earthy yeast, a bit of pome fruitiness, and gritty leafy, weedy, and grassy hops. The taste is testy grainy and crackery cereal-inflected pale malt, one almost bereft of any sweetness, some still middling yeast, an ethereal sense of yeasty acridity, and the same zesty leafy, herbal, and grassy hops from aroma renown.

The carbonation is quite heady and engaging in its probing and forceful frothiness, the body a so-so middleweight, and sort of smooth, like a sidewalk that doesn't draw blood when you unceremoniously faceplant upon it. Things finish barely off-dry, the grainy pale malt, a late-arriving gasohol astringency, and some sturdy 'n peppy noble hops carrying the day.

Overall, not bad, but hardly among the pantheon of incredibly better renderings of the style from said middle European country - ok, ok, GERRRRRMANNNY! (thank you, Rammstein). Easy to drink, though, if you approach this one in the same vein as one might the Granville Island, Pyramid, or Leinenkugel (and not just because the latter sounds so very German) offerings of our brave new brewing world.

A: Pours a crystal clear pale straw yellow in color with light to moderate amounts of active visible carbonation rising from the bottom of the glass and just a hint of light golden yellow highlights. The beer has a half finger tall foamy white head that reduces to a couple of small patches of thick film surrounded by a thin film covering the entire surface of the beer and a thin ring at the edges of the glass. Moderate amounts of lacing are observed.

M: Slightly less than medium bodied with moderate amounts of carbonation. Light amounts of dryness are present in the finish.

O: I really enjoy the flavors and aromas of this German Pilsener - and it comes in a swing top which is a bonus (I just love that kind of bottle). Very easy to drink and sessionable.

Swing top bottle. Great looking bottle, great looking beer. Expensive but it's a pure pils from head to the final puddle that sits in your glass that you just can't seem to slurp out.

Got this beer and poured into a pilsener glass. Had about an inch of head and a clear, golden color. The smell was almost hard to detect, although the hops came through. It had a sweet taste, almost like bubblegum, but the malt came through. Decently carbonated beer that gives a good bite if that's what you want. The Flensburger's a decent, drinkable pilsener. I'm not overly fond of pils, but this one was surprisingly tasty. Good thing to give a whirl.