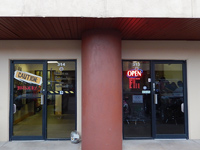 One of my favorite breweries. The East location feels like you are drinking beer in your best friend's garage. The West location is in a great part of Lakewood. It is the showroom for sure. The patio is good sized. It is an easy walk to a lot of food choices.

Stopped by before a pick up at DIA. Closest brewery to airport, 15 mins away.

Tucked away off I-70/225 intersection. Directions on website were very helpful and easy to figure out.

Small tasting room, but clean, bright and airy. A couple seats at bar, then a couple tables. Had Space Invaders video game which was pretty cool.

A bunch of locals there at 2 p.m. on a Saturday. Relaxed atmosphere. My tab came to me on an iPad which was interesting.

Beers were well above average. Flagship Lao Wang Lager was very good. Their Hippity Hops IPA was also very, very good. Was surprised to hear the IPA has Saaz hops in it.

The chinese brown sugar (in the IPA) and secret ingredients (Lao Wang) seemed to add a little extra kick that made the beers a step above whats expected of those beer styles.

Even though Danny and Betty have been brewing under the Caution banner for a few years, the official tasting room just opened in May of 2012.
Caution is essentially off of I70 and Peoria, right where I70 and I225 meet. It's located in a storage area, business park and is actually pretty similarly set up like Strange, Wit's End, and even Avery once were. The people of Stapleton finally have a local brewery, and it's close to Aurora, too...which is a bonus.
There's a standard L-shaped bar with 9-10 seats as well as 6-7 high top tables and room for more as well. His brewing equipment is located in the back, and like most small breweries, taking a look is as simple as asking. There are also a couple TV's that are oddly enough tuned into his brewing software that show his temps, brewing/lagering times, etc. along with social media feeds and Pandora.
Danny and Betty (and their staff) are great folks. Have a question or want to see something? Just ask.
What about the beers? As of now there are taps for Lao Wang Lager (his flagship Asian spiced lager), Honey Matrimony (a honey brown), Wild Blonde (a blonde brewed with wild rice), Toaster Bat (a smoked porter), and Hippety Hops (an IPA brewed with chrysanthemum). Everything is good and unique. They don't taste like anything else around town, and they're all balanced and drink like water. Toaster bat is especially memorable and is one of my new favorite beers in Denver.
Prices are normal, and while their growlers seem pricey at first - they net you discounted pricing for 18 months, a high quality container, and even exclusive beers + a brew day. Not sure if that's something they'll continue, but I think it's a really cool idea so far.
While there's no food, there are plenty of free pretzels and you can order out or have local food delivered.
The atmosphere isn't ground breaking (it's pretty much like most other upstarts) but that's really not a negative either.

Good, unique beers, good people, and a good location. Caution is a welcome addition to the Denver beer community and is definitely a place I'll be going back to pretty regularly. Hopefully as they expand, like Wit's and Strange, they'll be able to add more days.

EDIT: This review was for the old location at the junction of I70 and I225. Caution moved all of their operations over to Lakewood (which sorely needed a place like this) and this is now the Brewability Lab.
I haven't made it over to the new location but the Caution beers I've had since then have continued to be good. Disregard all of the vibe stuff and just make note that the beers are still good.