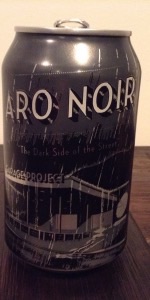 Pours jet black with a lot of head that dissipates quickly. Smells faintly of cough medicine and chocolate. Tastes well roasted, bitter but with a light mouth feel. An easy drinking stout.

Nice black appearance with a small tan head and just the right amount of head. Mild nutty aroma. Taste is also mild nutty for a stout with slight bitterness.

Appearance: It poured a pitch black colour with a big almost three finger dark tan head that stuck around for a while and left nice streaky lacing.

Taste: Starts with a light roast, coffee and light char followed by a bitter espresso and citric finish.

Mouthfeel: Light to medium bodied with medium to high carbonation.

Overall: This was good with nice coffee flavours mixed in with some smoky char and a bitter fruit finish. Light enough to be a stout for all seasons.

From can, Pours dark brown with a tan head. Aroma has notes of roasted malt, chocolate, caramel, citrus hop I know. Taste is medium sweet and light to medium bitter with a long roasted, chocolate, coffee and hop finish.

Appearance - pours dark with almost no head, lacing is almost non existent. Some fix that I imagine will translate to so,e astringency. Aroma - smells fresh, can't really place my finger on the defining smell however it is pleasant to the nose. Taste - as with the smell, struggling to put my finger down here on a taste. Mouthfeel - astringent, not overly so. Overall - not sure if I have been put of it for some time but really found it hard to pin down this one down. I do like the drink, however prefer more malty flavoured stouts.

Bottle: a 100mL taster from the cellar door at Garage Project during Auckland Beer Week.

Appearance: pours out jet black with a good off-white head that drops to a thick half-finger. Looks like a decent stout.

Aroma: a heavy blend of some roast malts with a touch of molasses and possibly some fruits? Nice if a bit unusual.

Taste: the fruits appear to be citrus, which is an odd taste alongside the molasses and roast malts. Not bad, but not brilliant.

Aftertaste: the odd citrus disappears, to be replaced with predominantly a malt bitterness.

Mouth feel: moderate in feel with a lower to moderate carbonation.

Overall: another interesting beer from Garage Project - this time though I think I will probably skip it. It's decent and unusual, but not the greatest I have had. Also it is expensive in Australia - the best I found it for was AU$19 for a 650mL bottle.

Aro Noir from Garage Project
Beer rating: 87 out of 100 with 16 ratings