Day Of The Dead
Garage Project 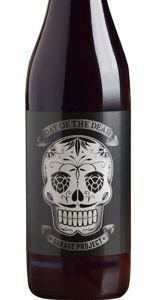 One of the worst beers I've ever tasted. It was like they threw a bunch of chilli's in a mediocre stout. There was virtually no other taste but heat and chilli's and just ruined the palate for the rest of the night. I had high hopes and was extremely disappointed. I'm all for experimenting with beers but this was an epic fail.

Poured into a Fremont small snifter. Pours a very dark mahogany brown with a thin light khaki head that dissipates to patches. Aroma of dark chocolate malt with mild char, cocoa and a little chile burn. Flavor follows with dark toasted malt, a little smokiness, light cocoa and chili. Finishes with slightly sweet cocoa, dark malt and residula chili. Medium bodied with light carbonation. The base beer is very close to a schwarzbier profile with the charred malt and chocolate flavors. The chili is really quite mild and this should probably be listed as a schwarzbier rather than a chili beer. Although the flavor is somewhat muted, it is well balanced and true to the style. This seems to get less love than it may deserve here, perhaps due to expectations for a stout or strong chili forward ale. While I often enjoy strong chili flavors, I appreciate a beer with the chilis in balance with the other flavors. I liked this one.

Garage Project, more like “Expensive Project” due to how much they charge for their brews, amirite? Nevertheless, on more than one occasion I have been roused to muster my wallet (which generally contains various moths alongside my well-worn debit card) to purchase yet another Expensive Project beer based on the ingredients listed on the label. They know this. That is why they can get away with being so pricey - because as a craft drinker I’m drawn towards a brew that has chipotle, agave syrup and cacao nibs like a macro drinker is drawn to flavourless beers and flannel shirts.

Poured from a 330ml can into a Duvel tulip.

A: Impressive petroleum black body with a nice half centimetre beige head that sticks around for a while. At 6.7% ABV that’s a reasonably solid head, and for a Schwartzbier this is one of the blackest I’ve seen, so kudos GP. 9/10.

S: Smoky chipotle chilli, dark chocolate and an earthy coffee bean note round out an aroma that is OK but could have a bit more kick to it. However I’ve often found myself with brews that have a great bold aroma but muted flavours, and vice-versa so you never can tell sometimes. 6/10.

T: Toasty-tasty-roasty bonanza right here! Begins smoky with a light chilli touch that helps intensify the dark chocolate/earthy coffee bean characters, then follows through to a spicy bittersweet finish. Agave syrup gives the chocolate notes a kick so that the lingering aftertaste is a sweet (and spicy) chocolate. Flavour reminds me a little of Stone Xocoveza (though obviously not nearly as audacious as that amazing beverage - think of this as Xocoveza Lite). 8/10.

M: Mouthfeel, although in line with what a Schwartzbier should be, is mid to light bodied and slightly fizzy. More body would be ideal, but they did go with a lighter Lager style, so yeah, different strokes. 6/10.

D: This is one of the better GP beers I’ve had, up there with Death From Above and Cherry Bomb in terms of sort of grasping at what the bottle/can label says without fully realising its goal. That’s the bit that always disappoints me with GP beers - I want to have a party in my mouth with the ingredients they describe but it usually comes across half-hearted. This is exactly why out of NZ brewers my list goes: 8-Wired, Yeastie Boys and Tuatara (then maybe GP or Epic). 8/10.

Food match: Not quite a dessert beer here, more of a “let’s char-grill a steak to perfection” kind of beer.

A 330ml can with a best before date of 24th September 2016 and poured into a Mikkeller pint glass.

Appearance: It poured a dark dark brown colour with a just over one finger tanned head that dissipated fairly quickly but settles to an extremely thin layer and left only sparse lacing.

Not that interesting... The chili makes it a little different but not really better!

looked good, smelled interesting, but the chile had a bit of kick to it

Appearance: pours a transluscent dark-brown with chunky carbonation across the profile. The head disappears virtually immediately. Looks more like a soda.

Taste: pretty awkward - I can taste a chilli fug with rich chocolate and some coffee. I actually found this one quite hard to drink.

Aftertaste: again a sharp chilli with chocolate and malt bitterness.

Mouth feel: moderate in feel with a sharp carbonation that makes the chilli bite quite hard.

Overall: definitely not one of the better beers I have had from Garage Project. The chilli, chocolate and coffee comes through as being quite awkward, and was quite hard to throw down. Add to that the best price I could find was AU$20 for a 650mL bottle, and I won't be trying this one again.