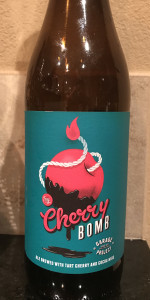 hot diggity this is a good one, a "dessert porter" as they call it, with cherries and cocoa nibs, hauled out to a gathering we had, thanks man for bringing it, you know who you are. this is cool beer, its lighter in body than most of them, and without the alcohol warmth thats usually there. while the cherry is light here, its just a tangy jammy burst for a second, the beer overall is awesome, and its a great combination of ingredients. the cocoa is nicely featured, full of bitterness, dusty richness, and earthy roast, all at the same time. slight vanilla note here, licorice even with the depth of the grain, and then the splashy cherry moment too. what i think will go unnoticed by most in this beer, which is solid but otherwise kind of too familiar, is the yeast. its obvious this isnt american or english ale straight up, its something else, and it seems new to me, and almost impacts this beer more like a dry irish ale strain, bready and starchy and unintentional flavorful despite the fact that it is. this is different than that, but the same in those ways, and its really the aspect of this beer that i end up liking the most, nice of course with the cocoa, but cool on its own too. not too much body or residual sugar. i am intrigued by these guys, and looking to source more of their beers. we had fun with this one...

I’m looking forward to this one: Garage Project Cherry Bomb. I love cherries. I love Imperial Porters (aka Imperial Stouts). Seems like a match made in a really pleasant, well-lit and very clean place [I don’t believe in heaven so this is the closest analogy I could find]. I do quite like the old Garage Project boys, however I often wonder if they have a rampant cocaine addiction given the price of their beers - this 650ml bottle retails at around $24 here - I mean come-on guys: I know you need to get money for blow somehow but this is getting ridiculous. If it wasn’t for their beers being so good I wouldn’t keep finding myself funding their next expedition to Colombia, but I guess they do know how to brew.

Poured from a 650ml bottle into a Duvel tulip.

A: Presents an indeterminably deep black/brown body with a nice gooey tan half centimetre head that I’m surprised sticks around so well given the 9% ABV of this brew [the higher the ABV past 6% the less chance you’ll get a head]. 9/10.

S: Not really detecting cherry in the aroma - unless we’re talking coffee cherries (i.e. coffee in its unroasted ripe fruit form) there’s plenty of that going on. Along with hints of cacao nibs and dark bakers chocolate. A few swirls later and a sour cherry note comes to the fore, mmmm... It’s difficult to tell how sweet this is from the aroma, which is predominantly sour. 7/10.

T: Quite good... interesting, not quite what I was expecting. Begins with a sweet/sour cacao nib character before hitting a dirty/earthy coffee bitterness, (oddly!) some cinnamon spice, hints of sour cherry with a slight coffee cherry bitterness in the finish. Aftertaste lingers on with an earthy note and some warming alcohol. The cherry characters do disappear somewhat due to the overpowering cacao nibs. Still it is quite tasty. I like it. I like it a lot. 8/10.

M: Medium bodied with near zero carbonation (although the carbonation that exists is really dense) which is surprising given the head formation noted above. 7/10.

D: Tasty? Check! Expensive? Check! That seems to be the Garage Project way I guess. I hope by now those guys have a gold-plated Learjet that they fly around in “making it rain” with $50 bills because a) They charge a lot for their brews, and b) They deserve it - they taste [from their beers] like a cool set of chaps (and/or dames). TL;DR Should taste like a cherry-ripe but doesn’t, but it’s still good nonetheless. 8/10.

A 650ml bottle with a best before date of 15th April 2016 and poured into a Moonzen teku glass.

Appearance: It poured a dark dark brown colour with a one finger tanned head that did not stick around too long but left some sparse spotty lacing.

Aroma: Strong dark chocolate with some tart cherry. Coffee is also there but in the background.

Taste: Bittersweet chocolate at the start but the finish is tart sourish cherry with hints of vanilla.

Overall: Normally I’d say that chocolate and cherry goes well together. However in this case, it didn’t quite mix together too well. I’m thinking something like sweet milk chocolate would go better with cherry than the bitterness of dark chocolate. Having said that, it’s not bad, and its much more drinkable than the 9% would suggest.

Cherry Bomb from Garage Project
Beer rating: 89 out of 100 with 12 ratings