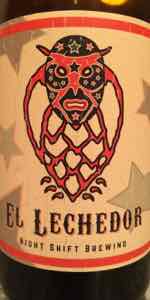 Poured from a 25.4 oz bottle into a tulip glass.

Pours a deep, dark brown color with a finger of effervescent tan head. The head hangs around for a bit, leaving a few splotches of lacing before settling into a golden ring.

The aroma comes exactly as advertised: Loads of bourbon, vanilla, and cinnamon followed by a wave of milk chocolate and chili peppers. There's also some cherry cola and a tinge of hops. Very sweet without a ton of balance.

The flavor brings a lot of vanilla, like, a fuckton. There's some milk chocolate and booze before a subtle wave of cinnamon and peppers. Finishes like a flat cherry cola. Not great.

The feel is medium-light bodied with very soft carbonation. A bit flat and thin for the style. Alcohol is present and assertive.

Overall, not a terrible beer, but definitely a huge disappointment. It's very, very sweet, bordering on cloying. The Poblano peppers are barely noticeable, even as the beer warms. I can see how people would enjoy this, but it just isn't for me.

Pour is a very dark brown hue with a hint of red held in the light. Off white colored head that fades to a ring. Moderate lacing. Aroma is more cinnamon foward to me, hints of watered down poblano pepper with a little vanilla. Taste follows the nose, with a little more nutmeg present. Still getting cinnamon, but the pepper heat disappears. Was hoping it would come as it warms, but none is detected in the taste. A somewhat sweet creamy malt backbone with a littl vanilla. Mouthfeel is quite thin, nothing too palate coating or complex. Still a good beer, but wish I tasted more apple brandy barrel.

Look : On point with a head with a harsh pour. Stays around longer than you'd think.

Smell: My favorite part, amazing smell. Really get all the flavors in the nose.

Taste likes its smells. Lots of flavors that seem to really meld well together

Feel- one knock is the mouthfeel, just super thin.

Overall - Great beer, really glad i traded for this. worth the wait.

Had this side by side with my black parade and this is weak. What a let down. I couldn't even drink a few ounces.

Nothing works here. All the flavors are off. Thin. No barrels.