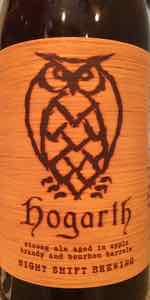 Reviewed by PA-Michigander from Pennsylvania

This pours with a super active and overbearing head, with a light brown body, and lots of lacing.

This smells pretty awful honestly. It smells like rotting garbage and movie theater butter, with a hint of apple brandy.

The smell was atrocious, and luckily the taste wasn't as bad. It's still super shaky, though. There is diacetyl galore, so buttery, with a some slight caramel, apple brandy, and light tartness. This went wrong in so many ways.

The mouthfeel is creamy, in a kind of oily way. This is hard to drink due to the taste and aroma.

I am quite disappointed as to how infected this was.

Mose is sweet brown sugar, citrus, tree sap and green raisins. A light booziness wafts in and out of the experience. A little strange but not bad.

Opens oak, caramel, brown sugar and citrus fruit. Yeasty in the middle with a light oaky tartness that fades into a prominent molasses and syrup sweetness. Ends sweet and sappy. The flavor combination in this one is all over the place.

Medium bodied with moderate carbonation. Prickly and lively in the mouth and aggressive and almost sparkling going down. Accented finish with a slightly lingering, sparkling aftertaste. Not bad but doesn't really fit the style.

I'm not sure what is trying to be accomplished here. Hogarth isn't bad but it doesn't taste like a strong ale... more like a very very old barrel aged IPA that has lost all hop presence and taken on a huge malt character. I'll pass next time.

4.09/5  rDev +11.1%
look: 3.75 | smell: 4 | taste: 4.25 | feel: 4 | overall: 4
Bottle gushes slightly upon opening, pours a muddy brown with hints of amber. Slight hint of light comes through the body, with a thick, foamy, sticky tan head. Aroma is Apple, rye, oak, toast and hints of caramel. Flavor is sweet and woody up front, with lots of toasted malts and hints of rye towards the end. Body is full, rich, with a lingering sweetness and medium carbonation. Overall a pretty good beer with a nice barrel component.
Nov 21, 2015
Rated: 3.99 by costanzo_mike from Massachusetts

Reviewed by angrybabboon from Massachusetts

A: Medium amber, with some serious ruby tones, lightly hazy but some clarity - medium sized, fluffy head, fades to a wispy cap, leaves some sheets and blobs of lacing

S: An interesting blend of malts, barrels, and Night Shift's yeast - cooked malts, caramelized malts, and some light spice from the rye, but not much - biscuits and some toffee - sweetness and some earthy character - woody, with some bourbon and some sweet liqueur, brandy - lightly spicy overall - some booze

T: Sweet malts with some sprinkles of booze - sweet, chewy malt base - cooked grains, caramelized malts, cooked biscuits, toast, caramel, molasses, sugar - light spicness - lightly fruity, with some hints of fig, plum - woody with bourbon, and some brandy - finishes with more sweetness, more booze - would be a mess, but it's light enough that it's not syrupy

This drinks like a fairly standard strong ale that has spent some time chilling in barrels. The bourbon is light enough that it does not become overpowering, and the apple brandy is a nice touch. Ultimately, it's too sweet, but it could have been much, much worse if it were a high ABV syrup bomb.

Reviewed by Goblinmunkey7 from Massachusetts

Smell: Hints of vanilla, caramel, coconut, and butterscotch. A sweet boozy character runs through as well thanks to the apple brandy barrels. Deeply cooked and caramelized malts. Caramel and pushes of toffee and deeper sugars jump out. Big push of raisin, some fig, and a general almost dark cherry. Worn leather and a slight undercurrent of almost tart. Sour cherry skin. A touch of cocoa powder. A little nutty. Negligible hop presence. Maybe a hint of something leafy and earthy. Slightly damp with some stone. Green apple skin.

Taste: Nutty oak. Some moderate bourbon barrel influence throws a touch of heat with toffee and butterscotch. A light touch of vanilla. Apple brandy barrel adds a little sweetness coupled with a bright sweet alcohol. Malts base is sweet. Lots of caramel and toffee with a bready undertone. Slightly earthy. Mild alcohol spice buried in the back that creeps out as it warms. Solid rye spiciness builds with each sip and helps round the initial sip. Flavor flashes with a ton of complexity but quickly fades to a generalized apple skin sweetness, oak barrel, and tart cherry. A touch of coconut. Lots of butterscotch as it warms.

Mouthfeel: Medium slightly slick body with a moderate to high carbonation. A touch of astringency and a slight prickling carbonation. Relatively dry.

It's an amalgam that never quite hits its stride. The complexity is there it just doesn't persist and leaves everything just a little underwhelming in the long run. The barrel blend is on point.

Reviewed by ChrisP802 from Vermont

Rated by nick35712 from Massachusetts