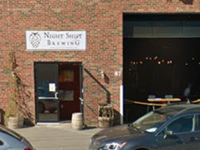 An excellent brewery near Boston - They have a great selection of beer, more stouts than anything, which I love. I will definitely be back!

My personal favorite brewery, got to watch them grow as I have lived around the area for years. Very signature branding that is recognizable. Great distribution list and can be found in plenty of stores around the area. Wonderful community and very inviting. Service is always spectacular.

Went to the new Lovejoy Wharf location and was impressed. The layout is very cool and VERY different from their original Everett location. The food wasn't "destination" worthy on its own but it was perfectly good to accompany a beer-centric experience and reasonably priced for the area.

Beers are all $8 or $9 for full 16 oz. pours unless they were high ABV, and for a buck more you can get a 20 ounce pour. Sadly that's a pretty damn good price for Boston drinking. Best of all was that they have a ton of beers unique to that location - probably half the menu. Percentage wise it's a hoppy menu, but they have so many beers that there are still plenty of other options. They had a Vienna, a Pilsner, a couple farmhouse, 3 weisse's, a rye porter, and even a Dark Mild (which made me very happy) and an English Barley Wine.

Don't take my specific descriptors too seriously here as there was a lot going on. The short story is that everything was at least very good except the Pilsner.

NE DIPA: very good but they had a couple of them and I don't remember which one this was.

West Coast IPA: it wasn't labeled as such but that's basically what it was. The name had 'dank' in it and it was indeed that. Nice bitterness and older school look/body. Really good and a nice change of pace.

English Barley Wine: Excellent! Rich and raisiny and true to its name as it was not overly hoppy in the least.

NE Pale Ale: this was called 'Fuzzy Situation' and it may have knocked Whirpool off its pedestal as my wife's favorite beer of theirs. It's only a little boozier (5%) but it has a thicker body and citrusy rather than peachy flavor. Fantastic.

German Pilsner: this was the only clunker. It was only 3.5% ABV and basically tasted the way you might fear a pilsner that low would taste. Had kind of a harsh lemony hoppiness to it that had no richness or maltiness to back it up.

The patio isn't open yet but they said it should be within a couple weeks. Bar was packed when we got there at 6:00 and by 7:00 the dining areas were packed too. Great experience all around. They're going to make a mint here :slight_smile:

Setup right along the wharf, although with not much in way of a 'view' aside from overlooking the Police marina. The restaurant/store setup is quite unique, with a large, typical restaurant style to the left, and a small cafe for to-go coffee and to-go beer on the right. Inside is well lit, with large windows for natural lighting. The cafe feels intimate with a very typical cafe design for these days (white floors/walls, small pops of color). To-go beers are available in 4 packs, but are allowed to be broken up into singles or any combination. No comment on wait staff, as we just bought beer to-go. Selection was good, while spanning several IPAs, they also had a few lager varieties in addition to a couple stouts, including a barrel aged version, meaning consumers could pull for a variety of tastes.

Great place - slightly understaffed for a Friday. Friendly but also fairly loud. Still a place I will come back to whenever I can!

Nice bright space friendly staff it was hot as blazes the day I was here but there was a good amount of inside seating. I have been told it is quite crowded on Saturdays but can't say for certain.