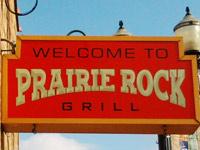 View: Place Reviews
Reviews: 1 | Ratings: 4 | Log in to view all ratings and sort
Reviews by rossracing:

Currently in soft opening mode, and planning a grand opening event on April 10th thats invite only through facebook.

Located in downtown Elgin, where it feels like it should be a bustling area, but in fact pretty deserted on Saturday afternoon.

There were 10 taps, and plans for 16 more after the grand opening. The interior is brick with concrete floors, with a corregated metal awning above the bar and a cow skull that lended a southwestern touch. There were a few old breweriana signs on the wall, an old Praeger beer metal sign, an antique liquor salesman document by the front door. At the bar there were pairs of flatscreens all around, with a spread out dining area by the windows. It had a spartan industrial feel. The kitchen was somewhat open behind the bar.

Double Jack, Lagunitas IPA and Fixed Gear were the highlights, oddly there were 2 Grieskirchner taps and a Windy City Wheat :( The only local beers in bottles were Cane & Ebel and "Metropolatin Krankshaff" [sic]. List was random with a few good beers, but overall left something to be desired. Hopefully when they expand the menu will improve also.

Service was quick and friendly, no beer expert on hand, but they were able to tell us about the space and the history of the old brewery there. Hopefully this place breathes some life into downtown Elgin, otherwise it was pretty dead.