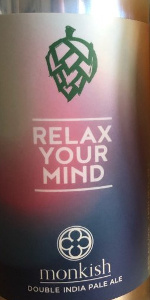 Pours a massively murky, dull orange with two fingers of fluffy, pouffy, dirty-white head. Retention is excellent, leaving fat wads of lacing hanging off the sides of the glass.

Taste is reminiscent of some kind of cocktail made with fruit juice blend and vodka, not in a bad way, mind you, just that's what it reminds me of. So, mango, orange and pineapple, grapefruit peel, white wine and vanilla, low bitterness but spicy, ripe and composty, with a bit of hot booze.

Feel is thick and decidedly juicy, medium-hefty bodied with good carbonation. Some boozy warmth in the gullet.

L - first Monkish outside of a collab. Let's see what's what. Pours a thick, milky, pineapple juice haze. Has a warm glow to it. Thin, crackly white head that dissipates quickly.

T - huge burst of scallion and toasted orange peel. Surprisingly bright for these kinds of flavors, and exhibits a menthol cooling sensation which is probably just pure ethanol evaporating off my tongue. Pineapple creamsicle up front that develops into wintry pine, grapefruit spiciness, and warming grape as it starts to really open up. Vast, expansive flavor. Tastes like Asian purple grape candy in that it's sweet, but delicately restrained and "fresh" to elicit sip after sip. Throat-numbing bitterness to close it all out.

F - low carb with a thick, chewy body. Lots of lupulin residue and kind of a suffocating chalkiness. Am I having an allergic reaction?

O - color me impressed. The zest was at first a little one-dimensional, but this beer offers much more complexity the further we delve in. Lots of side quest flavors that leave every sip a new experience.

Tropical, citrus, not getting really any impeding hoppiness or booziness. Really nice.

A bit drier than the best Monkish has to offer, but still an above average NE IPA.

L - Dark yellow milkshake with a finger of white head

F - Creamy. Big body that never slows you down. No alcohol. Perfect carbonation.

O - Incredible DIPA. Monkish is doing New England IPAs just as good as the East Coast (if not better).

Tangerine-like citrus, pineapple, passionfruit, earthy hops, and a nice backdrop of white wine-y grapes form the initial impression on the nose. The more tropical and citrus-like elements fade from memory like the sunset hanging from the edge of Huntington Beach cruising down Highway 1 away from LBC, and you're left with the fruity, grape, earthy hop notes hot boxing the black '94 Honda Civic DX, since there's really nothing else you can do while facing the inevitable horrors of LA traffic.
⠀⠀⠀⠀⠀⠀⠀
Business as usual on the palatal end as well. Huge notes of passionfruit and pineapple lead the charge, accentuated by the same fruity white wine characters from the nose. There's also a nice soothing pine and earthy hops character toward the back, joined by a similar dry-ish pale malt light cracker flavor which actually feels a little more substantial than it did with Intelligent Embellishment. Unlike with the nose, the tropical characters do linger for quite a bit and haunt you later on in the form of hoppy burps. #firstworldproblems.
⠀⠀⠀⠀⠀⠀⠀
Medium-bodied, but drinking this right after IE makes it feel so thick and chewy. Mouthfeel could be a little creamier, but it's substantial enough to make you want to to bump G Funk all day while yelling "Regulatorrrrrz" at the top of your lungs. Medium carbonation.

A: Beer comes in a murky yellow-gold with about a half-finger of fluffy white head that dissipates rather quickly. It's extremely turbid, perhaps the thickest looking Monkish beer I've had yet. Big alcohol legs and rings of lacing on the glass.

S: TONS of passionfruit and pineapple up front with a subtler underlying earthy grape. The Galaxy is definitely dominant here, but the Nelson shines through in a very complementary supporting role. As it warms, I get a bit of sweet bubblegum yeasty/malty character, which nicely softens out the powerful hop aromas. Super impressed with how much the hops are coming through on this even after a few weeks.

T: Follows the nose pretty closely, but perhaps even more Galaxy-forward. Again, I get a ton of passionfruit up front along with some spicy pineapple, mango, and tangerine. There's a bit of grass and onion underneath, but again, I think that's more of the Galaxy than the Nelson. On the backend, I get some of the white wine acidity that I associate with Nelson along with a bit of pine and some syrupy sweetness, which is not unexpected given the ABV. In fact, the sweetness actually complements the finishing Nelson notes quite well.

M: Medium-plus weight on the tongue with medium-plus carbonation and medium bitterness. There's definitely a sweetness to the aftertaste, but nothing overwhelming or unpleasant. The feel isn't as creamy as similar DIPAs from Tree House, but it has a certain effervescence that nicely complements the 'spicy fruit' Galaxy flavor profile. Could be a bit softer on the tongue, but again, the higher-than-average carbonation actually works here with the flavor notes.

O: Monkish kills it yet again. This one actually reminds me quite a bit of Space Diamonds from Other Half, but it's a bit more delicate and complex (likely due to the use of Nelson and Simcoe (SD was Galaxy only)) and less sweet/boozy on the finish. It really packs a punch in terms of aroma and flavor, delivering an all-out assault of passionfruit, pineapple, and citrus fruits to both the nose and the mouth. It's a big beer, and the ABV comes through ever so slightly on the finish with a lingering, slightly syrupy sweetness and a medium bitterness that sits on the tongue. Overall, it's a fantastic DIPA that showcases the best of Galaxy. Wish that the Nelson was just a bit more evident, but regardless, this is one of the best I've had from Monkish!

Relax Your Mind from Monkish Brewing Co.
Beer rating: 94 out of 100 with 47 ratings