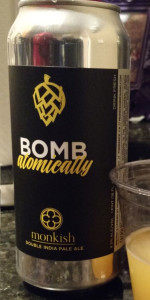 Notes: We took our previous Atomically recipe and DOUBLED the Mosaic, Galaxy, and Citra hops to bring you this new double dry hopped DIPA!
View: Beers | Place Reviews
Reviews: 13 | Ratings: 89 | Log in to view all ratings and sort

Sweet tropical hoppy, orange-tangerine citrus, and an earthy/grassy dank nose on this one! Taste follows with a well-balanced, orange citrus and earthy hoppy bitter finish...as it warms, the earthiness comes out a bit more, but not overpowering. This is really good stuff!

Extremely cloudy pour, decent head, nice retention, and solid lace. Aromas of pineapple, orange juice, lemon sorbet, a bit of grass, and sweet onions. Taste follows with an abundance of pineapple crack that coats the tongue piece in a soothing manner. Medium carb, and velvety feel. This is a great beer. If you can get your hands on it, you won't be disappointed.

From tasting notes 07/15/19
Had on-tap at Monkish Brewing in Torrance, CA

Appearance - Served up in a snifter, opaque and the color of OJ, thin, broken head covering the surface. Fair lacing, with some broken lines and spotting.

Taste - Juicy orange, white grapefruit, pineapple, less melon mid-taste and a bit of mango and guava toward the end. Zingy, juicy finish in the aftertaste.

Overall - Damn. So fucking good. Maybe my favorite Monkish to date. Space Cookie was great, but this is pure juice, and it's probably the best hazy I've ever had.

L - Creamy, hazy golden/yellow with a large white head that sticks around and leaves behind a ton of lacing.
S - tons of pineapple and tropical notes along with some earthy pine and spice
T - Tons of pineapple and tropical citrus notes - grapefruit as well as some earthy floral notes and spices and fresh hop bitterness.
F - medium to full bodied with a moderate amount of carbonation. Smooth, creamy, juicy.
O - another solid NEIPA from Monkish with huge tropical hop notes.

MUY RICA! Bought 4 cans of this beer on my way down to Mexico, one exploded in my tote bag while I was in a bar in San Diego, the second one I had in Bahia de Los Angeles facing the mountains, and last one in La Paz, after getting tired of Margaritas... It was my travel buddy, ups and downs but really memorable ... much love

Juice like pour. Turbid bright straw yellow with a thick fluffy white head on medium pour. Nose is mellow and subdued. Tropical fruit notes with a touch of floral and earthy malt. Minimal on the latter tho. Taste of mangos and melon. Slight citrus and grass. A bit abrasive on the finish but I dig it. Smooth creamy body with a full thick mouthfeel. It’s good.

Sweet hell, my children, get this one and get it good.

Exceptional beer offering by them. Hazy, someone muted smell/flavor, but extremely smooth and tasty. It's not the overwhelmingly dry/bitter/dank IPA you're used to on the West Coast, it's somewhere in the middle between east and west, but reminds you it's an east coast IPA. Great work.

The nose is wonderful. Sweet, fruity, tropical. Mango, pineapple, and citrus all ring true. Hints of malt and booze round it out.

Nice balance of flavors. Present bitter hops, pineapple, orange peel, and grapefruit. I like the hop presence with the juicy fruit as an afterthought, something not often associated with these Monkish juice bombs.

16 oz. can. Hazy orange. Smells very tropical, tangerine, kinda sweet, and a bit of alcohol. Tastes of orange, mango, sweet malts, very low bitterness. Medium heavy. Good DIPA. I was pretty impressed at first, but it ended up being a little too sweet for me.

Fruity & sweet but balanced; flavor country. I hope to have another soon...

Really hazy yellow color with off-white head. Aroma is really herbal and grassy with an intense green hop note. Taste starts sweet and juicy, really fruity and tropical. Light bitterness on the finish. Medium to full bodied, quite crisp carbonation. Overall it's a great example of a NE IPA, really hoppy and juicy.

A: Beer comes in a very light gold almost straw yellow color with about a finger of bright white head made of tiny, fluffy bubbles. Full haze on this one--barely an inkling of light makes it through the center of the pour.

S: Verrry Mosaic- and Citra-forward on the nose. I get tons of blueberry, orange, and a bunch of the earthy, musty dankness that comes through on some Citra-hopped beers. It's a little sweaty onion-y, perhaps even a touch garlic-y. Galaxy is also there, providing subtler notes of pineapple and a hint of that wonderful 'orange creamsicle' thing.

T: Follows the nose pretty damn closely... Huge blueberry note from the Mosaic up front, along with some intense notes of mango, peach, and pineapple. At 6 weeks old, it's insanely hoppy and juicy.. I simply cannot imagine how pungent this was straight off the canning line. About halfway through the taste, that initial overload of fruity hops drops off a cliff, making way for a wave of that dank, earthy Citra flavor that sticks around through the finish, where it's accompanied by a return of pineapple, orange sorbet, blueberry, and just a touch of sweet lemon juice.

M: This one throws you through a loop... Despite the intensity of flavor and the unignorable ABV, this is soft and delicate on the palate. I'd say it's creamy in how it feels as it glides across the mouth, but not necessarily as thick as some of the Tree House doubles. That being said, it's damn near perfect for the style, offering a killer pithy bitterness that just sits on the middle of the tongue LONG after the swallow and relieves it from the overwhelming assault of sweet hop juice.

O: This is a tough one for me to grade. I went into this with absurdly high expectations. Given the hype around this beer (as well as the fact that the OG Atomically was my favorite Monkish beer), I knew this would be amazing... And largely, the beer lived up to my lofty expectations. At six weeks post-canning, this has more flavor than 90% of the week-old IPAs of similar quality I've been drinking recently. Its flavor profile is like a bouquet of tropical fruits mixed with fresh herbs and green tea. And the mouthfeel is pillowy soft, with a perfect carbonation for the delivery of hop flavors without a HINT of alcohol. All that being said, the nose--while explosive--is quite 'green', featuring more of that herbaceous/vegetal Citra thing than I'd prefer. The fruit aromas are there, but they're definitely balanced out by the earthy character. And nothing on the taste really screams '5' for me.. It's really good, but very similar to something like Swish from Bissell Bros, IMO. This is an incredible beer, up there with the best I've had from Monkish. But likely not worth the arm and a leg you had to go through to trade for a can!

Bomb Atomically from Monkish Brewing Co.
Beer rating: 96 out of 100 with 89 ratings