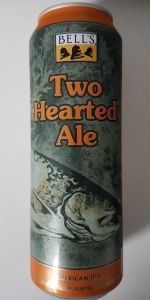 Notes: Brewed with 100% Centennial hops from the Pacific Northwest and named after the Two Hearted River in Michigan’s Upper Peninsula, this IPA is bursting with hop aromas ranging from pine to grapefruit from massive hop additions in both the kettle and the fermenter.

Perfectly balanced with a malt backbone and combined with the signature fruity aromas of Bell's house yeast, this beer is remarkably drinkable and well suited for adventures everywhere.

Yummmm. this is a great IPA. The favors include an initial earthy taste, finished with grapefruit zest. I like this beer very much. I first had it in the Ann Arbor. So glad they sell is locally in MA. Even after 20 minutes, the taste and look remain.

One of the better beers you can have. If you don’t like IPAs still give this a try

L: pours golden/ light amber with a little over a finger of thick rocky foam. Hazy/cloudy

S: citrus and hoppy pine are the strongest notes some malt

T: following the smell I got a light of lemon water taste at colder temps and as it warmed up I got a nice hop bitterness and a good malt body. Overall pine and citrus are the strongest with a nice hint of spice and malt.

F: perfect carbonation, good mouth feel. Definitely not watery but feels a little lighter than other IPAs I’ve had recently

Pours golden with slight amber color and white fluffy cap. Subtle back notes of spice, cinnamon, and grapefruit give this huge IPA an incredibly unique signature punch without throwing the hop forward ipa out of balance from its nicely layered malty backbone. Amazing IPA brew!

Being from Michigan I always just considered Two Hearted another option besides your Buds and Millers, albeit a slightly more expensive and tasty brew. It was the beer we had our older siblings buy us when we had something to celebrate (or lament).

Now that I'm older and my pallet is more refined I find myself always returning to this old staple. For some reason I still expect to try some new (to me) IPA and be blown away by how much better it is than Two-Heart. Well, I've tried quite a few and so far nothing has surpassed or even equaled the Michigan masterpiece that is Bell's Two-Hearted.

Taste is thoroughly in line with the nose. Tasting grapefruit peel and orange, a little vaporous pine in the sinuses but, more than anything else, overwhelming caramel malt sweetness. I get a little apple juice character in the finish and beyond which I’m attributing to the yeast(?)

Feel is smooth and round, medium-dense bodied with ample carbonation.

Overall, not well balanced to my palate, all malty-sweet smoothness with very little hop bite. Nothing wrong with it, per se, just not quite my cup of tea. I’ve waited a long, long time to find a (relatively) fresh bottle and I’m not going to lie, I’m a little disappointed.

Hardly a point to reviewing such an iconic beer. There's a zillion IPAs with colorful inscrutable labels and clever names. Some of them are great, most of them are serviceable, some are terrible. Then there's Two Hearted. Perfectly balanced, deceptively simple. Honestly I don't bother with other beers anymore unless I'm at a brewery.

Poured from a 12oz bottle into a standard pint.

The look is very nice, everything I look for in a beer good 2 finger head, lacing, and decently strong carbonation. Color is a bit dark, maybe a light golden amber. Some haze present. Head becomes rocky as it dissipates, bubbles not the finest. Head has stuck around at about half a finger the whole time I've been drinking.

Aroma is essentially benchmark IPA bitterness and pine at first followed by a slight mellowing into citrus/grapefruit in the hops. Some general beer smell hiding in the back, presumably malt and yeast mingling together underneath all the hops.

Taste is similar to the smell with a kick of bitterness right at the front that sticks around, but nothing too intense. Some lemon or grapefruit juice vibes in the hops but some pine resin comes along with it. Centennial seems to be a very balanced hop. In the back is some mild light malts, but with a sort of sweetness to it. Very flavorful nothing muted about it. Decently malty compared to some IPAs out there.

Feel is right where it should be for the ABV. Its a pretty heavy beer but not quite leather recliner heavy. Its a decent year round vibe with a nice weight to it. Head retention means a thicker creamier mouthfeel but also heavier in the belly.

Overall, I'll stick with what I said earlier. Its a very nice benchmark IPA. Nothing really exciting other than the pure quality and freshness. You know what you're getting with this one, and despite only one hope its got fruit and bitter pine all at the same time. I'd still call it a "west coast" IPA

Smell: Little bit of pine, some grapefruit and a fair bit of fruity yeast.

Taste: Much like the aroma. Grapefruit and pine followed by some gentle hop bitterness. Malt is equal parts sweet and toasty. Maybe a hint of graham cracker towards the finish. Fruity yeast aftertaste. Very well balanced.

Overall: I've only had this beer once before and I pretty much shied away from it for a few years until now. I wasn't expecting much but I can now see why so many love this beer. It's one of the most balanced IPA's I've tried. It's just flat out delicious and easy to drink. Great beer. Thank you, Bell's.

yes! I got this! it is good. I will re rated it in the coming months because I drank it weeks ago. Bell's makes exceptionally delcious IPA.

I need to put it up against Odell's in a blind taste test.