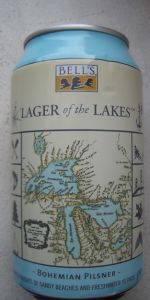 Notes: Following in the tradition of Czech Pilsners by offering a combination of firm malt and herbal hop bitterness, Bell’s Lager of the Lakes is as refreshing and crisp as a swim in the Great Lakes.
View: Beers | Place Reviews
Reviews: 480 | Ratings: 1,298 | Log in to view all ratings and sort

Overall:
A very solid Pilsner for relaxing times. Not quite a Czech Pils on the hop notes, but everything else is within tolerance.

N- On the nose I get yeast and white bread.

M- Creamy and smooth with very little drying on the finish. Soft and moderate carbonation

O- A really nice beer that is well balanced and would be a great summer refreshment. Close in character to some of the German Pilsners.

I really liked this one. Reminds me of Oberon with a bit less citrus and a bit more bitter hop flavor. Same great malty feel and taste is there. Another great summer beer.

Have had a lot of Bell's beers that I really like. This one is the only that has been a disappointment. Little head. Weak hop flavor, bread, cereal grain and sweetness that creeps through. Flat carbonation. Blah.

This one a gift from Corteva Market Development Specialist Andrew Lovett. Thanks friend.

Pours clear burnished pale gold producing 2 fingers of foamy, somewhat lasting, off-white head that diminishes to a thin surface cap leaving a decent collar and wisps of lace. Aroma is thin but pure, clean pilsner yeast, biscuit and cracker with herbal, lemon and grassy hops. Taste is cracker, biscuit, thin cereal malt forward backed by herbal, lemony and grassy Noble hops with a crisp, smooth, slightly fruity finish that delivers a pleasant and lingering bitterness. The dry aftertaste is a mere ghost of the taste and rapidly disappears. Mouthfeel is medium bodied with moderate carbonation, crisp, very clean with only a hint of spicy prickle following the swallow. Straightforward, simple and a little off balanced. Overall it is a pretty beer, a decent example of the style and very easy to drink but not much else to make it stand out.

Lager of the Lakes is a summertime offering from Bell's. It is defined as a Czech pilsner which separates it from the classic pilsner, in that it has a bitter hop to the finish. This beer could bridge the gap if you in between pale ales and pilsners.

Clear golden yellow under a few fingers of foam - this Bohemian pilsner comes off very hoppy and rather IPA-like at first - lots of hoppy, pine shellacky action up front - but has a mellower backbone of light grain and citrus... Very good-tasting and enjoyable, but may be hit or miss for aficionados of the style...

First thought when this hits the palate is PBR and that's not a bad thing. Aftertaste is much cleaner, even when on the warmer side. One can always find a beer like this but it's nice to know that a craft brewery can and will make such a thing.

Pours a clear golden yellow color. Smell o biscuit and grain with grass and bread.. Taste has a noble floral hop with cereal grain and lemon grass. A crisp moth feel and quenchable.

L: Pours a bright yellow gold with a medium white head and no lacing on the glass.

O: A little hoppier than I like in a lager, but still nice and drinkable.

Picked put a six pack of singles from a Kroger down the road from my buddy's place in Dayton. This seemed an obvious summer pick. This has a moderate biscuit bite and a touch of hops but is overall light and kind if standard. The finish is a little sweeter than I prefer for the style. Still,nice to drink outside this time of year for sure.

Poured from a can into a pils glass.

The brew is skewed just the slightest bit sweet but is solid nonetheless. Sweet malts on the tip of the tongue. Grassy/floral hops at the finish. A bit of grain and yeast in midstream might have helped things fill out. Still, a decent representation.

Overall a pretty pils that checks boxes but doesn't shine.

12 ounce can poured into a Pilsner glass.

Decent Lager. Seems to fit mostly within the Czech/Bohemian style though I would call it "Americanized". Refreshing, easy drinking and good but not memorable. Though a really fresh can may change my opinion.

Poured from a can into a nonic pub glass. A very thin, egg-white head that quickly dissipates into thin lacing. The beer has a very clear yellow/khaki appearance. The smell is a bit on the sour side, with a bit of spice...seems common to other pilsner style beers. Right off the bat this tastes like a pretty common pilsner with a crisp spice front, but then finishes with a beautiful “biscuity” malt finish with a bit of hops on the back as well. It has a very crisp and clean mouthfeel, with an almost creamy finish. Overall this is a great beer, as is expected from Bell’s, but features enough differentiation from other Pilsner-style beers to really set itself apart. Also, I love the can design, featuring all there is to love about the “Land of the Lakes”!

L- one and a half fingers of large bubble rocky white head, fades to a nice lace around the glass, pale straw yellow color.

F- medium to light carbonation, crisp and clean on the tongue, mild spicy bite on the throat.

OA- easy drinking pilsner, excellent flavor and plenty of zip, wonderful example of this style beer, compliments to the brewers on this one.

Foamy head forms with 2/3 of the can poured into a 24 ounce glass. It recedes slowly in pockets. The liquid is crystal clear with a light golden color. Fine, if skimpy, stringy lace on the glass.

Grainy smell with a good dollop of corn mixed in. Closer to a Helles than a Pils, particularly the Czech kind. Very light hop, almost imperceptible.

Mostly grainy, and far less corn (though still present) on the tongue. The hop is also far more pronounced. Neutral body but with a lower than expected effervescence. The aftertaste is straight up bitter. I never picked up on the subtlety expected from the noble hops. The combination tastes American to me.

A hearty bohemian pilsner. Strong malt presence and character. Bright, golden pour. Surprisingly sturdy mouthfeel for a pilsner, giving a knowing nod and a wink to the great Czech pilsners.

This one is straight rated a podunk 83 and Raul is not feeling that. I’d at least give this one a Dodgers ‘88 (if not more).

Get it and get it good!

The can for this beer was packaged on 7/9/19 so it is just a few days past the 3 month shelf life that is printed on the can.

Lager of the Lakes pours a slightly cloudy golden hue with a one inch head that leaves behind a decent lacing.

The aroma is pretty nice as it comes across as earthy and sweet with a slight spice element.

The flavor and finish are somewhat sweet with a noticeable spiciness that turns into a moderate bitterness. There are also elements of bread in the finish.

Overall this is an enjoyable Pilsner but still has more of an American characteristic to it rather than Czech.

The pour is straw yellow with lively carbonation bubbling up to a white, foamy head that lingers. Good clarity. Looks like a Pilsener.

The aroma has a bread dough sort of character and a more abundant grassy hop sensation. Also a kind of mashed vegetable thing.

The taste has a bready sweetness but not as toasty and crackery as I like in my Pilseners. The grassy hop finish is dry with a mild-moderate bitterness. Overall clean but not as enticing as some PIlseners I have had.

Gives you a light slightly cloudy yellow and gold appearance with a 1/2" head topping. Lager aroma was equal parts Euro and American. Firm but not over the top skunky.

Good drinking stuff, well hopped by lager standards, seems to be the noble/saaz thing, plenty of crispness to the bite in the mouth feel, well carbonated, well hopped by genre. Mild 2 row barley is appropriately done. Grain feels for days even though its a relatively light bodied lager. Having this on tap was definitely an upgrade compared to the single time I had it out of a bottle I believe. Has a lot of similarities to Urquell, aside from the massive skunky Euro lager difference.

I definitely need to pick up a 6 pack of this next summer. Its snowing out here now at the end of this summer, but 2020, gonna grab one of these, they distro'd too late in the season this year to bother with it now.

O: A very solid and easy drinking Pils. Perfect for the end of summer when you want something light.

Appearance: Pours a light, pale yellow color. Just a touch off of clear. A massive white and billowing head that clings to and crawls down the glass. One of the best heads for a pilsner I've seen. SRM of 5.5. (4.25)

Flavor: Flavor follows the nose with tons of grains. There is honey, rice, and creamed corn upfront. Lots of grains and yeast. Oh, is there ale yeast and bread. So much bread and yeast here. Leans a little sweet, but very light and pale sweetness. (3.75)

Feel: Lighter-bodied. Moderate carbonation. A touch of sweetness and yeast linger on the palate. (3.75)

Overall: I didn't pick this up as a Bohemian pilsner. It has some a lot of grains and bread with some rice, honey, and corn flavor with a touch of citrus that make it lean slightly American. Drinks similar to an American Wheat. I think it could use more Euro hops and biscuity malts for a Bohemian pils. Still, it's pretty good though with nice yeast and flavor. (Final Rating: 3.69)

Appearance: Same appearance. (4.25)
Aroma: Strong aromas of lemon citrus and wheat. Lots of dry grains, potato, and flaked wheat. Reminds me of fresh air. There's even a grapey dryness that I don't know how to describe. (4.00)
Flavor: On the tongue it's more lemon, light yeast, wheat and dry white bread. Really nice lemon profile. Some buttered potato and popcorn. Lots of salt. A nice salty, buttery profile. Similar to Urquell in terms of popcorn, but more of a sweetness and less of a pop. Sort of like a salty french fry. (4.25)
Feel: Body is medium and crisp. Finishes dry and clean. Light on the tongue and palate. (3.75)

Overall: Again, not what I would classify as a Bohemian Pilsner, but it does have nice dry lemon and wheat flavors. A little potato here too. Very much like a wheat but maybe a larger body and a touch more flavors than some of the weaker wheats out there. An absolutely decickous beer, but a lower rating b/c it misses the style of a Czech pils. (Final Rating: 3.89)

Lager Of The Lakes from Bell's Brewery - Eccentric Café & General Store
Beer rating: 83 out of 100 with 1298 ratings