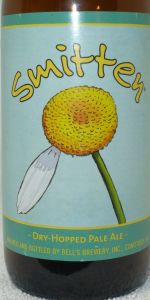 Notes: Drawn from one of our oldest recipes, Smitten Ale began as part of a series of rye beers at our Eccentric Café. The combination of sharp citrus & resinous flavors from the hops with the earthy, rustic overtones of the rye malt contribution yield an interesting take on the American Pale Ale.
View: Beers | Place Reviews
Reviews: 347 | Ratings: 1,837 | Log in to view all ratings and sort
Reviews by bobbyr5:

this is dessert island beer for me. not quite as addicting as my go to, the one claw from westbrook, but this is one of the best pale rye session beers in the country, and deserves a lot more credit than it gets. give some credit to context, i had a freezing cold can of this on a hot afternoon in old san juan, so i may have romanticized it a little in my mind, but my palate loved this to the last drop. golden in color, neither clear nor cloudy, and quite rich looking under its inch of bone white head. more like a tripel than a pale in the glass, something regal and special about it. it smells awesome too, that pale rye malt all the way, with almost no other grain character at all interfering. its high rye for sure, but no crystal or wheat or anything to weigh it down, so its clean. it also has a great hop nose, citra maybe, i get lemon zest and straw, summery and bright. the taste matches the nose perfectly, but is just so dynamic and well proportioned. the hops end up being flavorful but also delicate, more bitterness seems to come from the rye and its attendant spice character than from the hops themselves, although the light citrus notes and floral vibe is a nice compliment. the rye leads the way, which i think is so uncommon, especially in pale beer like this, they just let that malt shine, and shine it does. i could drink 20 of these, and wish it were regularly available in colorado. another example of bells doing their best work in their more simple beer, a theory i have maintained for years. this is one of the best rye beers on the market for my money!

The smell is floral, slightly citric, bready. A hint of minty rye comes through.

The taste is floral, piney, citric, bitter, with a touch of sweetened bread to balance it. There is a subtle hint of minty/spicy rye in the dry finish.

It is light-bodied, a bit fizzy. Crisp.

An easy-drinking, balanced refreshing pale ale with a subtle hint of rye.

Poured from bottle to pilsner glass. Color is liquid gold, with two fingers of white rocky head that settles to one finger, still rocky, with sticky lacing. Lots of solid streams of carbonation. Aroma is sweet tea, rye malt, and light citrus notes. Taste is that of a crisp, clean rye ale with a slight grapefruit bite. Refreshing. A little high on the ABV for me to be a summer afternoon session ale, but otherwise would be perfect mowing or barbeque ale.

A - Pours a hazy light orange with a two inch yellow-tan head with good retention.

O - Light, crisp, and refreshing. Rye kicks in at the finish.

T/F: Grains up front... giving way to a sharp and peppery hop profile. Good rye presence, mixed with some pine and resinous character. A bit spicy... tangy and tasty. Medium in body with good carbonation. Bitter finish which adds to the drinkability.

O: A fine rye style IPA from Bell's. A seasonal favorite, and always a crowd pleaser.

Full golden colored. Healthy ring of fuzz, lacing. Spicy pine. Tangy citrus. Take your pick. Definitely leads pine. Pinier than most ryes I've tried, an interesting combination. It's growing on me... fans of bitter IPAs will like this; fans of ryes with low IBUs will tolerate it I imagine.