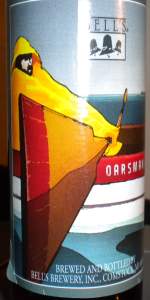 First brewed in 2008 at our original brewery in downtown Kalamazoo, Oarsman Ale grew out of our desire to explore the tradition of session beers and to create a unique, flavorful experience for everyone, no matter what the occasion.

Tart and refreshing, this sessionable, bright Wheat Ale exudes citrus and lemony aromas from Cascade hops and trades sour intensity for finesse. A perfect companion for any occasion, Oarsman Ale is a beer based in tradition, but with that distinctive Bell’s twist.

A perfect beer to compliment any menu.

Poured from a 12 oz can into a Lagunitas masonglass

O: Very sessionable.... easy drinking with good flavor. They hit what they were aiming for.

A: pours a hazy bright yellow with one finger of foamy yellow head that leaves behind a thin skim of spotty foam.

T: much like the nose, ever so slightly sour, wheaty, refreshing.

O: I could really dig this with food. Very refreshing, and not so sour as to be off-putting. I’m not a huge sour guy, so I don’t think I could buy a six of this, but I’d buy it for a party.

Pour a golden yellow color with a nice white head. The smell is a lemon citrus with a touch of wheat. The taste follows the smell with a slight tartness. Overall this is a good summer beer that I’ll be having more of.

I dig the can artwork, great use of color. There is a canned on date on the bottom. The pour is a hazy yellow sort of like lemonade in the pint glass. The aroma is barnyard funk, lemon tart & the taste is the same along with some citrus zest on the finish. I like this beer although it might not be for everybody. Cheers! B

Pretty damn tasty considering I don’t normally enjoy wheat beers! Tried this one on tap at Bell’s Eccentric Cafe. Pours a hazy darker yellow-golden color with a small amount of foaming white head and a little spotty lingering lacing. Smells surprisingly faintly of wheat, tart fruit, some bright lemon and orange citrus and weaker malt. Taste follows the nose, very nice and light and refreshing. The wheat aftertaste wasn’t too strong or overpowering and there was some nice tartness at the finish. Just a hint of sourness. Light, mild, clean mouthfeel and just enough carbonation. Quite enjoyable!

Okay now I'm getting the tartness. This definitely makes it more lively and refreshing.

Paired this with a meal featuring olives and feta, and creamy tartness of this brew was a good match. Straw gold color with a couple fingers of head. Light and refreshing with slight lemon notes. Tartness is there, but not overpowering. Reads as a very light brew; probably too light.

The aroma was definitely wheat a d citrus forward followed by some yeast and malt.
Taste was very identical to aroma with wheat and citrus being forward. Enjoyable beer that went well with food, complimented food instead of overpowering it

Smells of citrus with clean, sharp sour notes. Refreshing taste, quite clean and not lingering. Texture of a good pils with the flavor depth of stronger sours. It's simply enjoyable. A good beer, and one that will be a for sure go-to for me this summer.

Very hazy on the pour, with a golden amber color and small white head. Pleasant notes of citrus in the aroma, mainly lemon. In fact, that's all I'm really getting. Very one dimensional flavor as well as the tart, lightly puckering lemon dominates. Light lactic sourness that is just strong enough to remind you it's there throughout the duration of the beer. Medium-light bodied. An easy sipper, but a boring one that couldn't keep me interested. Had one can and was ready to move on.

M - Brisk and clean, with a crisp finish.

A: Pours a slightly hazy yellow color with 2 fingers of head that fades down to a thin cap

T: Follows the nose. Starts off with the light tartness and wheat and then picks up some light citrus and fruity notes. Finishes with lingering tartness and citrus

O: A super drinkable tart wheat ale that is perfect for any warm weather situation. Check it out

I haven't had a beer from Bell's in like five years (since I went to South Carolina where they were distributed), so I picked up a single of this one today to try since we now get some distribution from them in MA! I like the idea behind a tart wheat ale that isn't explicitly defined as being part of the revival "Berliner weissbier" style. Somehow this feels more honest to me or something. Anyway, I kind of have an idea of what to expect going into this one, but I'll try to remain as divorced from preconceptions as possible.

Pours a light, hazy straw-gold color with a nice dense, retentive head that leaves a little bit of spotty lace as it fades out. This is a really, really light colored beer; almost pilsner-like by SRM but the translucency makes me think wheat beer for sure. Pretty good looking stuff, actually.

The nose is chock-full of funky lactic lemony twang with a little bit of a sulfur note hiding behind a wheaty complexion. I'm not sure I really fully-appreciate the almost-rustic funk going on here... definitely doesn't smell like a "clean" sour, somehow. Slightly vegetal at times with some minerality as well. Hmm... not really sure where this one's gonna go on the palate, but I'm not really sold by my first impressions at all.

Okay, the flavor profile is nice and thirst-quenching... a big change from the kind of uninviting nose, for sure. "Lemonade/iced tea mix" is the first thing I think of when this hits my tongue, and it follows through with grainy, snappy wheat and a touch of light herbal/grassy hops toward the finish. Solid tartness, but it doesn't come across as sour. Each sip ends with a rather big hit of wheat which gives this a smooth and surprisingly heavy body for its 4% ABV. Pretty good balance of flavors here, and drinks pretty easy. It's a pity the nose has that sulfuric smell to it, as I was pretty turned off by that in the first place.

Oarsman Ale brewed by Bell's Brewery with an ABV of 4.00% This American Pale Wheat Ale pours out a hazy light amber color with a small white head. Mirror spotty lacing to this brew, it does stick to the side of the glass. The smell is bitter Sweet with grains and malts. There is a touch of mirror hop bitterness in the smell as well. Now for the taste, it is light with mirror tart citrus flavors, with grains and malts. The body of Oarsman Ale is a light medium. There is nothing overpowering about this brew, it has a nice light balance to it. The mouth feel is Nice, Light, Smooth, Clean, and Refreshing. Overall I'm going to give Oarsman Ale a soild 4 out of 5. This brew would go nice on a hot summer day. Bell's Brewery - Eccentric Café & General Store, did a nice job with this American Pale Wheat Ale. If you are looking for something light , I would recommend this one to you. I would definitely look this brew up again giving the opportunity to.

Pours a very pale and very clear yellow/gold with a small white head. Smells of lemon and with a touch of sourness. Tastes of slightly tart lemons, wheat, some very light sour funkiness, and maybe some other citrus. Light body and medium carbonation. Overall a pretty good 'sour' beer. Not really a berliner but that doesn't mean it's not good.

March 20th, 2015 - The Oarsman Ale is an odd duck, with all kinds of curious and head-cocking eccentricity. The aroma is both buttery and wheat, but there is also a sheen of steamed artichoke that takes me off guard. And the flavor is tangy and acidic, with a lighter palate and very fine sweetness, with a touch of white grape. The acidity defines the flavor, but the artichoke aroma keeps knocking it out of focus.

Straw colored. Fizzy head dissipating quickly. Some tart citrus in the nose. Also citrus and wheat in the mouth, balanced by mild sweetness. Drying finish. Quite highly carbonated. A fairly simply, refreshing, light ABV brew. Not outstanding, and less tart/sour than some of the others out there, but good. —Reviewed 2018/01/04

Poured from a 12 oz can into a tulip glass.

Pours a hazy golden straw color with a finger of effervescent white head. The head is gone instantly, leaving very little in the way of lacing.

The aroma is incredibly faint, bringing notes of grains, wheat bread, and lemon.

The flavor brings a fair amount of wheat and cereal grains, followed by some subtly tart lemon and grass.

The feel is light bodied with lively carbonation. Very crisp and dry on the finish.

Overall, a pretty solid beer that's quite refreshing and sessionable. Definitely a solid introduction to the style, despite being somewhat bland.

Taste- Lemon zest, grass and a slight hint of floral.

Overall- A minimalist beer with big drinkability. This has lawn mowing beer written all over it. Decent enough but nothing complex and not something I'd buy again.

Poured into a stange, the appearance was a semi-pale burnt yellow almost a restrained orange color with a thin white foamy head that fell off pretty quick. No lace.
The aroma had some sweet lemon rind and pulp, super light bitterness, some refreshing grassy sweet aspects, light sour-ed wheat and ended with a tickle of bright crisp sticky tart rind.
The flavor brought the sweet to the sour to the tart to the tang bringing in the citrus, the wheat, the grassiness all together to ride into the aftertaste nicely.
The mouthfeel was light bodied with a sturdy sessionability about it. Carbonation felt fine, pretty low. ABV felt good and crushable.
Overall, if I lived in this distro, I would pound the crap out of these cans during the Summer.

In Texas I would rank it behind the Berliner Weiss's from Live Oak and Saint Arnold.

This is still really good though.

L: pale yellow, almost 100% clear with just a bit of cloud in it from the bottom of the can; pushes up 1/3-inch tall head of white foam that dissipates quickly; no stick or lace

F: light, well filled out by carbonation but with a slight ale slickness to it ... even has a softness to it

O: about the only thing that could make this better is if it had less alcohol ... something in the 3.3-3.5% ABV would make it too good to be true; full of flavor with a great tartness that isn't overpowering; a no-brainer to keep in the fridge as a closer year-round and a perfect summer brew ... and because the sourness isn't too much, it's not a bad brew batting out of the leadoff position to start a session depending on your particular palate