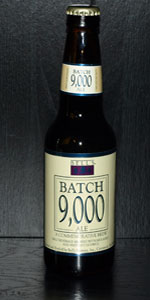 Notes: "Black, dense, and rich, this is a great ale for the cellar."
View: More Beers | Place Reviews
Recent ratings and reviews. | Log in to view more ratings + sorting options.

4.6/5  rDev +14.1%
look: 4.5 | smell: 4.5 | taste: 4.75 | feel: 4.5 | overall: 4.5
Trying for the first time 11 years after bottling. Still a nice hiss when the cap is popped. Pours motor oil black with little head. Looks perfect! I immediately think of sherry/port when I first sniff this one. Lots of figs and dates. Black licorice is definitely raising its hand. Blackstrap molasses, a bit of honey, a whiff of pipe tobacco, dark chocolate, and a hint of french roast coffee beans. Of all the notes, the molasses screams the loudest. The taste is super intense, balanced, and smooth. Follows the nose really nicely, with intense notes of molasses, dark chocolate, sherry, red wine, prunes, walnuts, pecans, blackberries, and an oak bitterness on the back end. However, there is also a sherry sweetness mixed in at the end as well. This is beyond outstanding, and has aged beautifully. The mouthfeel is thick and creamy. Coats and the mouth and sticks around for a LONG time. What a lovely beer to both smell and sip on.
Sep 07, 2021
Rated: 3.96 by SMH_NWI from Texas

O- I didn’t have this fresh, but at nearly 10 years old, this is fantastic

Reviewed by YonderBrew from Ohio

Rich and complex. Boozy, but not harsh. Outstanding mouth feel.

Bell's needs to bring this one back.

This is quite the blast from the past. It's aged exceptionally well- there's only a slight touch of oxidation, and it's not the cardboard type of oxidation. It's just the slightly stale sherry wine type of oxidation, which works pleasantly here. There's some very light smoke, and tons of caramel/toffee/molasses malt goodness. There's a nice vanilla creaminess too.

This is medium bodied, and very drinkable, despite the age. The booziness is basically completely subsided. It's quite creamy.

I never thought I'd be able to try this beer. I'm pleased to report that it's aged quite well.

O: Just awesome. I didn't have this when it came out, but after 8 years in the cellar this beer is 100% delicious. Love this... and glad I have a few more. A perfect cold winter/dessert sipper.

Reviewed by onemoorebeer from Michigan

Reviewed by HattedClassic from Virginia

Opaque black that has ruby notes around it. Not much thickness and looks fairly oily and slick.

Taste is really and complex. Mainly date and raisin notes from the malts and a very light roast as well. A slight alcohol note but barely noticeable.

Very good and delicious. Glad for the opportunity to try this.

Reviewed by bladehines from Kentucky

L: Very dark, black slight red tint, slight brown around edges.
S: Heavy cherry and dark chocolate upfront, molasses, Carmel, flirty notes
T: Instant taste of tart cherry and chocolate notes followed by coffee and finished with more tartness, slight bitter on the end.
M: Mouth feel heavy no alcohol notes, silky, very coating of the mouth.
O: Held up super well aging this long!!!! Fresh the beer was over powering, glad I aged it!!! One of the best beers I've had in a long time! Wish I had more!

Reviewed by KensWorld from Florida

4.41/5  rDev +9.4%
look: 4 | smell: 4.25 | taste: 4.5 | feel: 4.5 | overall: 4.5
From bottle cellared since 2010 I believe. Not much head left in it. Has sediment at bottom of bottle. Smells like dark fruit, soy sauce and molasses with roasted malt, nutty and woodsy aftertaste. Very complex beer that has a dominate tangy fruit taste. Overall it looks to have held up well but I'm sure it's much different tasting then when fresh. Very much enjoyable after it warms to room temp. Worth the wait
Feb 02, 2016

3.98/5  rDev -1.2%
look: 4 | smell: 4 | taste: 4 | feel: 3.75 | overall: 4
i might be a loner one this, but i didnt love it the way others do below, and instead offer the idea that it is now past its prime. i have no clue what it tasted like fresh, but its safe to say its faded out quite a lot. still a darn fine ale, but i would not rank it among the better american strongs on the scene right now, thats for sure. it looks almost all the way black, with reddish brown edges in the right light, minimal head. smells nice too, a tad oxidized, but not beyond what one would reasonable expect in a beer this old. it has notes of root beer and stale coffee, as well as alcohol, which is pretty pronounced even with all the cellar time. cool woodiness too, almost like a birch syrup or something, sweet and wet, but not really bourbon as i know it. is this even aged on wood? i would guess no, but it has that mellowness from its maturity. flavors of molasses, toasted barley, burning wheat toast, sarsaparilla root, and black tea are all there, but the beer is still pretty sweet, and its very alcoholic. distractingly so, especially with temperature. tasty beer, but i think it likely peaked a year or two ago. my advice is to drink now.
Jan 18, 2016

3.98/5  rDev -1.2%
look: 4 | smell: 4 | taste: 4 | feel: 3.75 | overall: 4
A: The beer is jet black in color—only faint traces of dark brown are visible near the edge of the glass when it is held up to a bright light. It poured with a short tan head that quickly died down, leaving a thin collar around the edge of the glass.
S: Moderate aromas of black licorice are present in the smell along with notes of molasses.
T: The taste follows the smell and also has additional notes of dark fruits. There is a light amount of bitterness.
M: It feels medium- to full-bodied on the palate and has a low to moderate amount of carbonation.
O: This beer held up quite well with the aging except that the amount of carbonation has dissipated a bit. The beer does a very good job at hiding its alcohol from the taste.

Reviewed by bluehende from Delaware

Appearance: Pours near black with a half inch light brown head dissipating after a few minutes into a thin lacing. Minimal lacing down the glass.

Smell: Rich, dark chocolate truffles, molasses, caramel. Excellent. I'm not really getting much in the way of brewers' licorice, but frankly that's probably a good thing as I don't think it would benefit the overall aroma. There is tons of depth to the nose.

Taste: Intense. Heavy brown sugar and burnt caramel flavors up front, molasses, a touch of dark fruit. Flavors of brandy and dark chocolate round it out. Finish is fairly sweet although the lingering slightly burnt flavor (which I mean in a positive way) keeps it in check. Just a touch of alcohol heat is detectable underneath the myriad layers of malt. Extraordinarily rich and decadent.

Mouthfeel: Rich and full-bodied but velvety smooth texture which is enhanced by minimal carbonation.

Overall: Truly exceptional beer. That being said, I probably wouldn't want to try and knock down more than one in a sitting as it can overwhelm the palate pretty quickly. But this is hard to beat for a slow sipper after a long day. I don't know how this drank fresh (this being my only bottle), but it's hard to believe it was better than this.