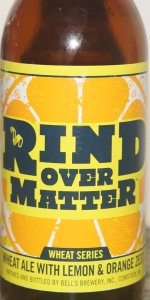 Notes: Rind Over Matter is a bright and refreshing American Wheat Ale, brewed with fresh lemon and orange zest, and a 5% ABV. It is easy-drinking, aromatic, and has a lighter malt profile than Oberon that allows those citrus notes to really shine. It will be available through October, while supplies last.
View: Beers | Place Reviews
Reviews: 18 | Ratings: 47 | Log in to view all ratings and sort
Reviews by zeff80:

On draft at 44 Stone. Poured a slightly hazy, golden yellow color with a small, white head of pillowy foam. It left sudsy trails of lace. It smelled of lemon zest, orange, cracked wheat and some yeast. Nice tart bite of lemon with citrus, wheat and some caramel flavors.

It's pretty much Leinenkugel's Summer Shandy but you're out two more bucks for a 6-pack.

I dig the lemon-lime but it's a bit overcarbonated and finishes on bitter rindy flavour that isn't terribly pleasant.

12oz bottled 08/12/21 (less than a month old) poured into a pilsner glass at fridge temp 5% ABV. The beer pours barely hazy in a light golden amber. The head is off white and recedes to a thin ring tiny island. The aroma is mild with wheat malt and vague citrus. The taste is crisp, light wheat malt with front to back lemon and orange. Minimal bitterness. The mouthfeel is thin to medium bodied with average carbonation and a mostly dry finish. Overall, very good.

12oz can. Stamped on can bottom is 'PKGD 10:13 081121'.
Cloudy, straw colored body. One pour had the white head fill up to the brim of a 16oz glass. Leaves scattered spots of lacing.
Aroma of wheat and limited citrus (lemon and orange).
Taste is a wheat ale twisted with the addition of lemon and orange. The late bloom of citrus recedes in the mostly wheat ale aftertaste.
Medium mouth feel with a fuller wheat dust dryness. Good carbonation.
The wheat reminds me of wheat dust in the grain bin. This would be a good beer to hydrate after shoveling.

On draft at the Eccentric Cafe. Poured a pale yellow, with minimum head and lacing. Aroma from orange and lemon zest pronounced and immediate, as was the taste. A mild wheat flavor without the clove and banana overtones found in Weizens. Light, clean, and very refreshing. Limited availability? Jeez, RoM would be a year-round session pounder back home in FL!

Overall: This one drinks as described. The citrus and wheat are pronounced. Definitely a citrus-forward wheat beer. I have to say that it drinks pretty well for a Summer Wheat Ale. My only question is why is it mid-October and they are just now releasing this one is my local Trader Joe's? They're at least 3 months too late. A great summer beer, but folks it's been pumpkin spice season for two months now. (Final Rating: 3.87)

Passes the chug test and that is good enough for me! Flavors of lemon peel wheat and slight cracker malt not sure if it's enough to get me to buy more but I would crush many at a party!

Appearance: It has a moderately hazy, light gold body that allows fuzzy shapes to be visible through it. It has a medium-large white head with good retention and lacing.

Aroma: Lemon zest comes through immediately, then a light bit of wheat cracker scent comes through but it overpowered by the lemon. Some lime zest character pops in as well. The lemon aroma is very strong.

Mouthfeel: It is sharp and light bodied with a punchy citrus bitterness.

Overall: The label states that this is a 'WHEAT ALE WITH LEMON & ORANGE ZEST." The orange never seems to really come through but rather the beer has a bit of a lemon-lime flavor with a strong focus on lemon. The beer lacks nuance and balance and the lemon character doesn't make room for much else in this beer. It is drinkable and it has its moments with a bright citrus character, but it is very much a lemon bomb. I probably wouldn't drink it again and I would only recommend it to those who really enjoy lemons.

I got a can of this beer off the single shelf from my local Giant Eagle store. It poured a hazy golden with thin white head that is not leaving any lace. The scent had lemon and orange peel zeal. The taste was nicely balanced and easy to drink with a nice mix of orange and lemon presence. The mouthfeel was lighter in body with good carbonation. Overall it is a good beer.

It is like bells decided to make a natural light version of Oberon. It's not like anything I've had from them. It's probably good for staying hydrated?