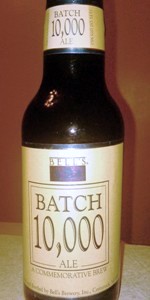 Look is dark brown, not black.

Smell is interesting. I like that school lunchroom trash-bin remark a previous reviewer made. It gets better.

Taste is great & complex. After tasting & enjoying the other beers that I would deem similar (Founders Nemesis '10, Sierra Nevada 30th Jack & Ken's Black Barleywine, ST Iniquity, Widmer W'10. et al...), I would have to say this is one hell of a fine beverage. Nice & smooth. But then again, I'm a raging alcoholic. Take that for what it's worth. Now & forever. Amen.

Feel is awesome. Someone said it stays there. Yep. Because I want it to. stay. there.

Dinkability is off the chart. Taking it all into account as the nurse (she's a new one, cute - nice purse) administers my IV, I am glad I purchased more than one 6'er.

A: Poured from a bottle to a pint glass. Had a dark brown color with ruby tints, and a thick, cloudy consistency. There was a half inch of foamy, somewhat long-lasting head. Good lacing.

S: An interesting aroma of hops, coffee, malt, and a sugary component.

T: Tasted of hops up front, roasted coffee, a nice maltiness, and some chocolate. A fascinating melange of a flavor. Can't really figure out what it's supposed to be, but it is tasty.

M: A well-carbonated beer with a smooth, dry finish. Medium-bodied.

12oz bottle into a Bell's glass.

Batch 10,000 comes out of the bottle looking dark brown/ maroonish with some with black interjected. Not the darkest beer and a little lighter than batch 9,000. Nice clumpy islands of foam off white looking, sheets of lace. 10,000 smells strong, being in the strong ale category is spot on cause I can't determine a particular style. If I had to guess in the the black IPA territory with barleywine features. Alot of malt (over 40 of em I believe) and a strong odor of hop resin. Ten thousand is interesting in that it is what it is. With such a exuberant amount of ingredients I don't think a particular style was thought out. What we have here is roasty/toasty malt mix with some chocolate and licorice hiding beneath a wall of hop taste that is neither citrusy or earthy, it's just strong, reminding me of a very light Devil Dancer flavor, except that this one tastes good. Some candi cane and I sense dark fruit that will only come out with time in the bottle, it's not very noticable now, this is a young bottle. Feel is a big medium with power and grace, a bit warm but not oozing in alcohol. Carb is adaquate. This is not a palate crusher and remains drinkable although I think this has some legs on it, if I had the willpower to cellar one Id do it, this may go the distance.

Appearance: Dark rich brown with some copper and brick red when held to direct light. Minimal espresso cream colored head drops to a tiny collar with minimal lacing. No carbonation to speak of.

Smell: Super sweet. Bourbon, vanilla, some oak, toffee, alcohol, and deeply cooked and caramelized malts. Slightly roasted. All malt, no hops. A bit damp with some licorice and earth. Some musty wood and a soft earthy component. Deeply complex and layered with malt depth.

A little less complex than 9000, but easier to drink. Odd smoky woody thing going on and it's novel.

taste much like the nose - what i taste is a smoked chocolate 2 hearted with belgian yeast??

Had tonight at the Galaxy Hut in Arlington, VA. Poured from a 12 oz. bottle into a pint glass.

a - Pours a deep mahogany color with two inches of tan head and moderate carbonation evident. Head is a bit frothy and has decent retention.

t - Tastes of roasted malts, chocolate, dark fruits, and alcohol. A slight step down from the nose.

d - A lot better than batch 9000, but still not a great strong ale. A little too boozy for me. Glad I got to try it but wouldn't look to have again.

On tap at the Bells Tap Takeover at Beer Run, Charlottesville, VA. Served in a nonic.

Appearance: Arrives a dark though transparent amber sepia, with the difference between the surface and the rim of the glass suggesting an initial one finger or so of tan lace, though nothing remained by the time this one was delivered to the table. The surface lacing is consistent, at least, replenished by steady carbonation, and there sits atop the surface a bubbly, frothy collar of foam, though there's no lacing on the sides of the glass.

Aroma: Toasty malts dominate, relatively dry and inoffensive though relatively uncomplex. It's amazing that something made with so many different grains and malts can smell so straightforward. Hints of rye do begin to emerge as this one warms, but other than that it's just slight dark fruits (raisins), toffee, and spicy notes, suggesting cinnamon raisin toast at points, though that perhaps does it too much justice.

Taste: Rye is a little stronger here than in the nose, mingling well with spicy moderate to slightly-south-of-high hoppy bitterness, leafy tobacco notes, oranges (chocolate oranges), raisins, leather, and figs. The malt base is still largely toasty, though there are flashes of lighter roasts, toffee and molasses mainly. Faint alcohol brings up the rear, a little stronger than I'd like or that I think it should be at 9.2%.

Mouthfeel: Plenty of lift in this one, but the body has enough thickness and heft to it that the end result is bright, but not eruptive or distracting.

Drinkability: Lacking somewhat. As I expressed above, it seems that what's good for soup or a casserole or salad is good for beer: careful layering of a few intelligently selected and complimentary ingredients (even if they're not your favorite) can produce a result vastly superior to tossing the kitchen sink in to a brew kettle (or wok, or salad bowl, or whatever the case may be). I'm not a fan of syrupy thick sweetness or anise, but I preferred Batch 9000 (brewed with both brewer's licorice and molasses) to this one. As it stands, this one isn't a bad beer, but it is slightly unfortunate to see the "Batch X000" series - a series that brought such outstanding winners as Batch 6000 and Batch 7000 and less superior but still fantastic brews such as Batch 8000 - go out with a whimper, rather than bang.

A - Hazy burgundy. Barely any light getting through. Moderate head dissipates slowly and leaves no lacing

S - Very interesting... I smell raisins immediately, followed by berry/grapefruit from the hops. Deeper digging reveals sweet chocolate and almost a clovey smell? maybe it's all the Belgians getting to my head...

T - A lot maltier than the smell led on. Hops taste a lot more woody than fruity as the smell led on. Toffee, caramel and coffee notes are all present. Very rich flavor. Hops are fairly muted, but their pine flavors show up more prominently in the aftertaste. Very multi-dimensional flavor profile.

pOured into my great lakes sniffer.

A - Dark opaque black with a thin tan head. Some lacing down the sides of the glass and a little bit of carbonation can be seen as well.

S - Smells of toasted malt and burned wood, charcoal. There is a slight yeast funk way in the background and it has an old ale type aroma.

T - Dry wood, lots of smokiness, and some faint hops. There is good use of roasted malt and a faint hint of residual sweetness.

M/D - Low carbonation, medium body, and the ABV is not present at all. Has an aged tartness to it in the aftertaste.

Not as complex as expected, but not simple either. Goes to show great beer doesn't need a gazillion ingredients to be brewed.

Poured in to Duvel tulip glass

A - Dark brown, almost black in colour with half a finger of light brown head. Much darker than I expected.

S - An interesting mix of bitter hops and sweet malts. The malts are predominantly roasted malts, typical of a porter, with some roasted nut and chocolate notes coming through. Some caramal and brown sugar sweetness lurks in the background. Some bitter hops are present as well with some citrus and pine notes. A light smokiness is present as well. Quite a complex nose but not as hoppy as I expected.

T - Dark roasted malts are the predominant flavour - smokiness, toasted nuts, chocolate and coffee. The hops impart some good bitterness in to the palate along with some light citrus notes and some pine. The bitterness lingers slightly in the finish. Somewhat reminiscent of a Cascadian Dark Ale.

D - I really enjoyed this one. Would be interesting to see how this would age ... if I had any more bottles.

Taste:
Very complex. Caramel, toffee, brown sugar, grapefruit and citrus peels. Mixed spices with a touch of black pepper. Undertones of cinnamon, smoke and dark fruits. Roasted nuts and a dirty root like flavor as well. A bit of a food fight going on here, but surprisingly works well enough.

Feel:
Medium/thick with proper carbonation to match the style.

Despite the identity crisis, it was still a very good beer.