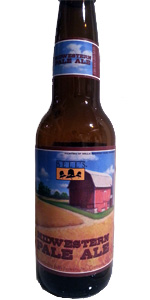 Notes: A blond ale reminiscent of the golden fields at harvest - made with Michigan-grown barley and a delicious blend of pale malts with a distinctive spicy, floral aroma and taste. We invite you to reap what we've sown.

Brewed with barley from their own farm, it has a noticeable terroir of sorts—a trend that we hope sticks, as it’s adding dimension to the beer world. Balance and dryness amp up the drinkability to 10. The Earth doesn’t shake, but we’d make this a mainstay in our beer fridge. You can’t get much more American than this.

Don't count out the old classics. Tried and true, this is delicious. Orange/copper, fruity, malty, slight bitterness to pull it together.

My first bottle of this was 4 and a half weeks old and reeked of skunk. The second, purchased from a different store, was 3 months old and not light struck.
L: It pours hazy gold with a slight orange tint under a 2” cream colored finely bubbled foam collar that hugs the side of the glass.
S: The nose is a little muted due to age but clean rich malt aromas join with light caramel and a slightly sharp hop aroma.
T: Starts off like a liquid baguette with a light caramelly background sweetness and finishes with a big bitter emphasis that balances well with the well developed malt flavors.
F: Creamy, medium body and carbonation.
O: This is a well balanced, big flavorful midrange beer that is easy to drink.

Presentation: It was poured from a brown 12 oz bottle into a pint glass. The label on the back has a brief description of the beer and it lists the abv at 5.2%.

Appearance: Midwestern Pale Ale has very thick and creamy off white head which hangs on well. It sits on top of a deep golden/light amber body with some hazing and yeast sediment floating around. As I drink it makes lots of cool lacing on the glass.

Smell: It has a sweet bready and malty character with a light herbal, almost mineral like hop note for balance.

Taste / Palate: Up front it has sweet honey and orange marmalade flavor with a smooth bready base underneath. Light herbal and floral hop notes move in and a good balance of hop bitterness to the finish. It has a solid medium to full body and the palate feels smooth and balanced with carbonation.

One that I've been reluctant to purchase... or even try, just based on the relatively poor reviews it has. But hey, it's Bell's, so it can't be that bad, right? ....Right?? Midwestern Pale Ale pours out like a foggy pear skin; muddled and overrun by a jungle of small and sifting sediment particles. The porcelain head looks like a cloud, overcasting the unfiltered brew and taking its sweet ol' time to finally settle itself.

The aroma is kind of confusing. And not really in a good way. Mildly sulfuric, toasted bread, pale malt, and a touch of meek, musty hops, reminiscent in my mind of Saaz, or at least some kind of Noble hop. I get a chunky, crisp lager whiff, too, very akin to lagering yeast. Really, this smells like more of a lager than an ale, but not even a *good* one at that. Kind of boring and plain, and not really fitting of the "American Pale Ale" namesake.

Equally disappointing is the flavor, starting off with a combo of light DMS, sulfur, and off-beat graininess - this beer almost tastes like it has been sunstruck... so much for the brown bottle. Metallic notes, musky, and earthy hops that are far too faint with a finishing sucker punch of dirt, crisp yeast, and unexciting pale malt. Light bodied, not a whole lot in terms of palate presence, though the carbonation is crispy and dry, again, giving me that "lager" feel.

Bleh, wow. I'm pretty upset with Bell's on this one. Not at all what I think of when I hear the term "Pale Ale". For a brewery that has released stuff like Two Hearted, Hopslam, and Expedition Stout, you kind of expect more out of their constant rotation pale ale. Instead, we have this boring, bland, mildly off-putting, almost lager-ish but not as good, confusing mess of a beer. Good thing they have so many other great offerings - this one won't be missed.

A - It is pale yellow and hazy. It is topped with about two inches of off-white head.

S - I get a lot of malt. I was hoping for a little hops. It is sweet caramel and a little grainy.

O - Boring. I have had some great pale ales this summer and was hoping for another. This was a big swing and a miss. I would much rather drink Oberon all day.

This bottled beer was on sale for a six-pack as a featured craft ale. Boasting of Michigan barley, this is a decent American pale ale. Nice dark gold color with an aroma of delicious hops, the citrusy taste actually lacks the happiness I desired. The taste is not light, and not bad, but will keep me on a search for amazing American Pale Ales.

12oz bottle poured into a snifter. The brew appears a hazed copper color with a white sudsy head that fades leaving a wall of lace on the glass. It is quite decent looking with fair retention. Some spots of sediment are seen throughout solution.

The aroma isa bit dusty with biscuit grain, sulfur, toffee, caramel grain and a hint of fruity to floral almost perfume aspect. Some almost like butter is noted towards the back and it increases in character as the brew warms up.

The taste is equally buttery as the nose suggests with bready to biscuit grain. Some sulfur, grass and herbs are thrown in the mix with hints of caramel but without the accompanying sweetness.

This is a medium bodied brew with a modest amount of carbonation. It is a bit watery and well, just strange and not enjoyable enough to warrent wanting to have it again. Of all the stuff bell's makes that I had the opportunity to try, this is the biggest let down.

12oz bottle, bottling date 1/16/13 poured into a pint glass
A: Hazy orange color with a one-finger head that lingers
S: Aromatic, with strong malt, florals and just a hint of hops
T: Lots of grain, florals up front then an absolutely empty midpalate and a slight hop note on the finish
M: Medium-bodied, again empty midpalate, otherwise decidedly average
O: In general I'm a fan of Bell's but unfortunately this is probably my least favorite beer I've had from them. There's just not a lot of complexity or anything intriguing on the palate.