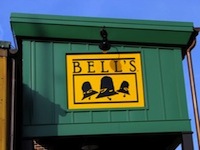 Rated by Hallbrauhaus from Mississippi

4/5  rDev -8.3%
vibe: 4 | quality: 4 | service: 4 | selection: 4
Visiting Bell's had been on my want list for some time, and a recent driving trip to the midwest finally made it possible. While the wife and I had a nice visit, I would be lying if I didn't say I was a bit disappointed by the experience.

The Sunday we visited, the cafe was completely slammed, I assume largely due to the concert series going on nearby. That being said, the cafe is pretty sizeble, with several dining room areas and an upstairs area. The vibe is very low key and relaxed here, with a few TV's scattered around the rooms and predictable beer schwag and pictures adorning the walls. The cafe seemed like a pretty nice spot to hang out with a beer or three. This being the Bell's "mothership," I sort of assumed they have some interesting seasonals or limited released beers on tap. Maybe black note, double two hearted, BA expedition, hopslam, oracle or something like that. No such luck. The tap list largely consisted of Bell's cores beers (regular two hearted, expedition, oberon, etc.), with a few one offs like an imperial wheat beer and a Belgian style single and tripel. I think there were roughly 20 beers on tap the day we visited. The selection was OK, but most of the beers on offer can be found without much effort wherever Bell's is distrbuted. The draft two hearted was very fresh, something I appreciated, but that was probably as close as I came to getting excited about the tap selection. Quality is about what you would expect, given the selection. If you're a huge fan of Bell's you'll probably be OK with whats on offer. Everything tasted fine the day I was here (I ended up getting 4 sample pours), but again, I wasn' really wowed by anything.

Service was OK. As I mentioned, the place was slammed and it took a whiile to get a table. Once we did, the waitress stopped by pretty much immediately to take our order. Prior to that, we stood in line at the bar to order our beers. That being said, everyone was pretty friendly, the bartender seemed pretty knowledgeable.

In the end, we had a nice time here, but I didn't leave the cafe feeling as if I have a burning need to come back any time soon. Oh well...

On my visit, they had 20 beers on tap plus mead and cider. Within those beers was a good variety of styles, including a couple of belgians and IPAs, as well as a couple wheats, stouts, and an old ale. They also had a tripel, which I will absolutely always give extra credit for.

Overall the beers were good, though frankly nothing totally blew me away. Bell's is legendary, and I can absolutely see how at one time this was some of the best beer in the country. But I have to say, I was a bit underwhelmed -- perhaps due to overanticipation, perhaps due to the recent buy-out; it's hard to say.

As for vibe, the taproom is giant with wood, brick, and tile, and is generally quite beautiful. The service at the bar was friendly and nice, though they don't have bar seating at the moment. Overall I liked Bell's a lot, and am glad I visited, though I am guessing it is not quite up to what it was in its heyday.

Reviewed by pjbear05 from Florida

5/5  rDev +14.7%
vibe: 5 | quality: 5 | service: 5 | selection: 5
On vacation in MI a stop at the Eccentric is a must. Of course so many styles available I started wih a four flight before settling on Rind Over Matter. Boy, that stuff would be a year-round session pounder back home in FL. After a few pints walked to the General Store for some T-shirts. An afternoon well spent.
Oct 09, 2021

Reviewed by Stooven from Illinois

3.88/5  rDev -11%
vibe: 3 | quality: 4 | service: 5 | selection: 3
Granted, it's been more than a year. However, Bell's lacks character. I was hoping for less of a college bar feel and was also hoping there would be a greater selection (like one-offs) on tap apart from the seasonal rotation. My wife and I have hit dozens of MIchigan breweries on vacations and several more than once (Greenbush, Founders) but there's no aching to revisit Bell's.
Feb 11, 2021
Rated: 5 by HardyA34 from Michigan

All were drinking great. Also bought a mixed case of Expedition Stout, Porter, Two Hearted, Kalamazoo Stout, Best Brown, Oberon, and Oktoberfest to go. No Oracle to be had on my visit, but I go to try four new beers, so all was well. Our overall experience was wonderful, and I highly recommend this place.

Reviewed by TooManyGlasses from Canada (AB)

4.41/5  rDev +1.1%
vibe: 4.5 | quality: 4.5 | service: 4.25 | selection: 4.5 | food: 4.25
November 2019 second visit from Edmonton, Alberta - lunch on both occasions on a weekday. Busy but not packed - sat in pub side - high ceilings - bright decor.
Friendly and prompt service - responsive to queries and for recommendations.
Nice selection of multiple styles of superbly made beers - clearly Bells knows how to make beer!! We shared a couple of flights and not a bad beer in the bunch.
Food is fairly standard pub fare, but made well and delicious.
The General Store is well stocked with both merchandise and excellent selection of beer to go (even had different vintages of Third Coast Ale).
A definite must for any craft fan - worth the trip...and you can say you were in Kalamazoo.

4.95/5  rDev +13.5%
vibe: 4.5 | quality: 5 | service: 5 | selection: 5 | food: 5
I was in Ann Arbor and was able to get out to Eccentric Café and to the General Store, which attached but accessed from a different door. Eccentric is the best place of its kind I have been thus far and I have been to some very, very highly respected breweries throughout the New England, the Mid-Atlantic States and northern California. If you intend to go, just be aware that the parking in front of the General Store is strictly short term. Don't fret, as Bell's has a decent sized parking lot across the railroad tracks from them for which they validate.

The server was fantastic, making excellent, spot on recommendations and talking candidly about some behind the scenes stuff, which was just fascinating. I've liked Bell's beers, they are great out of the bottle, but at Eccentric, mind blowing. They serve in 5 oz (suitable for a flight) and 16 oz glassware, but the server will bring you tastes to help you make up your mind. They had about two dozen brews on tap, a quarter of which were labeled as experimental. I was able to try the first installment in the Leaves of Grass series (and may have scored a sneak peak at the second). If the rest are as good, please, please, please distribute them nationally (especially to NY).

Eccentric's space is huge with a bar sporting perhaps 40' of frontage and lots of different seating thereabouts. One can eat there or in a dedicated, sit down dining area off to the left. The food was excellent: I had the Italian Sandwich special which was out of this world. The General Store sells Bell's memorabilia, prepackaged beer, and home brew materials.

Not just saying this, if it were remotely near my home, I'd be a regular. If you are anywhere near Kalamazoo, go; you'll be glad you did.

4.6/5  rDev +5.5%
vibe: 4.5 | quality: 4.5 | service: 4.75 | selection: 4.75 | food: 4.25
We visited the cafe twice during a long weekend. Staff at the bar were cheery and servers in the cafe were prompt and helpful. Hard to find someone there, staff or patrons, who wasn’t in a good mood. The vibe is friendly and welcoming. At the time of our visit, there was a concert that was barely audible from the main cafe area (held in a small venue in the back) and that was appreciated. The food was above standard pub food, well prepared and a good selection for the differing tastes of the members in our party.

The beer. We came for the beer. And a great selection of favorites was on tap including, among others, the 30th Anniversary Cherry Stout, Expedition Stout, Two Hearted Ale and more. I even found a few stray bottles of Black Note in the General Store, so check it out.

By all means sign up for the brewery tour. It was informative and a great look at the original place. Our guide was well seasoned and answered all questions. We hope to tour the newer Comstock facility another time.

We’d definitely go back to the cafe if in Kalamazoo. Highly recommended.

4.54/5  rDev +4.1%
vibe: 4.25 | quality: 4.5 | service: 4.75 | selection: 4.5
11/4/18 (Kalamazoo): Visited today for a brief visit, fortunate to hit the brewery and general store on All Stouts Day. Line was 15 deep when I arrived 15 minutes before open, about 50 deep when they opened. Very brick structure, mix of modern and vintage decor. Both front of house and a large back room where concerts are held, and large outside grounds open to accommodate the crowd. Nowhere to sit at the bar, you order up front (or server) and plenty of tables were available. We grabbed a table in the upper section of the back concert area

Didn't have a chance to tour the brewery beyond walking around the public areas, or have the food which looked great.

Went to the General Store to look around and pick up a six pack of Two Hearted IPA. Nice supplies for home brewers are available, as well as brewery merchandise with decent pricing.

Definitely want to return when I have more time for a tour, meal and several offerings.

Reviewed by edward_boumil from New York

4.01/5  rDev -8%
vibe: 4.25 | quality: 4.25 | service: 4 | selection: 3.75 | food: 3.75
Did the tour and ate at the brewpub
V: Really cool indoor deco. Some interesting stuff on the walls, my fiancee and I were quite entranced with some of it. Had some old metal pieces holding up rafters, love that kind of stuff. Sort of an old meets new theme I guess, if I had to summarize, with an artsy sort of vibe
Q: Beers were great. Really enjoyed their sour brown ale
Ser: Tour guide was awesome, bartenders were great, waitstaff was good as well.
Sel: Was so-so. Was told during tour that some of the beers on the menu were only available there at the brewery, but they seemed to be out of most of them. Was a bummer. Overall though found some great beers.
Food: Was good, got a meat and cheese platter. Could have used more cheese, but everything on it was great

Cool conversion of a brick warehouse with bar, beer garden and restaurant.
Service was upbeat and inviting. There were no other beers other than Bells, which is ok but not a good consumer practice.

All four of us agreed that the food was very good for a brewpub.

Glad to make this pilgrimage.

Rated by MKrauss from Pennsylvania