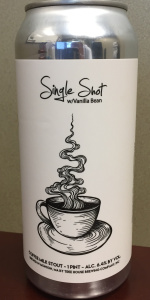 Notes: We are excited to present the first variant of our coffee milk stout: SINGLE SHOT w/ Vanilla Bean! This modification builds upon the original by conditioning the finished beer on Madagascar Bourbon Vanilla Beans. We also varied the typical coffee blend by infusing a single beautiful coffee, Guatemala Candelaria! What resulted is a beer that exhibits a subtle and well integrated vanilla note with rich coffee character while retaining a wonderful airiness and drinkability. The crew here tastes bourbon chocolate, brown sugar, and vanilla with a soft coffee acidity on the finish. The vanilla reveals nuanced character as it warms, though never overwhelming the senses, with the coffee notes slowly mellowing. This is a real treat to us, and one that marks the start of an invigorating path for Single Shot!
View: More Beers | Place Reviews
Recent ratings and reviews. | Log in to view more ratings + sorting options.
4.46 by TangoJuliet from New York on Nov 28, 2021
4.25 by smb71481 from Vermont on Nov 21, 2021
4.25 by aasher from Indiana on Aug 24, 2021
4.25 by sunnytropic from New York on Feb 10, 2021
4.78 by Jcoleman4 from Ohio on Feb 02, 2021

Appearance: 4 - book but it looks a bit thin. The dark brown head fizzled away quickly.

Taste: 4 - interesting. Almost all coffee. Somehow the vanilla shines through in my nose while I'm drinking, but I don't really taste it.

Mouth: 4 - pretty chewy and thick for a low ABV stout.

Overall: 4 - this is the kind of stout you can really drink all day. Very pleasant.

Picked this up at the brewery from the New England trip in October 2019.

Pours a dark brown color, brown head, 1/3". The aroma was less coffee than expected, which is par for this and double shot. Got a mild impression of creamer/vanilla in the nose. Nothing bad, just compared to their massive hop noses, the coffee is understated in comparison.

Taste was easy going enough, that vanilla creamer feel impacts both the taste and mouth feel, nothing to heavily roasted in terms of malt quotient and quantity. At this point I'm like, hey this is nice, but is it like, the top 1% of all beers nice? Prolly not. I do agree with the "airiness" descriptor, this is definitely light feeling enough that pushing through a pint of it is basically effortless. Plenty smooth. Everything comes together in a mild way, the coffee, roasted malt, vanilla. They made a pretty good stout that didn't strive for imperialized sludge Chicago pour territory.

Presentation: 16 oz. can with the canning date printed on the bottom. Served in a glass coffee mug.

Appearance: The one finger, very dark tan head goes away fairly quickly and  leaves behind a thin foam ring and some patchy lacing. It's a deep, dark, pure black color with a hint of a reddish, very dark amber hue on the edges when held up to light.

Taste: There's a coffee and dark chocolate bite right away but it never gets too bitter. That's balanced out by the vanilla and brown sugar flavors.

Mouthfeel: It's silky smooth, velvety and very creamy. Full bodied without being being cloying or too much to handle with low carbonation.

Very good head retention. Body is dark brown, with an equally dark head, and apparently clear. It really looks as though a cup of coffee was carbonated.

Initially, while cold, the nose was all coffee, but the more it settles, the more vanilla starts to dominate, bringing along with it tones similar to maple, toffee, and brown sugar. Perhaps even a mild note of bourbon; it's rare to have vanilla bean additions so expressive on the nose.

Very similar on the palate, as well - even a touch of heat from the bourbon vanilla beans. It's sweet without rising to dessert stout levels. The coffee and vanilla dance back and forth; ultimately, the vanilla wins out, especially by mid sip. Drinks a touch "bigger" than the singe digit ABV, but not unpleasantly so. The sweetness is actually a little tough to nail down, drawing influence from all of the ingredients. Definitely thicker, as well, than most beers in this range; it's a fantastic overall mouthfeel, filling and creamy.

Sampling a cold 16 oz can poured into a snifter. The beer was picked up at the brewery in early February.
The beer pours a dark black coffee color with minimal creamy tan head foams up about 1 cm and fades to a sturdy edge layer and some surface islands. These islands remain on the surface throughout my sampling.
The aroma is dark chocolate malt and some light and sweet coffee. I also get a bit of roasted malt and hints of vanilla mixing together.
No real hop presence on the nose and wouldnt expect to have boozy nose with only 6.4%.
The first sip reveals a silky smooth texture with a medium body and very fine and tingly carbonation.
Very drinkable and smooth beer.
Flavor is what you would expect for style, brewery and from the nose.
Some roasted malt and sweet chocolate malt with a bit of brown sugar mix together up front, this moves to some sweeter vanilla notes and a bit of coffee too. The sweetness lingers a bit after each sip and does make my lips a little sticky.
I dont get any hops on this malty brew and the ABV is as expected, hidden.
A very nice sweet stout, glad I got a chance to try a can.

can poured into a snifter

Pours very dark brown with a mocha silky head with good retention. Aroma has warm espresso notes, the vanilla being well balanced, not too strong. Taste is rich and dense and very smooth with milky coffee notes. Feel is very smooth and soft, no alcohol burn, light bitterness.

Drank from a 1 pint can purchased at Tree House Brewing Company, Charlton, MA
10/10/19
Served in a tulip

Pitch black appearance. The shimmery, oily looking body was topped by a finger-tall, tight, frothy, mocha colored crown that slowly dropped to a thick, resilient collar. A sheet of patchy, drippy lacing trickled down the glass.

The flavor was similar to the nose. Rich and malty on the front end. Nice mix of caramel and roasted malts. Bit of actual caramel as well. Dark roast coffee appeared next. The coffee however was somewhat less punchy here than in the nose. Chocolate fudge or Hershey’s chocolate syrup came through in the center. More roast and espresso on the back end and the finish. Touch of bitterness. A nice melding of sweet and bitter notes (caramel, fudge and roasted malts) lingered after the swallow.

The mouthfeel felt quite thin initially and the liquid seemed rather under carbonated. As the beer moved along the palate, however, a fine, frothy carbonation appeared and gave the body a super creamy and slick frothiness. Pillowy soft and supple. Really spectacular.

There are so many reasons why people love Tree House, and perhaps the thing I love most about them is their ability to produce such a wide array of relatively low ABV stouts that punch far beyond their weight. Although the vanilla in this Single Shot variant was surprisingly subtle, the overall beer was still terrific. Allow this one plenty of time to open up, as it continues to improve as it warms.

16 oz. can. Inky black with a huge mocha head. Smells of vanilla, sharp coffee, lactose, and chocolate. Tastes of coffee with strong vanilla. Both sharp flavors. Lactose is sharp too. Sweet chocolate. Slightly deeper and richer in the back end. Finish is bitter coffee and vanilla. Medium heavy and creamy. Tasty but sweet and a little too sharp.

poured into a tulip glass via can

color is a nice over roasted coffee brown

smell is vanilla bean coffee, just as the name implies

taste follows the nose...I felt there was more vanilla bean here than the Double Shot w/ Vanilla bottles I've had

carbonation is low, mouthfeel is medium

one of the best low ABV stouts I've had..its amazing how much flavor is packed into this can