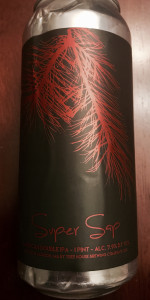 Notes: Super Sap is an imperial interpretation of Sap brewed with the spirit of the holiday season in mind! It is intensely kettle and dry-hopped resulting in an immensely hop saturated beverage. Don’t be fooled by the name - Super Sap pours a hazy yellow color in the glass and emits aromas of grapefruit, tangerine and papaya. The flavor follows suit with a pulpy grapefruit note as the predominant characteristic. Super Sap finishes gently with a soft pine-like bitterness buoyed by a fluffy mouthfeel. We hope it can contribute positively to a festive celebration this holiday season.
View: Beers | Place Reviews
Reviews: 93 | Ratings: 489 | Log in to view all ratings and sort
Reviews by KevinL:

Pours a faintly pale orange. Like lemon-meringue. Yeasty and turbid, but a pleasant soft shade of pineapple juice. Glows beautifully in the sun. Like a crisp winter sunset illuminating the horizon.

T - grapefruit and orange. Orangina? Brings me back to my college days when the only reason I bought the stuff was because of the name. Heh. Yeasty and wheaty. A touch rindy, a bit pithy. Crisp, hoppy, fresh flavors distanced from tha juice. Lemon zest and wintry pine in the background. Bubblegum comes out more as it warms, but interestingly enough, I think reg Sap has more flavor in that department. It's all over the nose though. Getting some papaya and stringy clementine. Resounding bitterness as I would expect from perhaps what is Tree House's most bitter (base) beer. Finishes with some skunky resin and leaves a mealy pith in the mouth. Getting some floral woodsiness as it warms. Like those Christmasy candles everybody lights. Piney but also sweet. Lingering flavors include mango and dragonfruit.

F - dances lightly on the tongue. Dangerously drinkable. Crisp and clean and to the point. Like bed sheets. Not the comforter, but when you do the snake thing with the sheets where you snap your end and they go flying in the air and gently settle on the soft peach fuzz standing attention on top of your goosebumps. Oh that's nice.

O - excellent flavor-laden brew in a different vein from Tree House. Perhaps their weakest IIPA, but that's a ridiculous claim to make when you view the word "weak" relatively. It's like saying last year was the weakest UConn Women's basketball team in the past four years, but they won the championship those same four years. It improves upon Sap in many ways, but I wish it were ALL the ways.

This beer pours a murky dark yellow color with a creamy, one finger, bright white head. Retention is moderate and there is a ton of thin spotted webs of lacing left all over the glass.

Smell is a wonderful mix of citrus and tropical fruit that really bursts out of the glass. Grapefruit is the star of the show, but tangerine, mango, papaya, candied orange and pineapple are all prevalent as well.

Taste is the same, but comes across slightly muted when compared to the intensity of the flavors in the smell. There is also a touch of bitter pine on the finish.

The feel is light side of medium, smooth and very soft, but not nearly as juicy as the other TH offerings. In fact this one finishes very dry by comparison.

Overall this is another amazing beer from Treehouse. Full disclosure though, regular Sap is my absolute favorite beer. It is so fruity and juicy yet it also manages to be so piney with a bite at the same time. This beer turned the pine and bitterness down and turned the fruit flavors all the way up. And while it is excellent, I prefer the original.

S: Pine and dried flowers in the forefront but some orange citrus undertones, slight honey sweet malt, and an occasional whiff of sugary peach (yeast derived?) as it warms.

T: Thickish resin and pine, moderate dried flowers, light honey and malt. Sort of a chalky taste, too. Light and somewhat rough bitterness on the finish.

M: Fairly creamy, with medium-full body that’s cut by medium-high, somewhat sharp carbonation. The creaminess gives the impression of muting the flavor, making this not as flavorful as you might like.

O: Kind of interesting as an old meets new school, what with the hazy pine-forward (rather than tropical/citrus/stone fruit) IPA.

This one pours a bright and hazy golden orange, with a small fluffy head, and lots of lacing. It's honestly as beautiful looking as this style gets.

This smells a little bit floral and piney, with some syrupy peach, perfume, grapefruit, and tangerine.

This is definitely not Tree House's best. It loses the killer clean zestiness and bitterness of Sap and Ssssap, and kind of just feels like a normal DIPA. It feels slightly underattenuated, and a little overly sweet, with a not quite enough bitterness to match the name of the beer. There are still some nice flavors here- peach, grapefruit, and tangerine, but it feels a little syrupy and a little perfumey.

This is medium bodied, and super soft and fluffy- the mouthfeel is definitely a highlight of this beer for me.

This has a lot of good things going for it, but the aroma and taste are a bit off for me. This is not TH's best.

Awesome beer.
Perfect balance of pine and juice. Hazy big white head - typical TH
Classics TH yeast strain comes thru given it the tropical feel along with the pine.
Seek this out. Great beer. Best of the saps

First time trying Super Sap but love TH IPAs so a high bar was set. Nose is the only thing disappointing here. Damn near perfect body for a NE. Gummi bear-esqe taste love the citrus but TH does this better than anybody making it juicy without feeling like someone added citrus. Top tier in my top 5 favorite treehouse IPAs.

Picked-up eight cans at Tree House in Charlton for about $4.80/ can. Solid brew, but something missing, just tastes a bit off. I will look forward to trying this again.

I think I am getting a less than stellar example of this beer. This review will serve as a placeholder until I can revisit this

Just received a nice haul of TH from a buddy out there and this was the first one I cracked..

Murky hazy yellow body. Notes of papaya and grapefruit on the nose... extremely tropical. On the initial taste I got a very tropical flavor followed by an amazing piney hop bitterness. Proper.