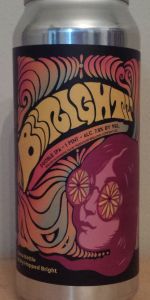 Notes: BBBrighttt was created to be an intense yet elegant showcase for one of our favorite hops - Mosaic! It builds upon the base beer resulting in an amplified flavor profile as a function of additional kettle and dry hopping from the base recipe. Mike here at the brewery describes it as an “explosion of Mosaic”. Lauren says the “flavor bursts in your mouth”. So together we describe it as an explosion of Mosaic flavor in your mouth.
View: More Beers | Place Reviews
Recent ratings and reviews. | Log in to view more ratings + sorting options.
Ratings by Beerjawn8:

The most meh of the treehouse beers

Notes via stream of consciousness: Once again I have to ask myself, what is this? I've never been able to get any Treehouse beers so they're all new to me. It's labeled as a double IPA at 7.8% ABV but that's all they give you. It's a different kind of label than usual so this must be something that's normally produced. It's poured a hazy - just hazy - golden body beneath a two finger thick head of slightly off-white foam. The aroma is bright and fresh with notes of pineapple, tangerine, and mango. There's also some floral, grassy, and lightly piney character. On to the taste... WOW! that sweet tropical fruit reminds me of the tropical Lifesavers candies. There's no banana or coconut but everything else is there, even the melon. Stunning! It's obviously got a moderate bitterness to it but there is a little bit of acidic "hop burn" that helps it to finish dry and a little bit earthy and spicy. Other flavors you might find are guava, passionfruit, and berry. In the mouth it's medium bodied and gently crisp, and as usual the head has held up really well and leftbehind some great lacing. I am really loving on this one! It's not that hazy or cloudy, and the body doesn't have that fluffy feel from lots of extra proteins, but the flavors and aromas are there and it's super easy to drink, unlike a lot of the Treehouse NEIPAs which are full throttle palate wreckers. Two thumbs up on this one. Sometimes simple is better.
Review #7,993

16 oz can poured into a tulip pint glass. Pours a clear, effervescent, bright yellow/orange with a moderately-sized creamy head. Aroma and flavor feature sweet tropical fruit (mango, papaya, overripe pineapple), OJ, sweet malt, and some grassy/herbal/dank hop notes. The flavor is not that "bright" and tends more in a treacly direction. Mouthfeel is slick with a hint of booze. Overall it's just okay, one of my least favorite TH IPAs.

Poured into a Treehouse teku

Taste is pine, citrus, herbs , joint of earthiness on the finish

poured from a 16oz can into a willi becher pint glass. pours a vibrant clear gold until the very end of the can which spills out clumpy milky orange. the mixture is light gold with a frothy white head. smells of pine, honeydew, a bit of tropical fruits. taste is similar with a noted dank finish to it. it’s very clean tasting and it really is a mosaic showcase. i think besides Galaxy Bright and variants have proven to work best with their original hop. mouthfeel is usual TH. thicker than most. moderate carbonation. almost creamy. overall, a nice mosaic hop showcase here.

Drank from a 1 pint can purchased at Tree House Brewing Company, Charlton, MA
09/27/19
Served in a teku

Gorgeous appearance. The liquid poured a nearly crystal clear, straw yellow hue and turned slightly hazy as some of the sediment toward the bottom of the can sneaked into the glass. A tight and fluffy, three-finger tall, bone white crown rose above the body and slowly fell to a bubbly mass. Thick, craggily lacing coated the glass and stuck around until the drink’s end.

The aroma was amazingly fruity and bright initially. Tropical fruit notes dominated. Loads of ripe guava, honey drizzled mango and freshly cut papaya. There was a subtle, sweet floral presence as well. Some candied citrus notes were also detectable. As the head dissipated, the fruitiness subsided and dry yeasty notes took over. Later, however, the fruity notes reappeared but came across much differently. Citrus was most apparent. Big tangerine presence. Orange oil was also noticeable, along with some ruby red grapefruit. Toward the drink’s end, the dank, earthy, Mosaic hop notes finally reared their head.

The flavor profile was practically all citrus from start to finish. Orange notes dominated on the front end. Both flesh and rind. Tangerine was apparent as well. Pineapple came through in the center. Pithy, citrus rind-like notes appeared on the back end and lingered in the finish. Fairly oily, resiny and bitter.

Nice creamy, lighter bodied mouthfeel. Slightly thin for the style but enjoyable nevertheless. The liquid contained a medium bubbled carbonation that turned soft and slick on the palate.

While I am typically not the biggest fan of most beers in Tree House’s Bright series, I have to applaud them for creating a lineup that is highly drinkable and notably different from the more commonly found turbid New England-style IPAs. This was quite refreshing, in more ways than one.

Picked-up two cans at the Tree House Brewery in Charlton for $4.80. Canned-on date of 9/27. My sixty first brew from these guys. Very nice TH brew, a notch below the upper echelon.

Overall pretty solid, great tropical fruit and citrus with nice base malt, juicy soft, gets a touch earthy dank but thankfully not oniony or too dank with the mosaic

From can into wide tulip. Deep hazy orange gold colour, frothy white head. Beautiful Mosiac hop notes on the aroma, smashed blueberries, tangerine, herbal. Taste is quite juicy along with strong herbal overtones, plenty of citrus, I can see some of the green onion/rosemary herbal-ness but all very nice, very punchy, tied together with a soft bubbly carbonation coating the palate. A little dank, with hoppy oiliness coating the finish, along with an inviting aftertaste. A bit bitter, and a bit oily compared with Tree Houses other DIPAs, I think some of there others were better in my books, but this still stands strongly with a lot of flavour.

Pours a pale yellow gold, lightly hazy. Aroma is citrusy, floral, herbal, and dank; very inviting. Taste focuses on the citrus and floral notes, the herbal and dank weedy notes are more in the background along with a hint of green onion. The dank weedy and herbal notes intensify (to its benefit) as the beer warms. Medium bodied with moderate carbonation. As the beer warms it turns from a focus on citrus and some green onion to a more an herbal, dank profile which I very much enjoy. I’ve enjoyed Bright since my first can 3 years ago from Monson and this variant in the lineage.