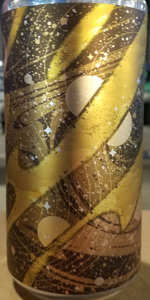 Notes: We are excited to announce a new addition to our milk stout family: Nervous Energy! Featuring maple syrup, cinnamon, and vanilla, Nervous Energy aspires to emulate the character of classic french toast. It pours pitch black in the glass, and gives off strong aromas of maple, cinnamon, coffee, and whipped cream. The flavor follows suit, with all of the flavors in balance and nothing overwhelming the palate. It is pleasant and nostalgic, arousing memories of cool weekend mornings comforted by rich, carbohydrate heavy breakfasts. A beer fit for the season. We think you will enjoy this beer tremendously, and sincerely aspire for it to contribute to your autumn celebrations in a delicious way.
View: Beers | Place Reviews
Reviews: 32 | Ratings: 158 | Log in to view all ratings and sort
Reviews by WunderLlama:

“Sweet confusion under the moonlight”

A: Jet black with some rich brown around the edges - opaque - pours with a small, tan head, fades to virtually nothing except for a small collar, but still leaves some nice streaks of lacing

S: Despite the description claiming "strong aromas of maple, cinnamon, coffee, and whipped cream" I think the primary aroma is the milk stout - there's a lot of milk chocolate and dark chocolate, maybe some burnt chocolate malts as well - somewhat roasty, minor burnt notes - underneath the milk stout, I definitely detect some cinnamon and maple - sweet lactose sugar as well, but I would not make the jump to "whipped cream" - maybe more of a vanilla ice cream, as there is some nice vanilla bean aroma - might be overly sweet from the smell, but we'll see about the taste

T: Yeah, it's sweet - but somehow, despite the onslaught of sugar, it's not what I would describe as cloying - loads of chocolate, mostly milk chocolate, some semisweet chocolate as well and some hints of dark chocolate - slightly roasty, maybe some light roast coffee, the only burnt notes are from what I assume are chocolate malts - somewhat nutty - cinnamon adds a nice amount of bite, and both maple and vanilla are nicely represented - maple candy - some burnt bitterness that lingers - lots of lactose sugar, a bit much, even for the style - some additional sweetness in the malts, with some biscuit and molasses

M: Medium to heavy, decidedly chewy, not exactly a clean finish, but not really possible for the style

Classic French toast? Maybe I am holding Tree House to an unfair standard, given their pedigree of more or less perfecting the NEIPA, but I was hoping for something truly special. This kind of tastes like someone burnt French toast and then threw it in a blender with some cinnamon sticks and vanilla ice cream. I like it, but I'm not heartbroken that the can limit on this was 2.

Mouth is fuller bod, creamy thick lush, decent carb, a flash of alcohol but not much

Overall pretty nice, nice all around but not out of this world

The pour is obsidian black with the most gorgeous dark tan head you’ve ever seen. The maple is immense identifiable on the nose, and there’s also coffee and vanilla notes, too.

The maple is prominent on the taste, too, and there’s also cinnamon and coffee notes, and vanilla at the very end of the taste. The mouthfeel is creamy and full, to a greater degree than I’ve seen in most of not all beers of this style I’ve had.

Tree House is known for their IPA’s. I thin their stouts are better.

Yep, I typed that.

A - Poured into a Kate the Great tulip a nice dark brown almost black with a thin mocha head that fades to leave light wisps and a thin blanket.

T -Taste is similar to the nose with nice sweeter maple syrup and candy. Little cinnamon hotness. The vanilla is quite prominent. Coffee is solid but not overly aggressive.

O - Overall this was a very solid stout with pleasant additives. Quite enjoyable.

L - in the wise words of DJ Khaled... another one? This one pours much darker with no head action until after the beer is poured. Darker than brown paint. Brown-ass head to boot.

S - sweet aromas abound, dripping with molasses, brown sugar, and Graham crackers. Sugary milk chocolate and Mexican hot (iced?) chocolate. My nostrils may be broken, but getting some burnt popcorn in this one too.

T - woof, monster splash of cinnamon, cocoa, and maple candy up front. Huge, engulfing flavor piles on the milk sugar, coffee candy, and cool whip. So much bittersweet dark chocolate and at the same time syrupy sweet french toast. Warming and spicy. Lively. The description of morning breakfast is spot on. The finishing syrupiness is quickly faded by a crisp, chilly dryness that tidies this one up with a bow.

F - spiritual unrest had a better mouthfeel, but this is still buttery smooth, viscous, and an absolute delight to force between your teeth.

O - loving the maple-heavy sugariness in this one. Has all the makings of Sunday morning decadence, perhaps even that of Christmas morning. The saturation seems to pull its punches toward the end as hoppy freshness dries things up, which is a good and not-so-good thing. Guess we'll have to wait for GM to really pile on the sinful decadence.

The pour is jet black with a half-finger of tan head. The head is gone in a hurry, leaving some splotchy lacing as it settles into a ring around the top of the beer.

The aroma is what some might call, "stupid". There's a huge wave of maple syrup, followed by sweet bread, cinnamon toast crunch, marshmallows, and dark chocolate. The back end has a faint hint of roasted hazelnut coffee.

The flavor has plenty of dark chocolate, maple syrup, and cinnamon on the front, followed by roasted coffee, sweet bread, and whipped cream. Tastes like a beer made at IHOP.

The feel is medium-full bodied with moderate carbonation. Smooth, creamy and faintly syrupy. Carbonation is a bit too lively, but otherwise a good mouthfeel.

Overall, another fantastic milk stout by Tree House. They continue to make dessert like beer without it ever being cloying. This one definitely tastes like french toast but there's plenty of bittersweet dark chocolate and coffee notes to provide balance.

Taste: chocolate stout base mixing nicely with vanilla and maple. Just the right amount of coffee to balance the sweetness. Little warming hint of cinnamon in the finish.

Overall: This is an incredibly well balanced stout. Not overly sweet. Check all the right boxes in the flavor department and has a nice thick body without any booze. I am very appreciative that this is not a cinnamon bomb as this flavor easily overtakes so many stouts that are adjuncted with cinnamon. I feel like cinnamon gets away from so many brewers who use it and this is easily the best use of cinnamon in a stout that I can remember in a really really long time. Treehouse nailed this one! No one needs any nervous energy towards this stout...its a sure bet. So you can calm down now!