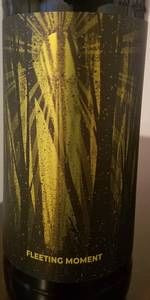 Notes: Fleeting Moment is an Imperial Milk Stout brewed with Coffee, Chocolate, Maple Syrup, Ceylon Cinnamon, and Vietnamese Cinnamon. It is carefully concocted to emulate the flavor of a big pile of freshly made french toast drizzled in Maple Syrup. We utilize all natural ingredients during every phase of the brewing process to create a thick, decadent beer that tastes of dark amber maple syrup, freshly ground cinnamon, coffee, and swiss dark chocolate. This is a breakfast beer through and through and one that is best savored in a snifter over a hearty Sunday morning meal. Fleeting Moment allows us to reflect upon the seemingly ordinary moments in life that come and go in a flash, and may often be taken for granted -- like the simplicity of breakfast with friends or family. Enjoy!
View: Beers | Place Reviews
Reviews: 24 | Ratings: 106 | Log in to view all ratings and sort
Reviews by artrocity:

Traded for this earlier this week and unlike my can stash, I'm able to clear out my bottles pretty quickly. Thankfully, I had this and the other bottles that my friend brought to me fresh as all of them have been among the best beers that I've had in quite some time! While the description of this was spot-on, I would not have this for breakfast as it was quite thick, strong, and richly potent!

Of course, the pour to this was brown, thick, and topped off with a soft, silky mocha head. A good amount of webbed lacing was left behind as I sipped this as the beer's consistency was exactly what I'd expect in an English Sweet / Milk Stout. Not a strong aroma to this but there hints of chocolate, cinnamon, and coffee but the taste was really what blew me away here. Subtly thick, complex, and oh-so-easy to fall in love with, the cinnamon wasn't overpowering as would be the case with so many spiced and fall seasonal beers. The dark chocolate really took hold as this warmed up as the maple syrup made me feel like I have having pancakes with my breakfast and french toast. Some creamy sweetener emerged during my latter sips as a cloying aftertaste had me regretting that no cafes in this vicinity were open during this late hour of the night!

Lots of booze here but you'd never know it unless you looked at the label or the numbers on here. This was indeed a fleeting moment for me as the liquid in my glass was gone before I even knew it. Tree House has been hitting it out of the park with their bottled offerings and with so many fresh ingredients in the right proportion, it's easy to see why here. Please keep these coming!

Stellar appearance. The viscous, pitch black body was topped by a two-inch tall, super tight and creamy, khaki colored crown that slowly dropped to a thick, bubbly collar. A wall of foamy lacing coated the glass and lasted until the drink’s end.

The aroma was a total mocha bomb. Freshly brewed, medium roast coffee came to mind. Loads of milk chocolate as well. Vanilla was also noticeable. Bit of maple too. Rich, smooth and appropriately sweet for the style. As the beer sat, an ashy quality came in waves. Later, the sweet milk chocolate and vanilla cream notes intensified.

The flavor was also super coffee forward but definitely roastier than the aroma. Big malt presence on the front end. Loads of roasted malt character. Darker roast coffee was noticeable. Some caramel malts were also apparent. Milky vanilla notes came through in the center. Touch of maple. Moderately sweet. The roast intensified on the back end and the finish. There was a subtle booziness as well, but this subsided with time.

Fantastic rich, creamy, fuller bodied mouthfeel. Super slick and smooth on the palate. The liquid contained a fine, greater-than-average effervescence that fluffed up beautifully. By the drink’s end, the sugars in the beer left a slightly sticky film on my lips.

Although the cinnamon was undetectable and the maple character was relatively subtle, Fleeting Moment is still a very impressive milk stout. That said, this might make for a better nightcap than a breakfast beer.

16.9oz bottle poured into a snifter.

A: Deep black. Tight, fine-bubbled light brown head. Not much in the way of lacing.

T: Cinnamon is apparent on the palate first. Maple syrup next. Fudgey. Coffee grounds and a kiss of smoke and roast. Dark fruit skins. Stays sweet throughout, but not overly so. Fudge, syrup, coffee, and a lingering smokiness on the finish.

O: It’s quite sweet, but stops just short of being cloying. I think the cinnamon actually saves it. It provides just enough of a counterpoint to the sweetness without overwhelming things.

Appearance is solid black, minimal tan head and tiny bubble lacing. Nose is pungent toasted malts, while the flavor is rich with maple and cinnamon, coffee acidity and a bitter bite in the close. The result is an excellent sipper, a stout that is lush and delicious.

Picked up wa few cans while visiting the brewery recently.

Pours dark brown with a soft, lacy head. Fragrant with maple syrup front and center with hints of cocoa and coffee.
Rich and velvety with a mellow, roasted flavor. Lots of complexity. Lots of flavor. Some sweetness upfront but more lingering bitterness than many milk stouts. Leaves you wanting more. The alcohol is a bit concealed with the roasted, malty flavors. Finishes dry with with a touch of spice. Wonderful to enjoy by the fire or on a cold, sunny day.

pours black with some carbonation bubble pockets and mocha head. smells of roast, an unidentifiable sweetness and a touch of cinnamon. taste is chocolate, roast (i assume this is their attempt at the coffee aspect of this beer), subtle maple sweetness and again, a touch of cinnamon. pretty muddled and lackluster to be honest. feel is typical TH. not thick but not thin either. little too much carbonation for my liking. overall, seems like false advertisement or maybe i just expected more of the adjuncts to pop.