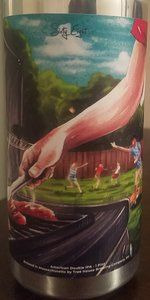 Notes: For this curious exploration into the art and science of hoppy beers, we utilized a cornucopia of our favorite hops including Amarillo, Citra, Simcoe, & Galaxy paired with our singular house yeast and a huge addition of oats in the grist. The resulting beer is delightful in its depth, character, and individuality! It pours a dense opaque yellow in the glass, presenting with notes of pineapple, red grapefruit, honeydew melon, pear, and stone fruit in this complex and fruity delight. It is the most intriguing and boldly unique of the recent oat based Curiosity offerings, and is sure to please the palate of those who enjoy a juicy IPA with character, distinction, and intense flavor.
View: Beers | Place Reviews
Reviews: 6 | Ratings: 44 | Log in to view all ratings and sort
Reviews by hughesm12:

Pours hazy, creamy gold in color with 1/4 inch head. Taste is tangerine, white grapefruit, pine, and starfruit. Heavy bodied, medium carbonation, and bitter. The last few Curiousities I have tried have been excellent. This is more middle of the road. Not a bad ipa, but I have had way better from Tree House. A bit of a disappointment.

Drank from a 1 pint can purchased at Tree House Brewing Company, Charlton. MA
05/17/19
Served in a teku

Cloudy, pale straw yellow appearance. The nearly opaque body was topped by a frothy, finger-tall, bright white crown that quickly fell to a thick, bubbly collar. Drippy rings of lacing cascaded down the the sides of the glass and stuck around until almost the drink’s end.

The aroma was solid initially but not amazing. Really hoppy and clean but perhaps a bit nondescript. Nice honeydew melon presence. Some generic tropical fruit notes were also apparent. Guava perhaps. Ripe peach and apricot came through as well. Bit of tangy tangerine too. As the beer warmed, the hops became much more punchy. The melon and citrus notes really intensified.

The flavor profile was very similar to the aroma on the front end but finished more pithy and bitter than I anticipated. Honeydew melon was again most prominent. Tart, wheaty and lemony in the center. Grapefruit appeared on the back end. The beer finished with a mix of pithy orange and grapefruit peel and a touch of bitterness.

Curiosity Fifty Eight is a terrific beer with a fantastic fruit-forward aroma and pillowy soft mouthfeel. That said, it was definitely a half step behind Curiosity Sixty Six, Sixty Seven and Spring, which I also picked up on the same visit. Even though many of Tree House’s new hoppy beers seem to be very similar to each other, that might not be such a bad thing.