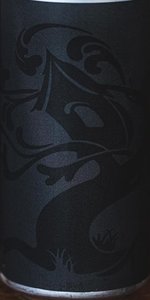 Notes: Raven is a Black IPA inspired by the changing of the seasons and the cravings of heartiness that come with it. It is an excellent companion to any cool weather occasion. It is brewed with Simcoe, Centennial, and Amarillo hops paired with a carefully considered addition of roasted malt.

Raven’s recipe and process were designed with the balance between resinous hop character and gentle roasted malt bitterness as the most important characteristic to make this beer as interesting and enjoyable as possible.

Following extended cold-conditioning, Raven pours a super dark brown to black color in the glass, leaving behind a dense and rocky head. In its aroma and taste, it conjures perceptions of citrus and pine balanced by sturdy light chocolate and roasted malt character. In spite of its relatively simple construction, it presents with a hefty amount of character and intrigue.

Raven is a beer at the heart of who we are, and what we aspire to do. It delights with its tastiness, drinkability, and hearty construct. It drinks well on its own, but it drinks particularly well with seasonally appropriate meals like smoked meat or beef stew. We expect it to age well and evolve over the next several months while being stored away in the refrigerator.

Quoth the Raven: "Nevermore". That might have been the motto of this beer as it was dark, mysterious, and oddly enough, timeless. No, this wasn't the typical fare from Tree House but it was just as nicely crafted as their more popular offerings, although this was a style that I wasn't terribly familiar with or accustomed to. Once I got past that, this was quite enjoyable and easy to quaff from the get-go!

Of course, this poured dark, slick, and topped off with a tan head. The lacing left behind was quite extensive as the well-defined ring near the top of my pint glass, bled down to the one below it, as that continued the trend and so forth...

A ton of roasted malt and oatmeal could be found in the nose along with some bitter chocolate, burnt coffee, roasted malt and mild weed out of something from Humboldt Brewing. Roasted, quite dry, and darkly bitter, the taste was what I'd expect out of a Porter of Coffee Stout although this beer was truly an American Black Ale at heart. If there was such a thing as an Imperial Schwarzbier, this would be it as it had heft, dark bread, earthy spice, and roasted malt all in harmony with each other.

Yeah, there was enough booze in this although I felt it more than tasted it on the palate as the hints of dark plum, red grape, and dates weren't enough to counter the bread and oats that were more potent here. Canned on 1/24 of this year with "NEVERMORE" written above it, this was a great representation of the style that held it's own throughout my time with it. While it might not appeal to a wide audience of imbibers, there was plenty to like here as this dry, bready beer was balanced, flavorful, and true to stylistic form!

A - Dark brown pour with light and thin cream colored lacing, no carbonation.

S - Chocolate with some citrus and light peat buried down under.

T - Chocolate malt along with a citrus mixture, finishes balanced with a light lingering char in the back of the mouth along with a little citrus.

O - Not a fan of this style but it works.

A: Poured from the can into a tulip glass. Body is black. Even when backlit: black. Nice 1+ finger tannish head on top, which retains well.

S: Let down here - not a big, roasty and bitter nose like I like in a Black IPA. Some roast, a hint of dark chocolate. It's a good profile, but far too tame. Gotta stick my whole nose in the glass and to get anything.

T: Follows the nose, with roasted malt up front followed by slight char/charcoal and modest dark chocolate/bitter bakers' chocolate. Finishes with some juicy, fruit hops underneath. It's good. Very good.

M: A little on the thin side at first blush, it finishes more juicy in feel, oddly enough.

O: A bit of an enigma. I love this style and yet haven't seen many of these beers in the last year or two - so I was very excited when I saw that Tree House had one available today. . . . I'm happy with this, but had higher hopes. It's probably better than I'm suggesting, a victim of high expectations.

Picked-up three cans at the Tree House Brewery in Charlton for $3.80. Brand-new brew from TH. Not usually a black IPA fan, but this was a pleasant surprise, and tasted better the more I drank. Very-well balanced.

a; Mostly opaque black with clear ruby at the bottom, inch and a half thick tan head receded to thick surface foam and dense lacing.

t: Nicely balanced malt and hop combo with hardly any roasty char, coffee or chocolate notes except as a slight aftertaste. Moderate hop bite with some subtle char which lingers on the mainly dry finish.

o: I have not seen or had many black IPAs in my six plus years in craft, but this is the most IPA-like one I can recall. Usually when the style is attempted some aspect of the roasted barley dominates over the hops. This one seems nicely balanced and perhaps the most drinkable of its type. High marks for accomplishing that!

Pours a dark brown color with a 2 finger fluffy khaki head. The head is stubbornly persistent and leaves a crown of lacing as it ultimately settles into a thick cap of foam.

The aroma brings notes of pine and citrus up front; namely grapefruit and orange rind. Then comes a rush of roasted malts, bringing notes of medium roast coffee and milk chocolate. There's a slight smokey note on the back.

The flavor starts off with notes of orange and grapefruit pith, with just a faint lingering spiciness. Then there's some roasted malts, chocolate, and caramel. Finishes smokey and leathery.

The feel is medium bodied with moderate carbonation. Creamy and smooth. Very drinkable.

Overall, this is a great Black IPA that comes pretty much exactly as advertised. You get the hops and the malts and the yada yada yada. Good beer.

S - faint cereal grains and grape must. More vinous that I think was intended. Dry pinot gris with hints of tangerine sweetness.

T - definitely hoppy and herbal. Fresh and crisp. Lightly toasted grains and coffee ground bitterness. Sweet lemon-lime candy, nectarine citrus, and bittering grapefruit rind. Finish is as hoppy as it begins with some serious lasting power on the bitterness.

F - full, almost overly so for the flavors and general vibes of this beer. It's on the lighter, subtler side, but a good amount of heft is still present. Blends well with the bitterness.

O - the BLIPA is definitely an underutilized style of late. Raven is overall subtle, but hoppy out the ass. Caramelized and citrusy, it is a good example of the style, but much like Ma, isn't anything to write home about.