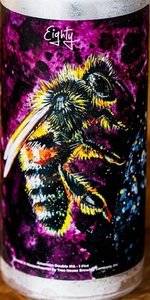 Notes: With Curiosity Eighty, we utilized a relatively crystal malt heavy grist in conjunction with fresh Galaxy, Simcoe, & Citra hops to try to achieve a nectar-like amalgamation of these additions. The resulting beer pours a rich orange color in the glass, and achieves heavy fruit-centric characteristics that are as much a function of carefully coaxed yeast ester development as they are a function of the fruity hop nature of the selected hops. We taste and smell heavy notes juicy fruit gum, peach nectar, honeydew melon, and ripe guava. This is a stand out rendition, indeed, and one that has us excited to fold what we learned from brewing it into our core line-up.
View: Beers | Place Reviews
Reviews: 5 | Ratings: 42 | Log in to view all ratings and sort
Reviews by hughesm12:

Picked up a few cans of this at the brewery last week.

A - Poured into my Duvel tulip a nice super hazy deep orange with flashes of gold hue with a fat almost three finger white head that faded slowly to leave thick lacing and a dense, creamy blanket.

S - Aromas of big, almost musty tropical fruits and citrus. Pineapple, papaya, light flashes of guava. Big clementine oranges with some well rounded dankness. Flashes of pine from the Simcoe with some much dank hops going on it almost over shoots into the earthy realm of hop aromas.

T - Taste is similar to the nose with big bright tropical pineapple notes as well as some generic fruits and maybe a flash of stone fruit. More of that dank hop flavour. I swear I almost get a kiwi like flavour along with melon. As it warms guava comes out more, especially on the finish to go along with more of that fun melon taste. There are good juicy citrus and almost bubblegum like flavour smack dab in the middle before it goes to those really interesting muskmelon flavours. Up front it's flavour profile is more of the usual Tree House, however, that finish is definitely something new...or at the very least uncommon.

O - Overall this was very, VERY enjoyable mostly because of that finishing flavour. The tropical citrus flavour that's up front is fairly typical for Tree House but that melon on the backend is far from common. That combination is really something. I wish it was a little more assertive on the nose but overall this is incredibly, incredibly nice. Sometimes Tree House beers come across as 'green' when they're really fresh but this doesn't suffer from that at all. Excellent.

“Buzzin’ for all the juicy fruit”

T.F: Just like it smells. Big time juicy... citrus and rind, tropical fruits... mango, guava, pineapple. Creamy on the mouthfeel and medium bodied. A bit sticky. More citrus and fruit at the finish.

O: A fantastic DIPA. Checks all the boxes for the style. Outstanding.

Pours hazy, orange gold in color, with 1/3 inch head. Taste is pineapple, melon, lychee, and peach. Medium-heavy bodied, medium low carbonation, sweet. Tastes like Very Green with a more oaty body. One of the better curiosities that I have had. Should have gotten more of this. Way better than the Curiosity 81 that I just had.