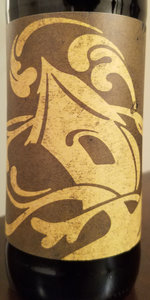 Notes: Permanence is an imperial milk stout brewed with coffee, chocolate, & a huge dose of maple syrup. Below these additions lies a complex base of chocolate, caramel, and dark crystal malts. Permanence amplifies everything about Impermanence while carving out its own space of individuality and charm. The aroma of rich maple is so potent it sticks to your nostrils. The flavor is equally indulgent, coating the tongue with decadent flavors of sweet milk chocolate, dark amber maple syrup, maple ice cream, and chocolate covered maple caramels. This beer will contribute positively to cozy winter celebrations, we are sure of it - Enjoy!
View: More Beers | Place Reviews
Recent ratings and reviews. | Log in to view more ratings + sorting options.

Im sampling a cold 500 ml bottle. Its been in my fridge for about 1.5 years. Time to open it for sure. Im pouring into my trusty snifter.
the beer pours a black coffee color with no light passing through the glass. A fizzy dense, tan head foams up about 1 cm and fades quickly to an edge layer. this thin layer sticks around throughout the sampling.
the aroma is bold and malty, I get brown sugar and toffee mixing with dark chocolate and some coffee grounds. There is some light maple syrup on the nose also, and I suspect it was bigger when this beer was fresher.
The first sip reveals a medium body with syrupy and sticky texture. Very minimal and soft carbonation on this beer.
Flavor is fudge brownie and a bit of brown sugar, briefly some roasted malt or coffee and then tons of maple syrup. The flavor lingers sweet maple long after each swallow. Definitely sweet, but also good maple flavor here too.
No hint of the ABV anywhere on this brew.
Another big milk stout from Tree House that is sweet and enjoyable. glad to have tried this one.

Intro: 16.9 oz. poured into a tulip glass. Shared with a friend.

Smell: Sweet but not too much. Chocolate and maple standout, minimal coffee aroma

Taste: Followed along with the smell. First off, you notice the sweetness but not cloying. Milk and caramel in the middle.

Drink: Very easy drinker, easy to get carried away. Take your time and enjoy the goodness

Conclusion: When it comes to milk stouts, Tree House has it hands down. No question. Exceptionally crafted brew. I’ve had 8-10 now and not a bad one in the bunch. Just pick your additive and dive in.

Pours a deep black. Aroma which is a nice combination of chocolate, caramel, coffee & maple. Taste is quite sweet - milk, chocolate. roasty coffee and maple. Mouthfeel could be a bit thicker. Overall, an incredible stout.

S -- Milk chocolate, roast, caramel, burnt brown sugar, medium roast coffee, some maple (but less than expected)
T -- Largely follows the nose. Fairly sweet, but not sickly. Again, not nearly as much maple as expected
F -- Medium+ mouthfeel, medium carb
O -- For the price point, not the most impressive

A: Pours a thick jet black with a calico brown head aloft. Really surprised by how fizzy the head as it just sputtered ahead like after opening a bottle of cola.

S: Finding the caramel to be very poignant - fruitier with blackcurrant and bright pineapple - and also nuttier with toasted walnut. There's an earthy moss note that stops short of peat, but like a maplewood sauna; or, a mesquite-fired coffee roaster. Moderate-strong and sumptuous coffee and chocolate.

M: Full-med bodied that starts to lull you with a lush a creamy feel, but can surprise you with a sparkling exuberance.

T: I really like how the maple sweetness plays out, and I would never figure the maple was paramount. Starts with an impactful coffee astringency that really tampers down on the sweetness. Just some really good burnt toffee/pecan hotcakes made on a well-seasoned griddle. Served with some melted dark chocolate and a side of maple butter. Eventually, the earthy/nutty astringency yields to a sweeter coffee ice cream with maple flavored espresso chips.

A: Pours a pitch black color with 2 fingers of head that fades down to a thin cap

S: Roasted malt, milk and dark chocolate, coffee, and maple up front. Some caramel in there as well

T: Follows the nose. Starts off with a mix of roasted malt, dark chocolate, and cocoa/milk chocolate. Coffee and maple come through shortly after. Finishes with lingering coffee and roast

O: A great imperial milk stout that does an impressive job at balancing the chocolate, coffee, and maple. Not overly sweet and the 10.4% is extremely well hidden. Definitely worth checking out

A- Tulip pour from the 500ml bottle with a pitch black body and a dark cocoa brown head. The head has a creamy texture and is fairly sturdy staying around for a while before it leaves a thin ring around the edges. Lacing is a mixture of spottiness and small sheets.

S- Maple syrup right off the top and pancakes naturally come to mind. The chocolate is big as well with fudge and dark chocolate bars coming out with dark roast coffee in the back drop. Roasty, nutty, caramel and slight fruity hints round it out.

T- Dark chocolate is huge and the maple syrup is also pretty strong in the flavor as the base stout ends up showing more here as well. Roasted barley, chocolate malt, toasted nuts, toffee and a touch of dark dried, spiced fruits. Dark roast coffee beans round it all out.

MF- Luscious and creamy and I have said it before but few breweries nail down mouthfeel like Tree House. Smooth and rich heavy body with a light slickness and a warm finish.

A few really standout flavors in the maple syrup, dark chocolate and roast malts with the coffee in there as well further back. Fairly sweet but a nice bitter presence and still mostly balanced.

Appearance: 4 - attractive lacing, but nearly no head. Very black, but on the thin side.

Nose: 4 - faint coffee, no maple, and a ton of chocolate.

Taste: 5 - ooo, very different from the nose. I get almost no chocolate, but the coffee/maple combo is divine. Perfect ratio.

Mouth: 5 - much thicker than it looks. Had to gulp it down.

Overall: 5 - one of the best maple beers I've ever had. Tree House really showed off their expertise here.

Poured into TH Tulip glass. Smell was heavy on the maple with some coffee and chocolate. The taste was similar, though not cloying. Thick mouthfeel. Delicious.

Split this into two sessions. The second session I had recently eaten something and noticed that the flavor of the beer had died down quite a bit. I recommend drinking this before or long after a meal as it was superior prior.

A: Poured from the bottle into a Tree House tulip glass. Body is thick black with crimson edges when backlit. Small crimson/tannish head on top.

S: Not as strong as I expected in the nose: maple and lactose, with some vanilla.

T: Good flavor profile - I was afraid the maple would overwhelm, but it doesn't. Milk stout foundation of lactose, milk chocolate and coffee. Finishes with the sweet maple. Modest boozy heat from that ABV. The more I drink it, the more the sweet maple/maple syrup is noted.

O: A very good beer, but falls a little short in my "Tree House Expectations Are High" category. I'd probably give this a slightly higher score if it was from some unknown brewer who wowed me with this; as it is, I'm modestly "disappointed," though that's not really the right word. A little too sweet for my tastes - could use some more "roastiness" (though I appreciate that as an Imperial Milk/Sweet Stout, this is what you get). . . .

Drank from a bottle purchased at Tree House Brewing Company, Charlton, MA
Served in a teku

Big thanks to hopley for grabbing me this bottle.

The beer poured fuller bodied and pitch black. A tight, creamy, inch-tall, caramel colored head topped the liquid and slowly fell to a thick, frothy, lasting collar. Excellent retention. A blanket of spotty lacing coated the glass from top to bottom and lasted until the drink’s end.

The aroma was roasty and sweet with subtle maple and coffee notes. Somewhat underwhelming initially. As the liquid warmed, the nose improved considerably. The maple really came forth. Good dose of milk and dark chocolate as well. Malty and robust. Vanilla was also noticeable. Sweetened and creamed coffee too. A touch of booze appeared later.

Like the aroma, the flavor profile was a bit muted initially but improved considerably with time. Super malty and rich up front. Big roasted and caramel malt presence. Sweetened and creamed coffee notes kicked in next. Fairly roasty. Huge maple presence in the center. Vanilla was also apparent. Some milk chocolate too. More coffee and roast on the back end and the finish. Subtle bitter espresso notes lingered after the swallow.

It has been a number of years since the guys at Tree House brewed Good Morning, but Permanence might very well be as good, if not better. Despite the big maple presence, the beer managed to avoid being excessively syrupy or sweet. All in all, this is a fantastic imperial milk stout that really shines when you allow it some time to warm.