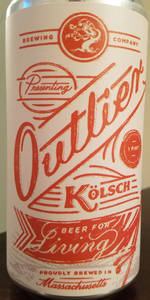 Notes: utlier is a Kolsch-style ale brewed to be eminently drinkable yet loaded with nuance, character, and individuality. It pours a glowing translucent yellow color in the glass with a puffy head that sticks around while you enjoy it. We taste a kiss of lemon, earthy noble hops, doughy malts, a hint of pear, gentle minerality, and a pleasant whisper of wheat that sticks around on the finish. Outlier is a beer brewed with tradition in mind, and the idea that nuanced, carefully crafted beers can enhance living in ways that few other beers can. We hope you enjoy it as much as we do.
View: Beers | Place Reviews
Reviews: 14 | Ratings: 55 | Log in to view all ratings and sort

16oz can poured into a Stange. Consumed over the summer, reviewed from notes.

O: On point. Of the classic styles Tree House has attempted, this is the best so far, I think.

L: A clear straw yellow with a finger of ivory head that faded fast. No lacing to be had.

S: A bright zing of lemon accompanied by muted notes of grain, grass, and hay.

T: Mildly bitter following the nose. Grainy. A little more on the cracker malt and grass spectrums but some herbal and mineral presence as well.

O: A little between styles i think. Reminded me of some European wheat beers also.

Taste of a European summer. Great rendition of one my favorite German styles--straw-colored pour, head disappears quickly. Deep malt character with a bit of a wheat bite. This will stand tall against any heat-fueled thirst.

T: Wet, lemon, good. No, just kidding (points if you got that reference). Lemony up front, though. Light malts, some pear or Asian pear (cool!). Neutral finish. A bit watery.

F: Light-bodied, moderately carbonated. Nice and crisp. Construction and balance good. Not the greatest complexity or nuance, but not needed, either. Perfect summer or poolside beer.

O: It strikes me this is Tree House's 25th best style and it still blows almost everyone else's away. Could drink this anytime.

Fairly clear straw gold with a 1.5 finger white head. Bread and fruit aroma carries over into the flavor with some pear and light earthy spice. Restrained bitterness. Lovely feel. Delicious.

Pours clear, gold in color with one inch head. Taste is grass and grain. Light bodied, high carbonation, sweet and crisp. Makes for a really good example of the style. Could drink this all summer long. Well done.

One of the lighter beers that I've tried from Tree House. It's well-crafted, and coaxes about as much flavor as you could hope for from this style. But at the end of the day, this is basically a fancy Miller Lite. There's no unpleasant flavors or aftertaste like you might get from cheaper offerings in the same style from big breweries, which made Outlier eminently drinkable and thirst-quenching. You could blow through a handful of these pretty quickly. But personally, this just doesn't pack the same flavor punch or carry the same rich mouthfeel that I want in a Tree House beer. Not going to seek this out again.

Drank from a 1 pint can purchased at Tree House Brewing Company, Charlton, MA
02/24/20
Served in a Willi Becher

Crystal clear, bright golden yellow appearance. The body was capped by a fluffy, finger-tall, bone white head that quickly fizzled away. No lacing whatsoever. With the exception of a few tiny bubbles streaming up the liquid, the beer looked almost flat.

The aroma was crisp and bright. Super lemony. Nice crackery malt presence. Hint of straw too. Solid overall, albeit not super complex. A bit of green apple appeared later.

Sulfur notes came through big time in the flavor. This definitely tasted quite skunky. Musty Pilsner malt notes were also apparent. As the beer sat, the sulfur really subsided. Like in the nose, crisp lemon notes were rather prominent. Lots of tart wheatiness too. There was a subtle white wine quality in the center. Subtle grassy hop notes were also detectable. Hint of mineral character.

Outstanding light, crisp, fluffy mouthfeel. The liquid contained a super fine and rather aggressive effervescence that turned pillowy soft and amazingly plush on the palate.

Outlier is a nice light and easy drinking yet tasty Kölsch that is a welcome relief from all the pastry stouts and excessively hopped IPAs that are Tree House’s calling cards. Despite the lackluster appearance and the initial sulfur notes, this was quite enjoyable.

16 oz. can. Pours mostly clear pale golden. Smells of bright doughy malts, light acidic and earthy hops. Tastes of bright sharp hops up front, doughy bready malt that turns to grainy, spicy hops in the back end. Light body. The sharp finish means it never feels watery. This is quite a surprise. I haven't enjoyed most of Tree House's departures from their IPA wheelhouse, but this is well done.

Pours a clear pale golden straw in color with maybe a half finger of soapy head that quickly disappears leaving a rather still and uninteresting looking beer. The aroma is very subtle but that maybe partly due to the lack of head; I do get some faint lemony and bready notes. Taste has a little punch of lemon zest upfront, waves of doughy malt, a touch of malty sweetness, bread crust, and a light earthiness along with a hint of bitterness in the finish. This feels medium bodied with moderate plus carbonation that adds some chew. I’m just surprised that this beer poured and appears almost still in my glass yet there is a definite perceptible carbonation when drinking it. After reading the back of the can this seems to deliver on the brewer’s intent; it’s absolutely a beer for drinking. It’s one that can be enjoyed in the background rather than something to be contemplated. If this had better head retention and a little more punch in the aroma I’m sure I’d rate this higher by a fair amount.

Interesting beer from Tree House. My first one of this style from them. 2/24/20 date printed on can, obtained straight from the brewery. Pours a slightly darker golden color with some fluffy white head and spotty lingering lacing that faded moderately quickly. Clean, crisp grain and cracker notes, bready malt, some faint muddled fruity hops. Maybe a little vanilla and caramel. Taste follows the nose, quite smooth and clean, easy to drink. Smooth mild slightly thin mouthfeel with good carbonation. Not bad, good for the style but I definitely prefer Tree House's IPAs and stouts.

Wonderfully Light and refreshing taste with crisp flavor and no poor after-taste. It holds its flavor sip after sip. Glad that TreeHouse has a lower alcohol offering in this non-IPA category that is basically like a high quality and glorious light beer. I will head back there next week and grab a case! Well done.

Overall this was more like a kellerbier without off flavors, or German wheat based lager, enjoyable but not really a kolsch

Picked up a can of this at the brewery and shared with JLindros.

A - Poured into my Kate the Great tulip a nice golden chill hazed hue with a thin, fizzy white head that faded quickly to leave light wisps.

T - Taste is similar to the nose with more of those good cracked grains, slightly sweeter, good faint corn like flavour, the hops are light and grassy. Finish is slightly astringent which is rather odd.

O - Overall this was a somewhat disappointing beer. I was really hoping to have a readily accessable (for the time being anways) well executed Kolsch down the street, however, there are various minor details that really prevent that. This is more of a 'kolsch style' type of beer as opposed to one that is stylistically true. A shame.

Outlier from Tree House Brewing Company
Beer rating: 88 out of 100 with 55 ratings