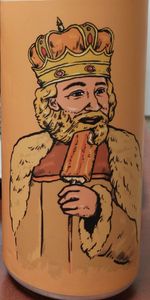 One month old. Can to wine glass.

Look: Pours a hazy brownish orange with a fluffy white head that lasts quite long and leaves plenty of lacing.

Overall: Usually I'm a purist when it comes to IPAs and not a big fan of lactose or any adjuncts in them, but this one really took me by surprise. Everything's very well balanced and the natural vanilla notes are a beautiful fit with the hoppy orange character of the base beer. I might even prefer this one over Julius. Fantastic beer!

S - hot damn, smells like vanilla extract. Ripe mango, Nilla Wafers, and those multi-layer wafer cookies. Butter cream and all the vanilla beans. I've never smelled vanilla in a beer like this before.

T - the intro to this flavor is actually mildly disappointing! Usually with the big boi TH beers, you're hit with a monstrous wave of flavor that pushes me back into my seat and requires a second or two to recompose myself. Not here... but soon after, the vanilla washes in. Vanilla bean and french vanilla ice cream. Herbal bitterness quickly follows up with a peppery hoppiness that somewhat overwhelms the vanilla. The most impressive feat about these beers is how well they nail the "orange" and "creamsicle" separately. Not as one unit, but first you get the orange coating of a creamsicle popsicle, then you get the soft vanilla underbelly. Then of course it blends together as if taking a giant bite. Beautifully crafted IPA despite some of the shortcomings. Finishes grassy and bitter with lingering vanilla bean undertones.

F - about as fluffy as it sounds. I've had thicker and fuller TH IPAs, but this one still feels like biting into a ripe mango then taking a shower in peach puree.

O - raw, earthy 'nilla bean unlike anything I've tasted in a beer that claims "vanilla". There is nothing cloying, sweet, or artificial about what's happening here. Vanilla in its purest form. Sadly, the hops are a bit overbearing which cuts into that glorious creamsicle flavor Creamsicle brought to the table.

Hazy yellow with a moderately sized white head and lacing. Smell features the huge orange and vanilla with light hop biters, faint mango and peach. Taste is much the same, but the sweetness begins to overwhelm a bit as you drink the whole pint. Doesn't commit to the milkshake, but isn't bitter or clean enough to be a true neipa. Body is creamy, bright, decently hopped on the finish but again sugar builds.

Picked-up a single can at Tree House in Sandwich for $6.55. My two hundred and twenty fifth brew from these guys. Canned on date of 12/18/21. Ridiculously decadent, ridiculously good.

Poured from a can dated 11/11
Bright cloudy orange slim soapy head no cap light lacing
Aroma of vanilla bean and orange
Taste is vanilla and orange rind slightly sweet
Mouthfeel is sticky with a smooth middle leading to a slightly prickly finish
To me it was like drinking a souped up orange soda. They say it can be used as a mixer and I would agree.

Can shared by Matthew. Cheers!

Pours an opaque burnt orange color with 2 fingers of frothy off-white head. Good head retention. Leaves a crown of lacing along the top of the glass.

The vanilla is more of an undertone on the taste. Otherwise it's just KJ. Still amazing, but slightly disappointing.

The feel is medium-full bodied with lower carbonation. Soft and creamy.

Overall, this is definitely Tree House dipping their toes into the "milkshake" IPA water. All things considered, it's excellent. But that's because King Julius is excellent. The vanilla adds a lot to the aroma, but not so much to the flavor. I'm sure at some point we'll see this beer with lactose and peach puree. It is inevitable. And unfortunately I'll love it. Sigh.

King Creamsicle from Tree House Brewing Company
Beer rating: 98 out of 100 with 62 ratings