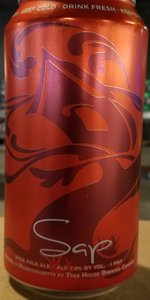 Notes: Our IPA brewed with Northwest American hops prominently featuring Chinook! A pungent aroma gives way to a delicate beer loaded with hop flavor. Soft notes of grapefruit, pine, pineapple, and young mango give way to a dry finish making this one hard to put down. We find Sap to be one of our most complex and intricate IPAs - We love it dearly!
View: Beers | Place Reviews
Reviews: 246 | Ratings: 1,536 | Log in to view all ratings and sort
Reviews by MisSigsFan:

Can is dated 7/28/16 so it's not the freshest. Pours a hazy copper color with a frothy white head. Smell is extremely piney. I can see why they call it Sap. There's also very subtle grapefruit and mango in there too. Taste is sort of bitter up front with pine and resin coming through with some mango, pineapple, and grapefruit. Mouthfeel is creamy and smooth, just like you'd expect from an ECIPA. Carbonation is basically perfect. I'm sure this is better within 1 or 2 weeks but this is still good. Not your typical "East Coast" style, in fact I would say it's very "West Coast" aside from the appearance and mouthfeel.

Whew boy! This certainly takes me back! I haven't had something quite like this in many a year. I got a story 'bout it. Like to hear it? Here's how it go... Winter break, sophomore year of college, '99. Decided to take a road trip to a very strange and isolated place... the NJ pine barrens. Well you wouldn't think that you can road trip for a couple of weeks in a state so small, but then you don't know how weird this place is exactly. It's one of those special places here on this god's good earth that defies all sensible logic and laws of reason. Time stretches incomprehensibly. Roads lead to nowhere and everywhere at the same time. And the shortest path across is surely to go all the way around. Having grown up in NJ, the mere idea of the pine barrens became a fantastic dumping ground for all things boogey and curious. If you had a fear, or dark fantasy it probably sprung from the barrens. Ok I'm getting carried away.... Long story short, me and Scotty Future met these "piney twins" but there were three of them (don't ask). We made out some, and they brought us home to meet there grandpa, and it turned out that he was keeper of a Golden Needled Pine, queen tree of the forest. It had a tap directly in it, and it poured what at that time was the most delicious beer we had ever quaffed. We fell under the spell of that beer, married the piney twins (all three), and lived happily for only god knows how long. That was until, we realized that we had a life to get back to. Scotty Future and I stole away in the dead of night, slew a demon or two, and liberated some imprisoned forest gnomes before finally escaping the barrens... It took us a while to accept that we'd never be able to indulge in such a beer again, until...

So I just had Tree House's Sap. Excellent stuff! Tastes just like the beer from the golden needled pine. Smells like it! Dry pine and light grapefruit lift up the olfactory senses. It doesn't assault the palate like some of the super juicy high end IPA's that I've had recently. It's definitely hop forward, with fresh pine and herb and slight spice and cirtus, but it's dry enough that all of that hoppiness doesn't stick with you too long and it remains refreshing. Same goes for the mouth feel. Love that. It's a beautiful bright golden color and just hazy enough to remain opaque. And it sounds like... beer doesn't make a sound dummy! ;) All in all, a really solid offering.

Interesting beer! Has the look of all the other popular NEIPA's hazy golden almost the signature of authenticity.
Smell I get is a tropical fruit not overly citrus like but more mango melon with pine.
Get a lot of that pine on the taste. Hence Sap?
Great feel. Does the hazy look always lend to a great mouth feel? Carbonation was good as well.
I said this was interesting because it wasn't a big juice bomb. It had that component but it wasn't the driver. Variety is the spice of life and to push this style in different directions and make it work is a testament to that.

It's the best piney west coast style IPA there is. It gets flak because it's not a juice bomb like TH's other offerings. But if you put this next to Heady Topper in a blind taste test, it's not even a contest.

Though many are quick to judge this one in a negative light, I find it a refreshing escape from the traditional citrus bombs that TH creates. As the name suggests, piney flavor punches the palate. The color mimicks that of all the other cloudy IPAs these guys pump out. It doesn't seem to come out very often, so I welcomed this one back to my fridge without hesitation.

I have been lucky enough to get a few different batches of Sap – I always try to make a trip when it's offered. Pours smooth without much froth. Color is hazy-bright gold, and less thick in the glass than other TH beers. Smells hoppy and crisp, like a simplified version of other Tree House offerings. Taste puts the hops out front, without the fruitiness of other TH beers, which I like. The finish is a slow & dry decrescendo into a piney finish that is subtler than expected. This is my favorite hoppy Tree House because of that very subtlety – it puts the hops on delicate display without the juicy complexity of other offerings. I sometimes wish it were more piney – maybe they'll come out with a "Super Sap," since Sap is a favorite that always draws long lines. It's very easy drinking, without enough body and zero cloying alcohol flavor.

Time to re-review as this has supposedly changed a lot since I first had it.

Nose is similar to what I had in my review before, mild piney spicy hops, light resin, hint citrus orange rind and a little tangerine like citrus, bit of orange rind, hint of sweet fluffy malt.

Taste starts with citrus hops, orange peel and orange creamscicle, not really the spicy hop profile anymore, into some resin and dank musty notes and into a mild piney slightly earthy forest floor note. The pine eventually comes out again, but not nearly like it was before. Fluffy slight creamy malt base adds a nice filler. Juicy overall and pretty tasty, with bitterness there but not rampant. The finish on the other hand really dries and bitter a bit more, with a bit of hop oil and resin lingering with more pine and hint of citrus, and a nice orange rind and orange creamscicle lingering. Late on the finish the pine and resin really start to come back through like the original as the citrus disappears.

Overall pretty nice. Def better than I had last time, less of that almost overbearing piney resin and more orange peel, orange creamscicle, with some rind, and a little piney forest floor like but not a lot. I really wonder if Nate changed this up on purpose since the first was way too much in the other direction and not that great of an IPA. It couldn't even hold a candle to the likes of Julius and Green, etc, but it was its own thing. Now it blends in a bit more to those other IPAs and probably loses it's own crowd. I def like it better now, but I'd still def enjoy Julius or Green more, and now it's lost it's own character. So good and bad for the change.

I love TH, esp Julius and Haze, but feel they missed it on this one. I really question them taking this from a Christmas beer to a full time offering. After standing in line for 2 hours to get 8 beers, I expected more, especially TH. I have tried 3 of the eight, but just don't get it, my guests will have to drink the other 5

Pours cloudy yellow with a moderate head and retention. Aromatics are pungently hoppy with plenty of earthy pine and hard peaches. Medium bodied with a soft, almost fluffy mouthfeel. Grapefruit with pithy citrus and pine resin on the palate. Firmly bitter and very dry with barley a trace of malt. Finishes with some mild throat heat and lingering pine bark.

My first Treehouse and pretty tasty. Nothing over the top but certainly a nice modern twist on an old-school hop.

Can: Poured a bright cloudy/hazy yellow color ale with a medium size white foamy head with good retention and some lacing. Aroma of intense tropical notes with some melon and mango notes clearly coming out as well as some residual sugar notes. Taste is a mix of floral tropical fruits notes with some mango and melon notes clearly identifiable, some residual sugar notes and loads of dry leafy hops notes. Body is full with good carbonation. Super enjoyable IPA that I would wish would be more accessible.

A: Pours a murky yellowish-orange with a two finger head that receded gradually to a frothy skim. Nice.

T: Taste starts out with a citrusy rind-like punch and moves into a nectarine like sweetness before finishing with a bitterness that sticks around.

M: A bit thin but it works here with a tight, medium carbonation.

O: Very enjoyable and fresh from the source. Solid.